LEGO is firing on all cylinders with the release of its newest 1,470-piece 1960’s Ford Mustang kit 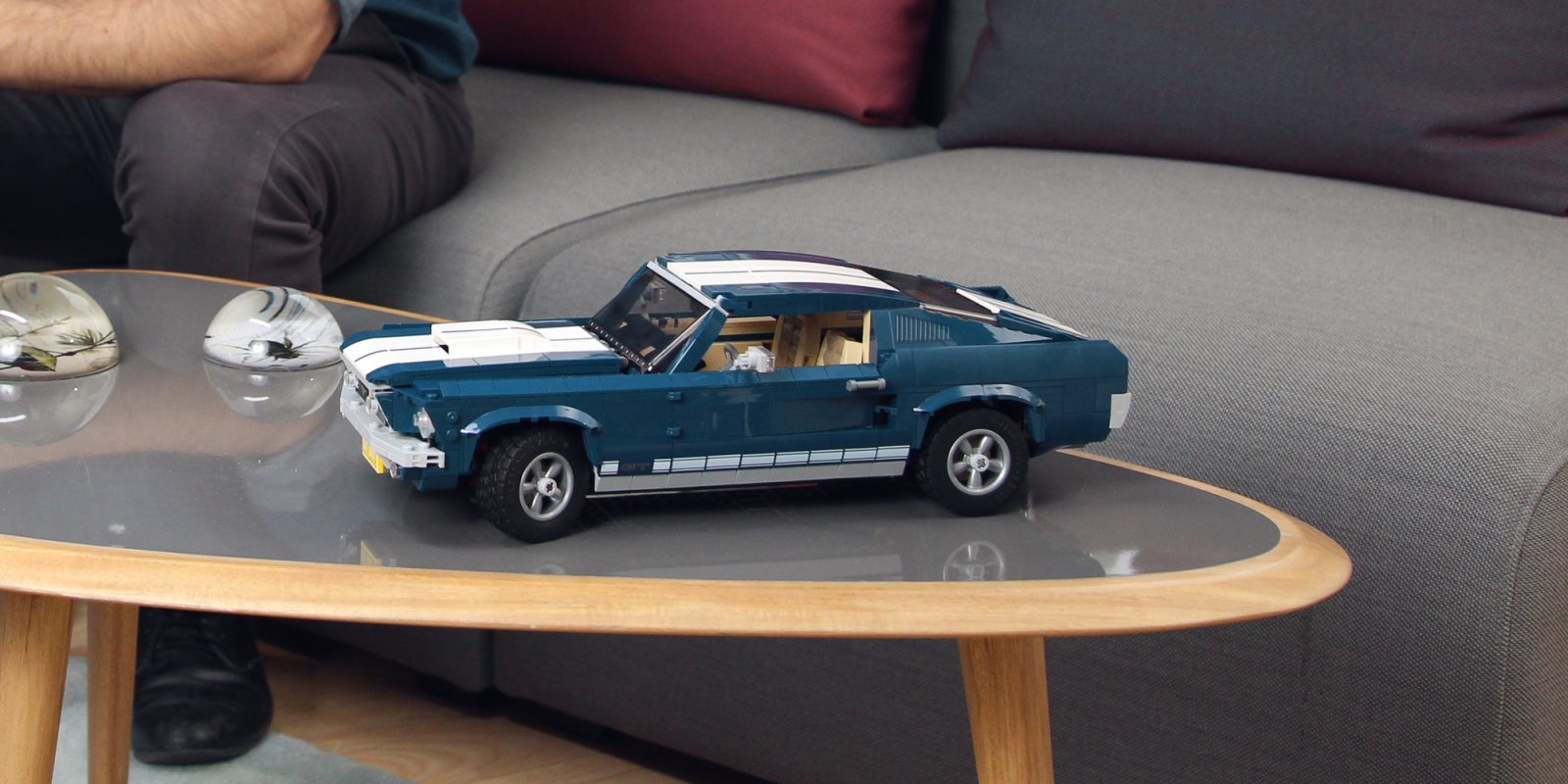 Today LEGO is expanding its garage of iconic brick-built vehicles with the release of a 1960s’ classic. Making its debut, the LEGO Ford Mustang will be hitting store shelves later next week. The upcoming old school muscle car build stacks up to over 1,470 pieces and includes plenty of authentic details. Head below for a closer look and to see when you’ll be able to take it off the lot.

LEGO hasn’t shied away from releasing glorious brick-built vehicles in the past. We’ve seen crowd-pleasers the Bugatti Chiron make its LEGO debut in the massive 3,590-piece Technic kit and many others. Today’s Ford Mustang release is no different, bringing yet another fan favorite in the world of classic vehicles to LEGO form.

At 1,471 pieces, the set is by no means a small build. Once fully assembled, the LEGO Ford Mustang clocks in at over 13-inches long and five inches wide. That’s right around the scale of another previously-released brick-built vehicle incarnation, the 007 Aston Martin DB5. 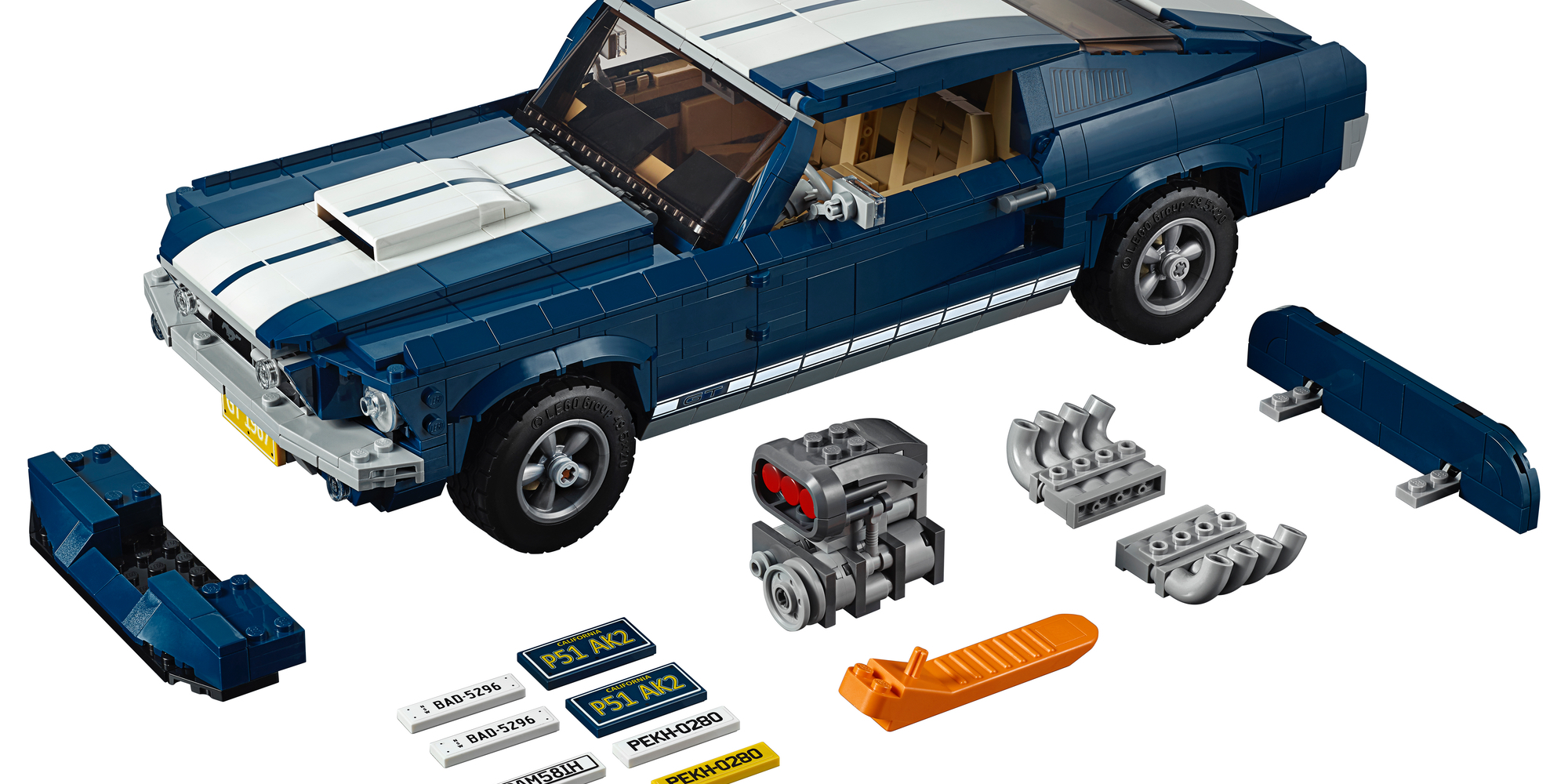 Based on the 1960’s Mustang design, there’s a lot of classic details packed into the build to show off. On the outside, there’s the ride’s classic dark-blue bodywork and of course, a white racing stripe. As you work your way into the LEGO Ford Mustang, details like the realistic V8 engine and decked out interior become apparent as well.

And with what might be one of my favorite inclusions, the LEGO Ford Mustang also features a printed mustang grille badge and 2 GT emblems. Speaking of new set-exclusive pieces, the build also packs all-new five-spoke rims and 2×8 brick with bow elements.

Another great inclusion with the LEGO Ford Mustang is that it touts a variety of accessories to help soup up the ride. Extra miniature builds like a supercharger, rear ducktail spoiler, beefy exhaust pipes and even a nitrous oxide tank help transform the Mustang into the muscle car its known for. 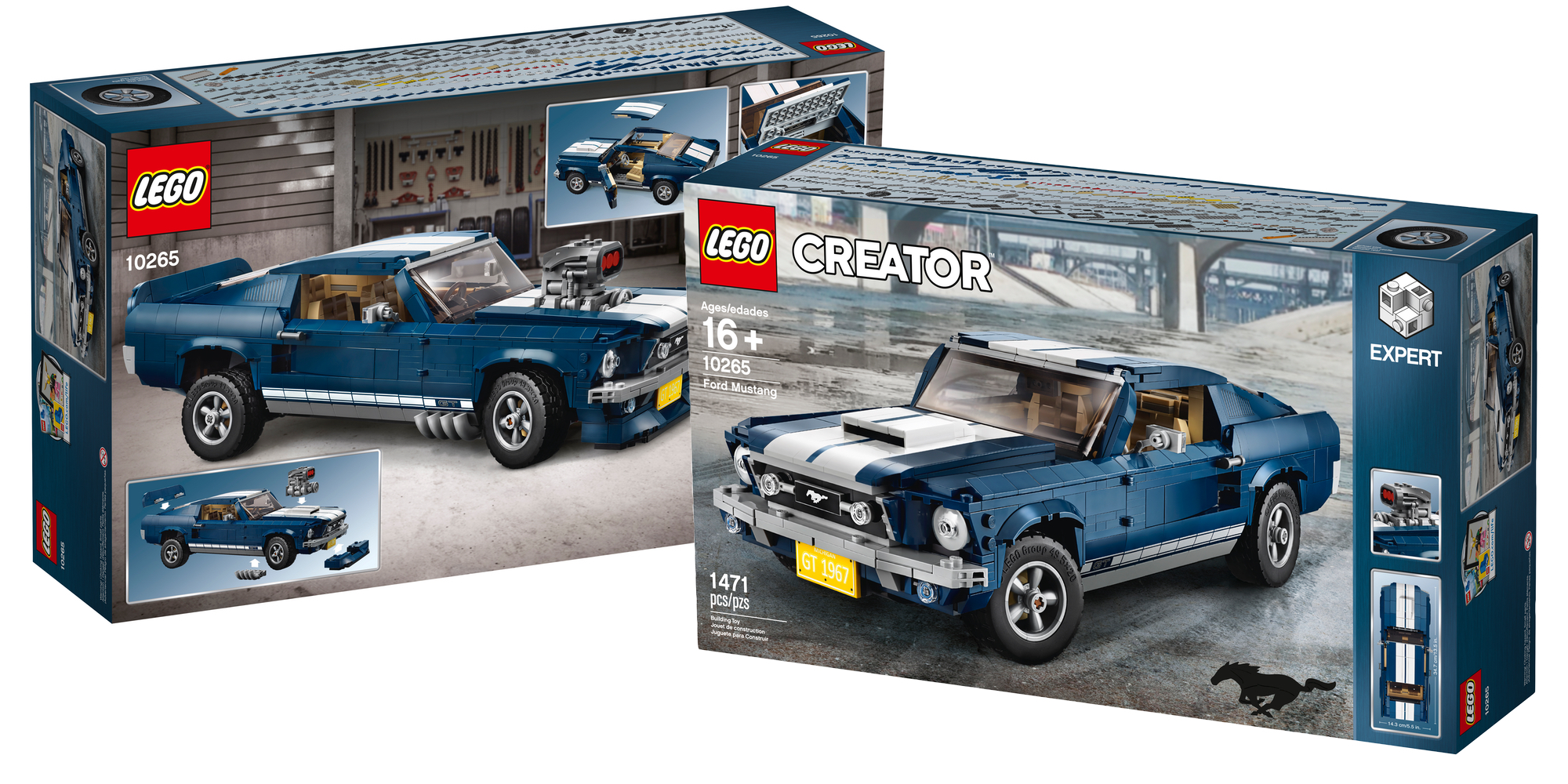 Those looking to bring the creation off the lot and into their own garages won’t have too long to wait. The LEGO Ford Mustang debuts next Friday, on March 1st. It’ll retail for $149.99 and will be available from LEGO’s physical and online storefronts. And with 1,471 included pieces, that $150 price tag is perfectly justified; a welcome change from some of the previous new releases. 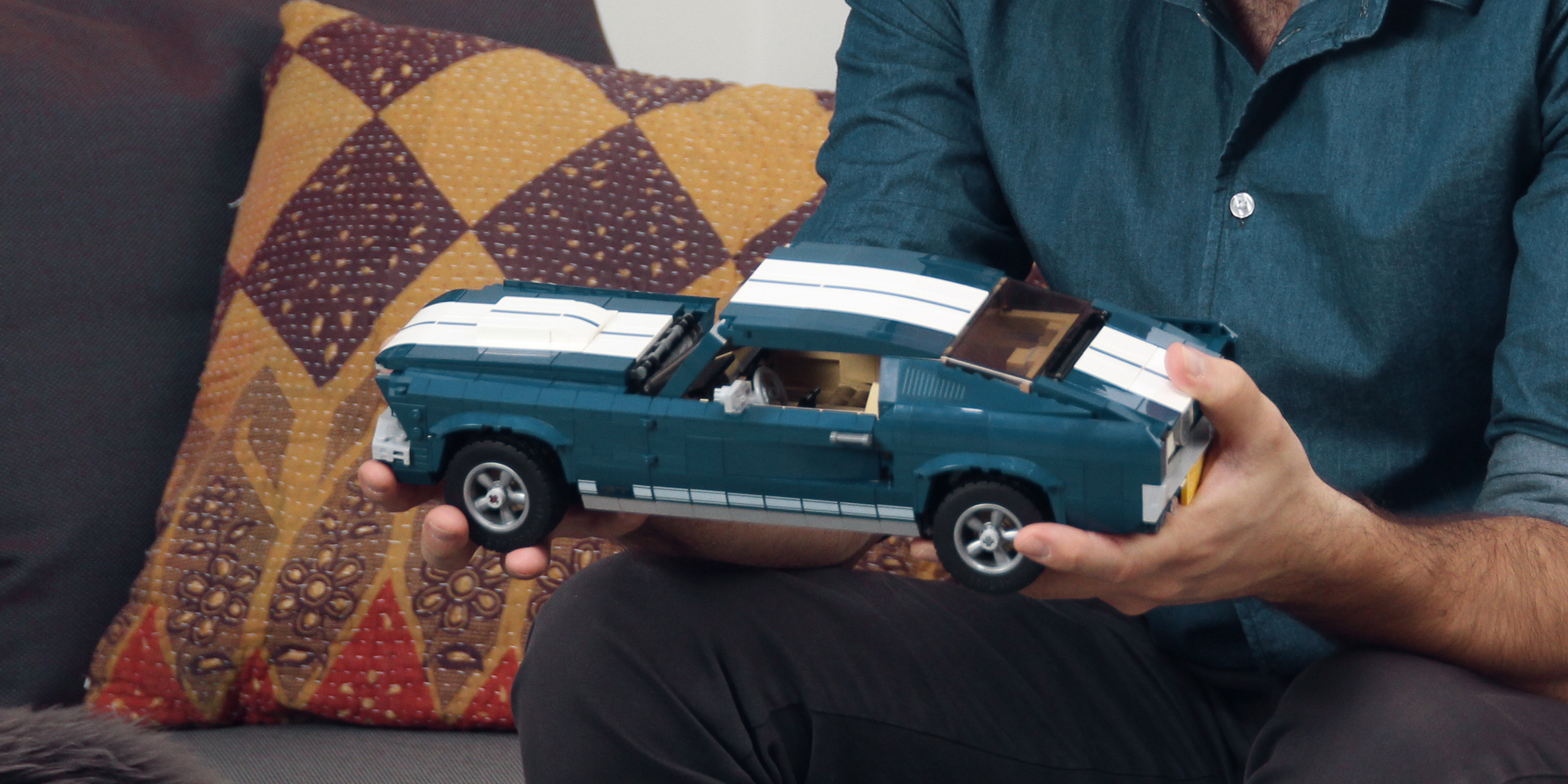 It’s no brick-built spaceship, but the new Ford Mustang is certainly one impressive model. The attention to detail that the kit’s designers were able to implement is nothing short of top-knock work. Much like the other iconic rides that LEGO has given a similar treatment to in the past, I’m positive that the Mustang will be a huge hit with LEGO and car fans alike.

Speaking specifically to the latter, it’s just one of those sets that really shines to non-LEGO fans. It’s sure to look great on display and the LEGO Ford Mustang will definitely make a unique conversation piece as well. Sure, I might not be the biggest fan of brick-built cars, it’s easy to recognize how popular this will be come launch. 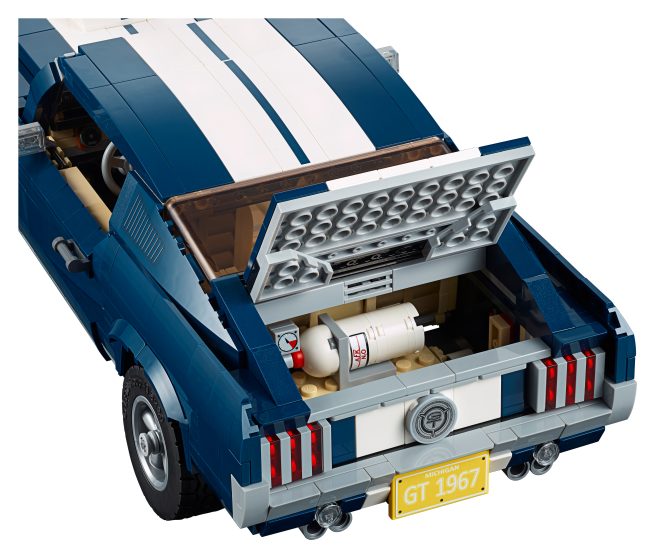 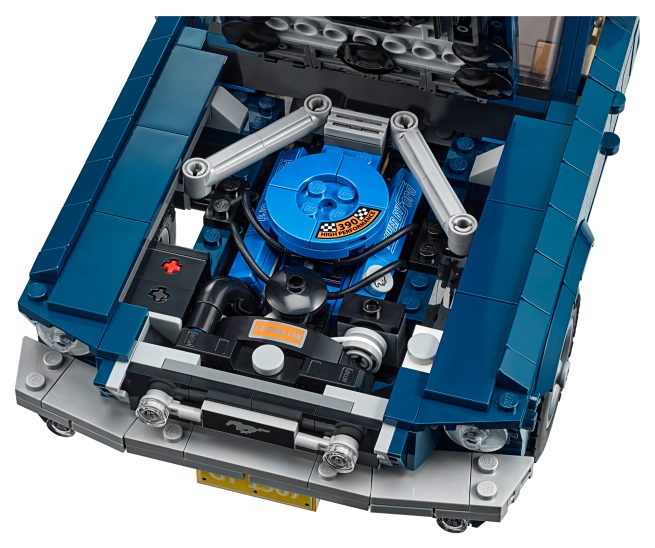 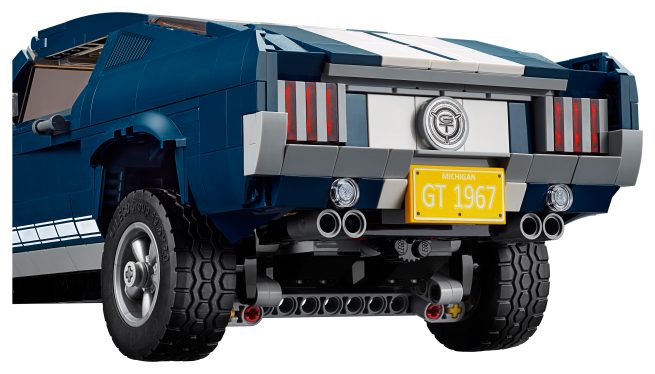 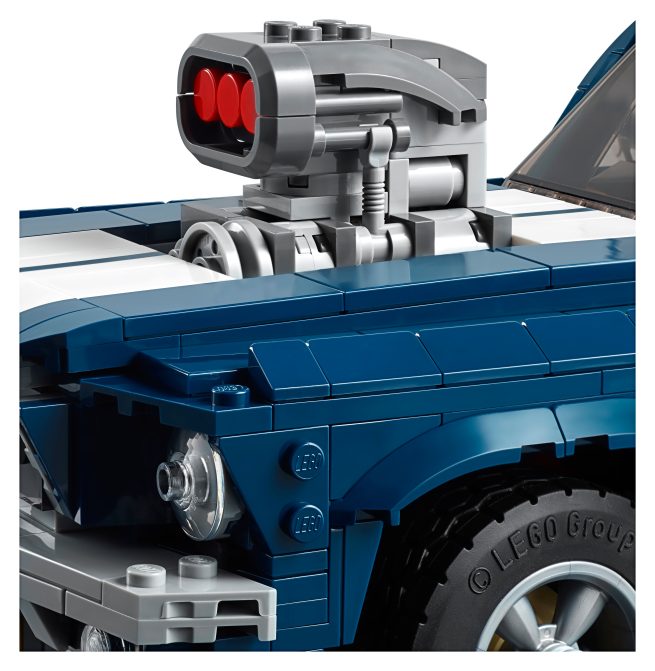 Discover the magic of an iconic 1960s American muscle car with the LEGO Ford Mustang, featuring dark-blue bodywork with white racing stripes, bonnet scoop, printed mustang grille badge, GT emblems and 5-spoke rims with road-gripping tires. Developed with input from Ford, this authentic replica comes with optional add-ons for customization, including a selection of license plates, supercharger, rear ducktail spoiler, beefy exhaust pipes, front chin spoiler and a nitrous oxide tank. You can even adjust the lift of the rear axle for an extra-mean look! Remove the roof panel or open the doors and you have access to the detailed interior with handsome seats, radio, working steering and a mid- console gearshift. Store items in the trunk or lift the hood to reveal a detailed big block 390 V8 engine with battery, hoses and air filter detailing. This advanced Ford Mustang building set has been designed to provide a challenging and rewarding building experience full of nostalgia and makes a great centerpiece for the home or office.