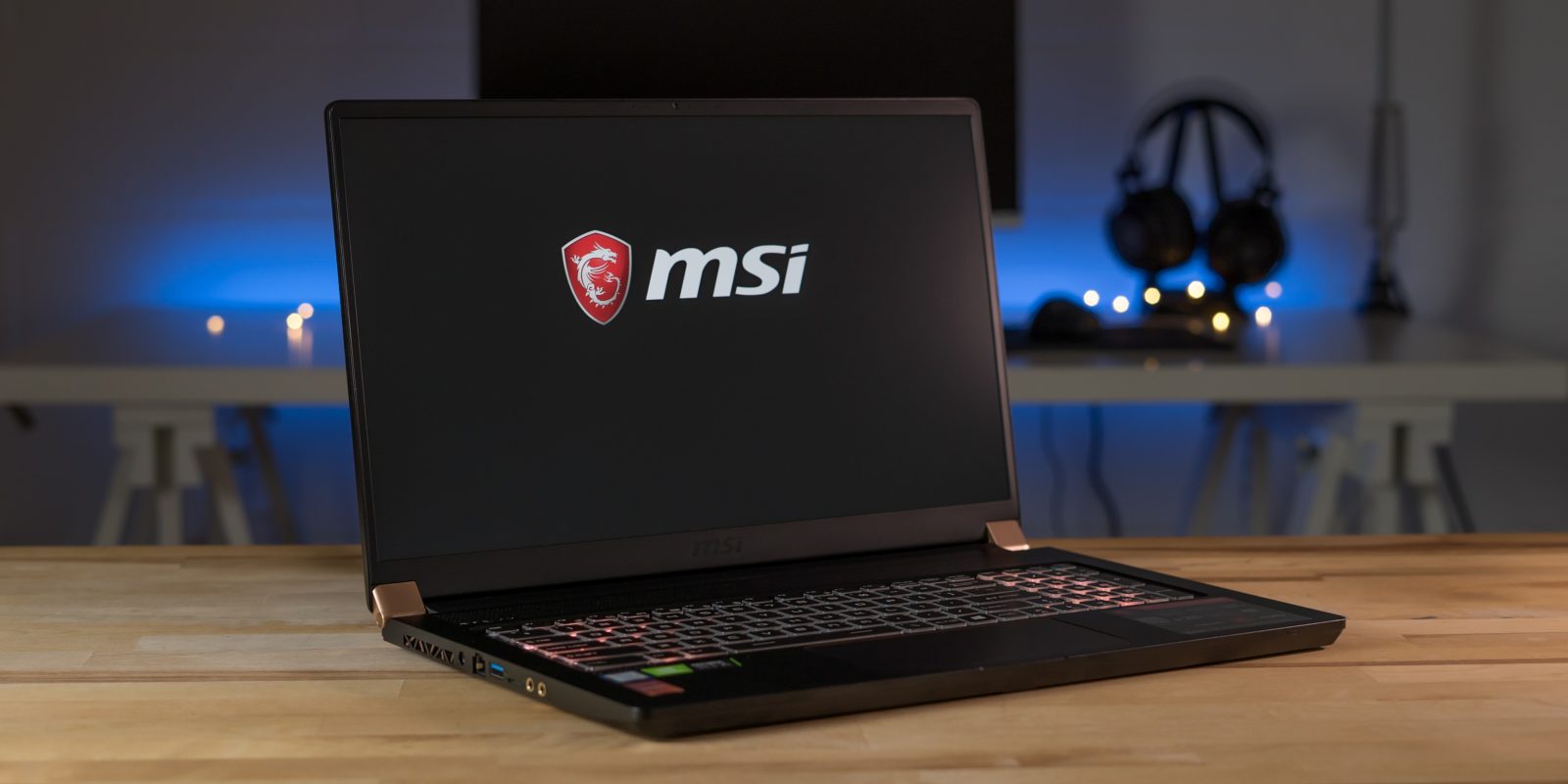 Earlier this year, MSI introduced the new GS75 Stealth gaming laptop with an RGB-enabled design and powerful RTX graphics. We recently got our hands on the new 17.3-inch MSI GS75 Stealth and put it through the paces. This 8SG configuration is top of the line – equipped with the Nvidia RTX 2080 Max Q GPU and a $2,799 price tag. Today we’re taking a quick look at the GS75 Stealth, head below for our unboxing video and first impressions.

With dark colors and subtle gold accents, the GS75 lives up to its Stealth name – distancing itself from it’s bigger and bolder brother, the GT75 Titan. The Stealth’s sleek design is just ¾-inch tall, and weighs about 5-lbs. The gold MSI badge on the front of the laptop is an elegant addition. Everything on the GS75 looks well polished, but the shell is more flimsy than I expected. It is fairly easy to bend which detracts a bit from its high end appearance. To keep the size of this 17.3-inch laptop down, the thin bezel hugs the 1080p 144Hz display nice and tight.

For connectivity, the GS75 Stealth is well equipped with Thunderbolt 3, ethernet and microphone in. Three Type-A USB 3.1 ports and a HDMI port also add to usability. I was a little surprised to see a MicroSD card slot. As a DSLR user for video, I love SD slots on laptops, but I’m not sure why there is a micro option as well. None the less, it’s a nice feature for GoPro users and the like. 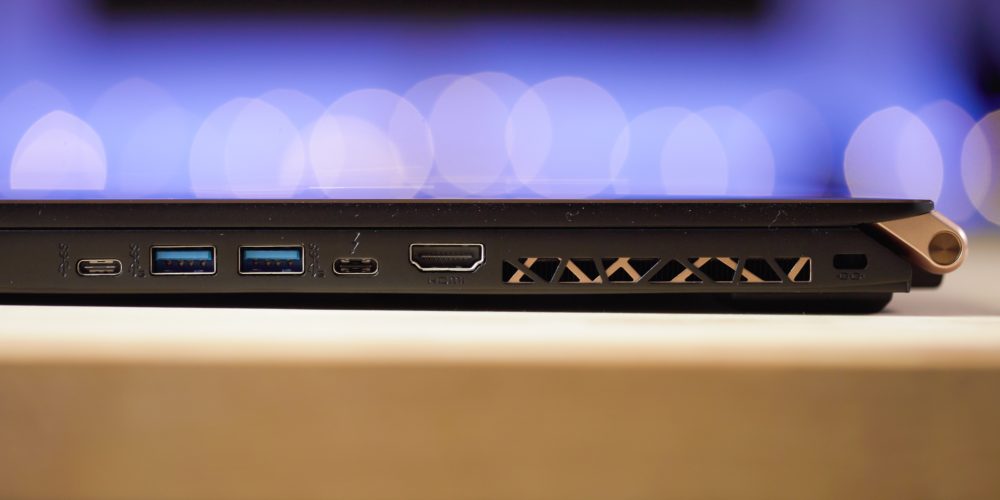 Overall the GS75 Stealth and all of its performance comes in a small, lightweight package. For being a 17.3-inch gaming laptop with an RTX 2080, it feels very portable.

My daily driver is a MacBook Pro, and that trackpad is pretty hard to beat in my book. I find a lot of PC trackpads to be touchy and require extra care to operate. That being said, I think the trackpad on the GS75 operates as expected. Multi-touch gestures are easy enough to use and tracking goes all the way to the edge of the input pad.

While the GS75 Stealth has a nice sleek design, I’m not sure why they chose this particular font for the keyboard. It doesn’t quite match the elegant look of the rest of the laptop. The keyboard does have a nice feel to it, however. I had no issues typing or gaming on the GS75 and the per-key RGB is a nice addition. 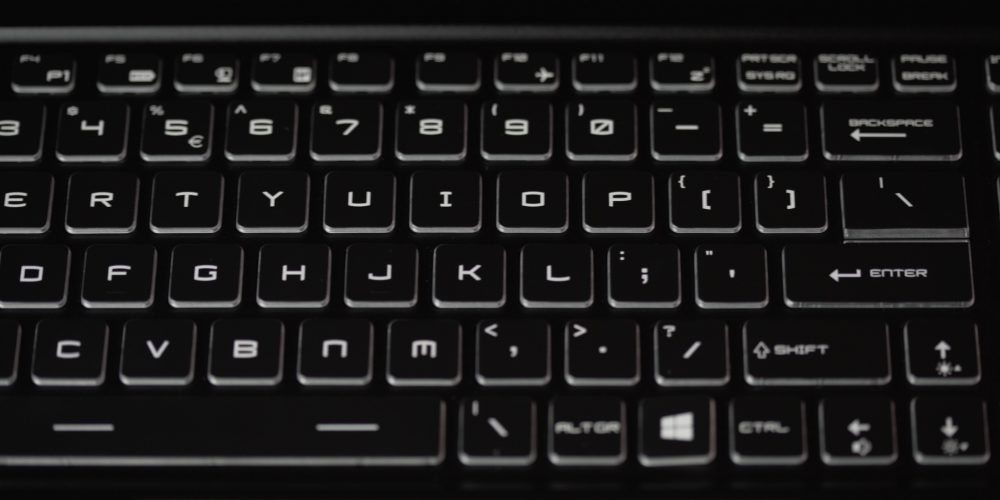 Being the top of the line in the GS series, specs on the GS75 Stealth are pretty impressive. With the six-core 8th gen Intel i7 8750H processor, 16GB DDR4 memory, and a RTX 2080 Max Q on this 8SG package, it should be able to run just about anything. Memory is upgradable up to 32GB.

The hard drive is pretty small at 256GB, but the GS75 stealth has tthree M.2 slots available to add to more storage when needed. 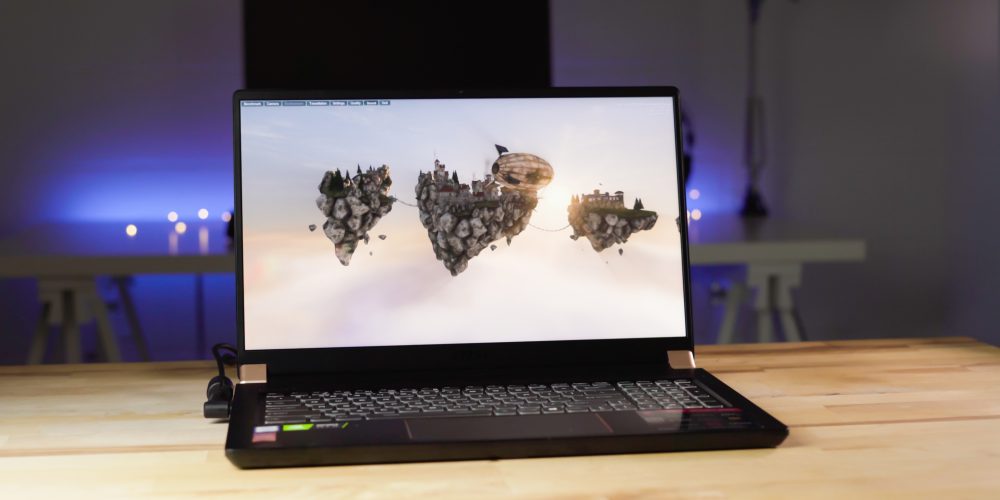 I ran the Heaven benchmark at 1080p and on ultra settings. It seemed to hang around 85-90 frames per second most of the time. Occasionally it dipped to 60FPS.

Through the MSI Dragon Center, you can switch the GS75 into different performance modes using their shift feature. You can also change these modes with a keyboard shortcut: Fn-F7. Sport mode gives you full use of the CPU and GPU in factory settings. Comfort and Eco modes throttle back the CPU and GPU to enhance battery life. MSI also advertises a turbo mode where the user can experiment with overclocking, but I didn’t see that option inside of the Dragon Center. 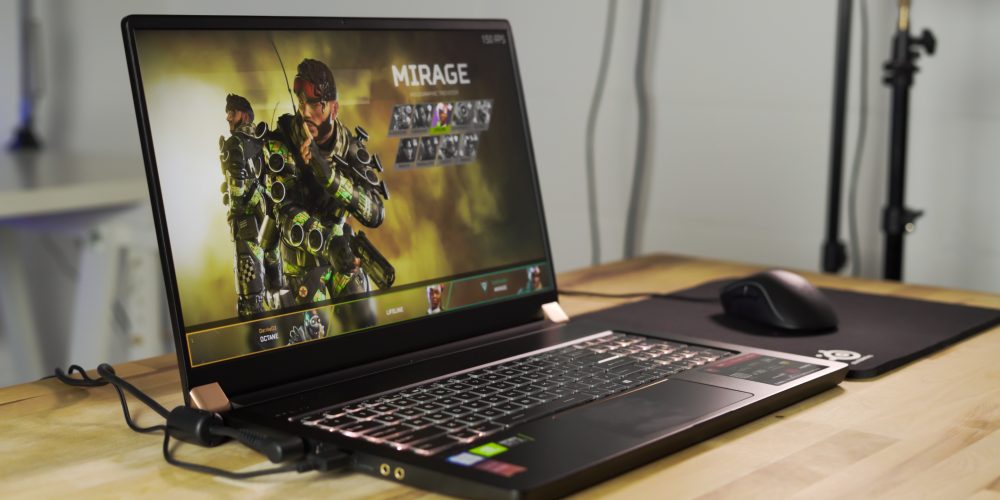 Of course, to test out gaming on the GS75 Stealth, I played some Apex Legends. With everything pretty much maxed out, I was able to sustain at least 60fps when dropping in and then closer to 80-90FPS on the ground. I never felt like it was struggling with frames, and the 17.3-inch 1080p 144hz IPS display looked and performed well.

During my testing, I noticed that the keyboard does gets warm, but was always comfortable. Near the top where the speakers are gets warmer but is still cool enough to touch. The underside of laptop got uncomfortably hot while gaming on a table. The fans weren’t obnoxiously loud, though. They were relatively quiet for what the computer was doing.

Competition in small gaming laptops with the powerful new Nvidia RTX graphics cards is growing. Check out our recent look at the Razer Blade 15 Advanced for another option. To get a RTX 2080 in the 15.6in Blade though, it will cost you $2,999. The MSI GS75 Stealth’s sleek design, great specs and small footprint make it a worthy option for a gaming laptop that looks just as good in an office. There are some fit and finish things that I would like to see improved, but for a 17.3″ gaming laptop with this hardware and a $2,799 price point, it’s worth a close look.