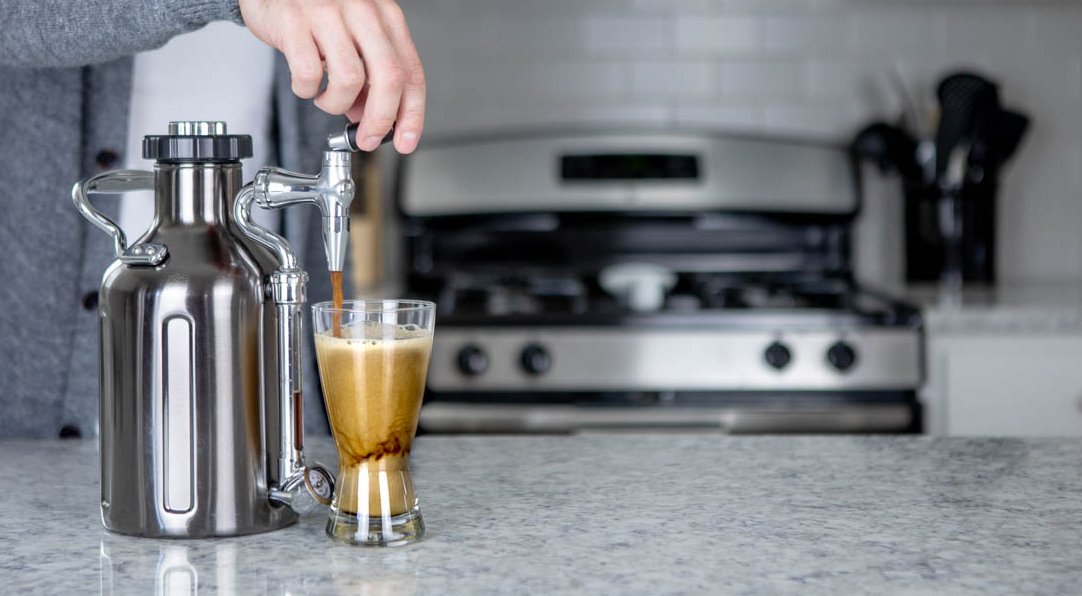 After solidifying itself as “makers of the world’s #1 growler“, GrowlerWerks is back at it again with the uKeg Nitro Cold Brew Coffee Maker. The new contraption aims to let coffee lovers create their own high-end nitro-infused cold brews, without needing to venture out or spend much money making it.

Not only is uKeg Nitro capable of making nitro cold brew coffee, its design looks flat-cool to boot. This is because GrowlerWerks has shared its slick growler design with uKeg Nitro. Outfitted with vacuum insulated stainless steel, GrowlerWerks’ new release is an all-in-one brewing solution that can keep coffee cold for an entire day.

uKeg Nitro: Nitro-infused cold brew at a fraction of the cost

Coming in an all-in-one package with a sleek design, uKeg Nitro takes aim at coffee shops by delivering nitro-infused cold brews at a fraction of the cost. GrowlerWerks estimates that consumers typically spend between $4-6 per pint, and that uKey Nitro can cut the cost down to as little as $1.50.

Additionally, uKeg Nitro can do it all from home, with fresh batches being ready to drink within 12-24 hours. Simply lift the tap for a ‘cascading pour’ similar to what you’d see at expensive coffee shops. A pressurized design keeps coffee cold all day and fresh for up to two weeks.

“Coffee drinkers are very ritualistic, and many prefer to enjoy their morning pick-me-up at home”, said GrowlerWerks founder and President, Shawn Huff. “We knew we could take our combined 47 years of engineering and product design experience to give people the complete nitro cold brew experience without having to leave the house.”

GrowlerWerks uKeg Nitro launched on Kickstarter about a month ago with its funding goal set at $75,000. Unsurprisingly it smashed through this goal five times over sitting at nearly $420,000 with ten days still remaining. Interested parties can order uKeg Nitro for a pledge of $159 and GrowlerWerks anticipates a deliveries to make it to backers sometime between October and November. If you’d rather play it safe and order it via retail, GrowlerWerks plans to have it ready ‘for the 2019 holiday gift-giving season’.

Truth be told, I’ve spent much of my life not enjoying coffee. Cold brew is actually what got me hooked a few years back and eventually converted me into a routine coffee drinker. Most days I end drinking hot coffee, but arguably the largest reason is sheer convenience.

With loads of cold brew makers out there, none can really compare to uKeg Nitro. The fact that it can easily brew, store, and pour nitro-infused cold brew, is making me consider a switch. On top of that, uKeg Nitro is a neat-looking stainless steel product, which I am always a sucker for.