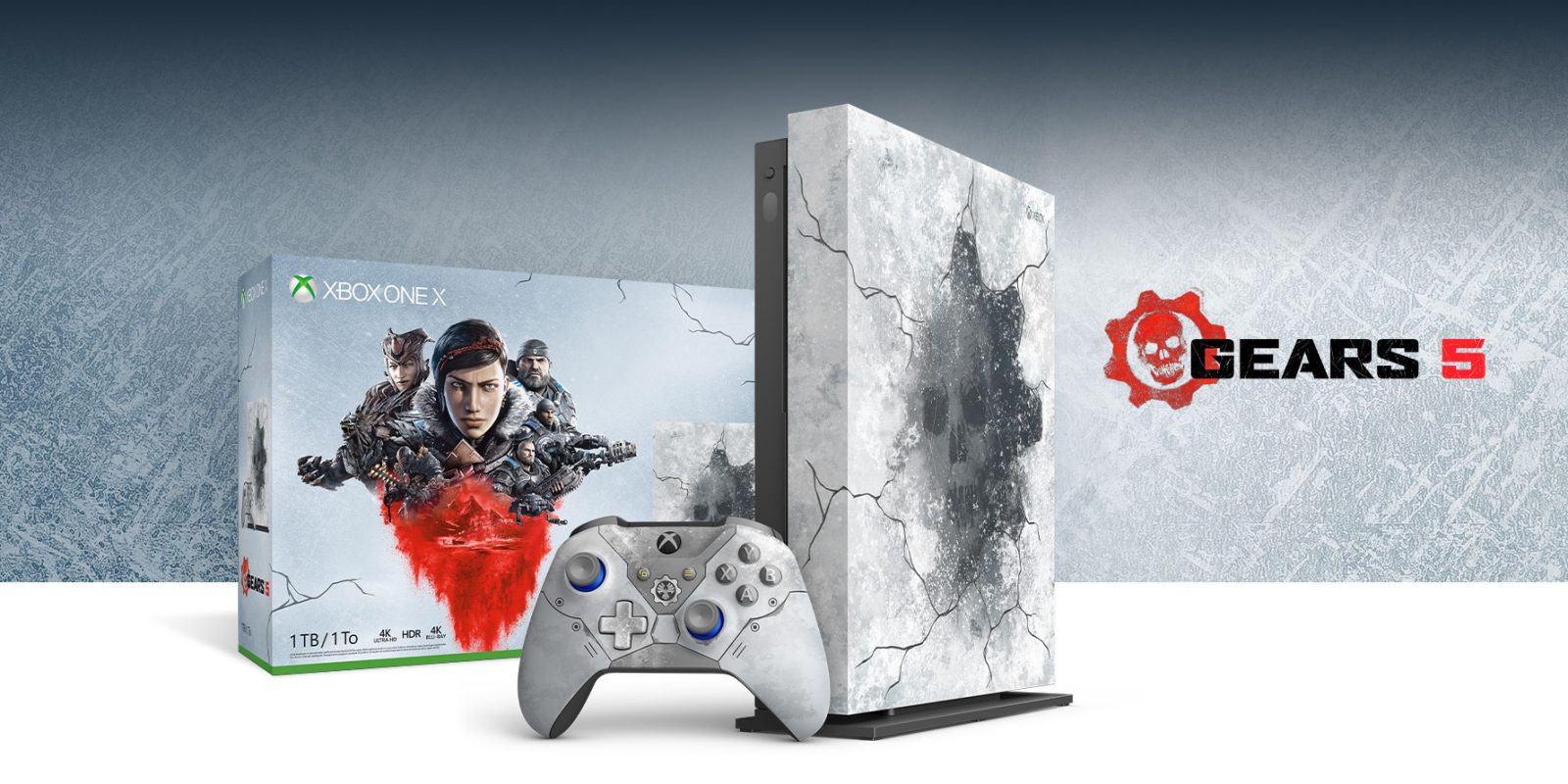 Just over a month out from release, Microsoft just a unveiled a brand new Gears 5 Xbox One X bundle. This is a new limited edition configuration with a custom design to celebrate the anticipated release of Gears 5 in mid September. And pre-orders are kicking off today. Head below for all the details.

Not to be confused with the standard and already available options, the new Gears 5 Xbox One X bundle features an impressive looking custom design alongside a new icy Microsoft wireless gamepad. This is the “first Limited Edition Xbox One X since the Project Scorpio Edition”, according to Microsoft. Designed by the developers of Gears 5 at The Coalition alongside the Xbox Industrial Design Team, the console itself has a “never-before-seen” dark translucent housing. It also has laser-etched cracks featuring the Omen partially covered in snow and ice. The snow drifts carry around the backside of the machine where you’ll find a golden Locust symbol.

The new Gears 5 Xbox One X bundle also includes the Gears 5 Kait Diaz Limited Edition Xbox Wireless Controller. Alongside the subtle gold and blue accents under the thumbsticks, the controller also sports an icy look with a snow-weathered design and rubberized diamond grips to capture the “look and feel of classic COG gear”. The controller will also be available separately from the console on September 10th at $74.99 (Pre-orders live now).

Much the like the standard edition Gears bundles, the new limited edition variant will also include full game downloads for Gears of War Ultimate Edition, Gears of War 2, Gears of War 3, and Gears of War 4. On top of the usual 1-month memberships to Xbox Game Pass and Xbox Live Gold, you’ll also get some nice in-game goodies by way of Ice Kait and Ice Jack Character Skins.

Outside of the limited edition Gears 5 Xbox One X configuration, Microsoft is also teaming up with Seagate, Razer and others on Gears 5-themed gear. That includes hard drives, mouse/keyboard combos for Xbox and PC, as well headsets and more.

Gears 5 releases on September 10th and is now available for $50 (Reg. $60) at Amazon. The LE console bundle will release on the same day and pre-orders are already live at Microsoft and GameStop for $500.

While I’ve never really personally been a huge fan of these limited edition consoles, this one looks pretty wild. They always just seem like the same old gear with a fresh coat of paint, and while this one isn’t much different, at least it’s not a solid color with a little gold piece on it somewhere like many of these alternative configurations. The new Gears 5 Xbox One X design isn’t going to be for everyone, but it does appear there has been some serious effort put in to making this one standout from the crowd. And that it certainly does.