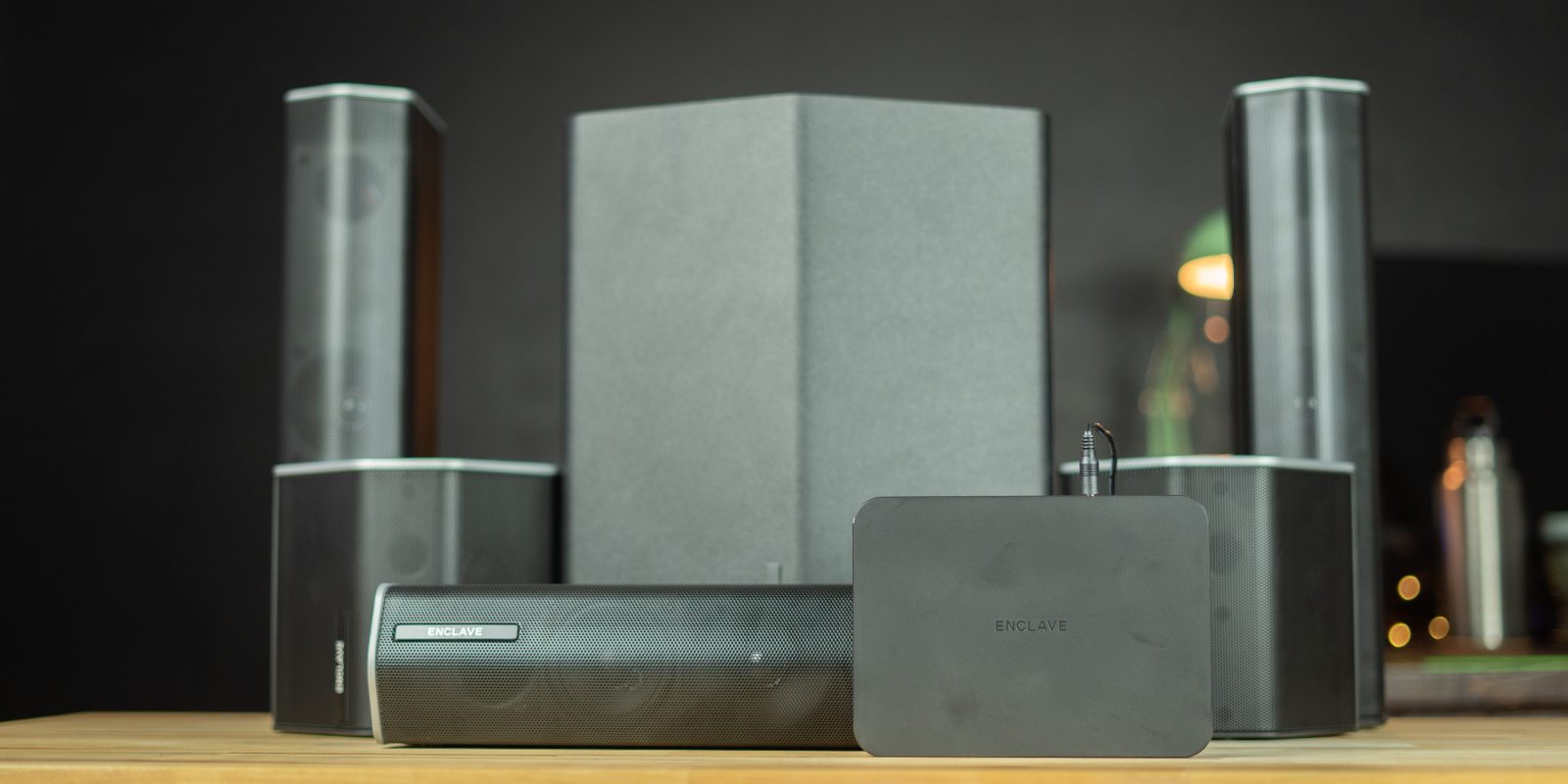 Surround sound speaker setups always seem like a good idea, but depending on how a room is laid out, it can be difficult to route cables and get everything set up in a tidy fashion. Enclave Audio is making that much easier though with their wireless surround sound systems that only need one cable and no speaker wires to get everything operational. Today we’re taking a look a the Enclave CineHome II 5.1 surround sound system. Head below to watch the video and see it in action.

Coming in at $1,099.98, the CineHome II is the entry point for systems from Encalve Audio. If you really want to take it to the next level, the also offer the CineHome PRO which is THX certified for $1,599.98.

With the CineHome II, you get Enclave’s CineHub, which controls everything, and six speakers. Two vertical towers and a center channel that lays on its side to take care of audio from the front, while two satellite speakers fill the room with surround sound. For low-end, the subwoofer houses a downward-firing 8-inch driver.

Each speaker is self-powered, so they do all need to be plugged into power. So with the CineHub, that’s 7 separate devices that will need outlets. But, that saves you from having to run speaker wire to each individual speaker. 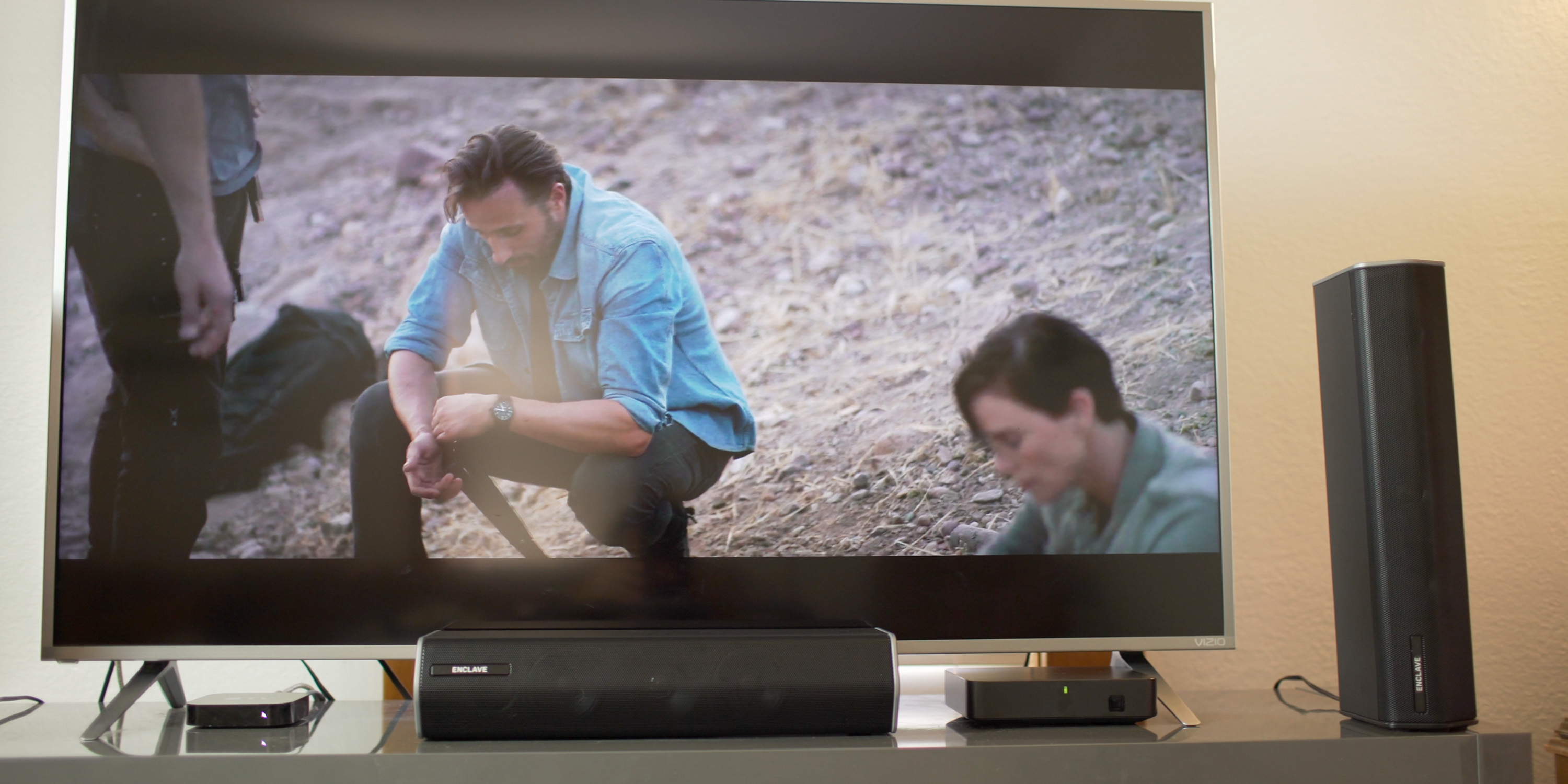 Getting the CineHome II set up is extremely fast and easy. Each speaker comes labeled with its correct position, so just place them around your space as the labels instruct, plug everything into power, and then power on the CineHub. The hub will automatically detect all of the speakers in its system and configure them accordingly. You do also want to download the Enclave Audio CineHub Remote app (iOS/Android). A note here, there is another Encalve app called Enclave Audio which will not control your hub, so make sure to download the right one.

When using the Enclave system with a TV, the best connection will be the HDMI eARC/ARC. This works with compatible TVs to make it easy to control audio levels. You can also use optical, 3.5mm AUX and Bluetooth 5.0. So, if you just want to play some music from your phone, you can easily connect via Bluetooth.

Enclave is using WiSA or Wireless Speaker & Audio to transmit the signal. This certification ensures that the signal sent to the speakers is high quality, 24bits at 48kHz/96kHz, which is twice the quality of CD audio, nearly zero latency, and that the speakers are always in sync with each other. The system will also automatically recognize audio configurations from 2.0 to 5.1 and set itself up accordingly. If you want to expand upon the system, that’s easy as well and the CineHub will automatically recognize and configure up to four subwoofers. 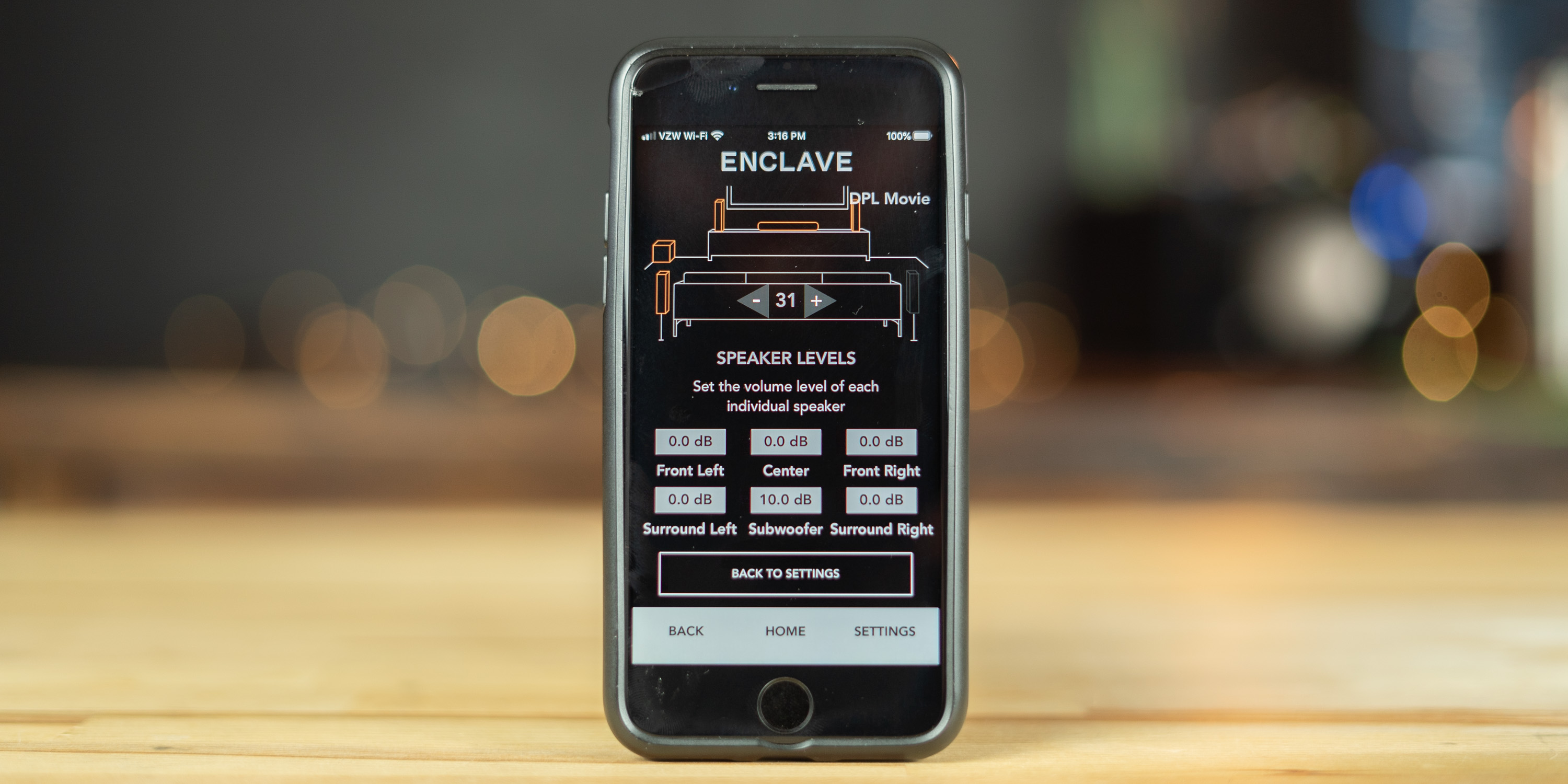 Since everything is wireless, Enclave has also built an app to control settings, sound, and volume. While it doesn’t have the most modern design, it functions well and is easy to make any tweaks to the speakers. Inside the app, it’s simple to set the distance of speakers and either boost or cut individual levels from each one to get it sounding how you like. 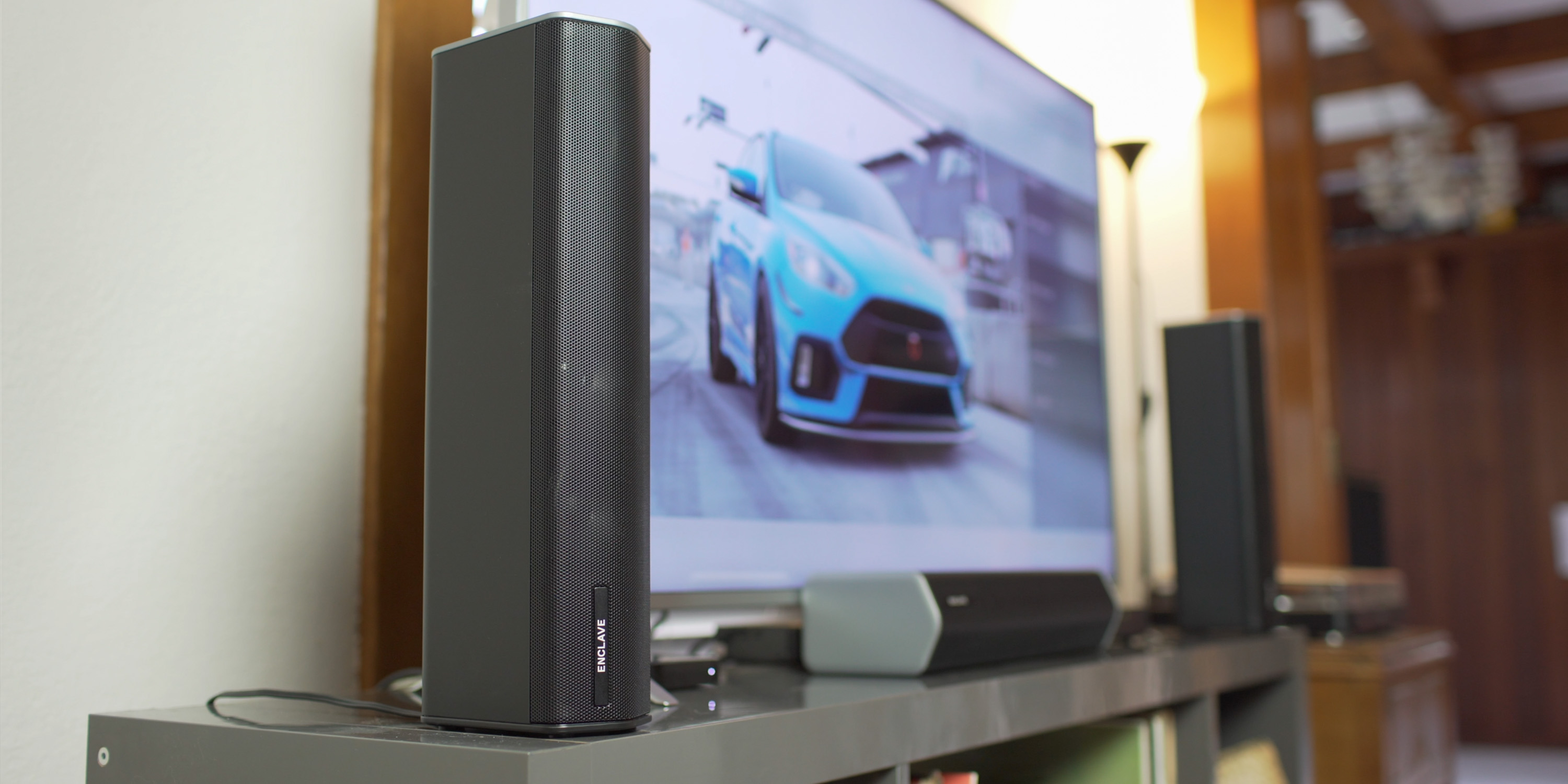 How does it sound?

Once everything is set up, the system sounds great. The sound is dynamic, gets low with the subwoofer, and is crisp and clear in the mids and highs. The surround sound system makes any movie, game, or music more immersive. Playing Forza on my Xbox One gave some fun sounds all around while racing, and watching The Old Guard on Netflix had plenty of incredible sound design that came through on the 5.1 system.

My only complaint is that while the subwoofer can be turned to +/-10dB, I’d love to be able to boost it more. I currently have it at the front of my carpeted room, though, and the cool thing about the Enclave setup is that you can move the subwoofer anywhere and not have to worry about cables. It’s pretty slick. And you can also just add another subwoofer if you really need more low-end. 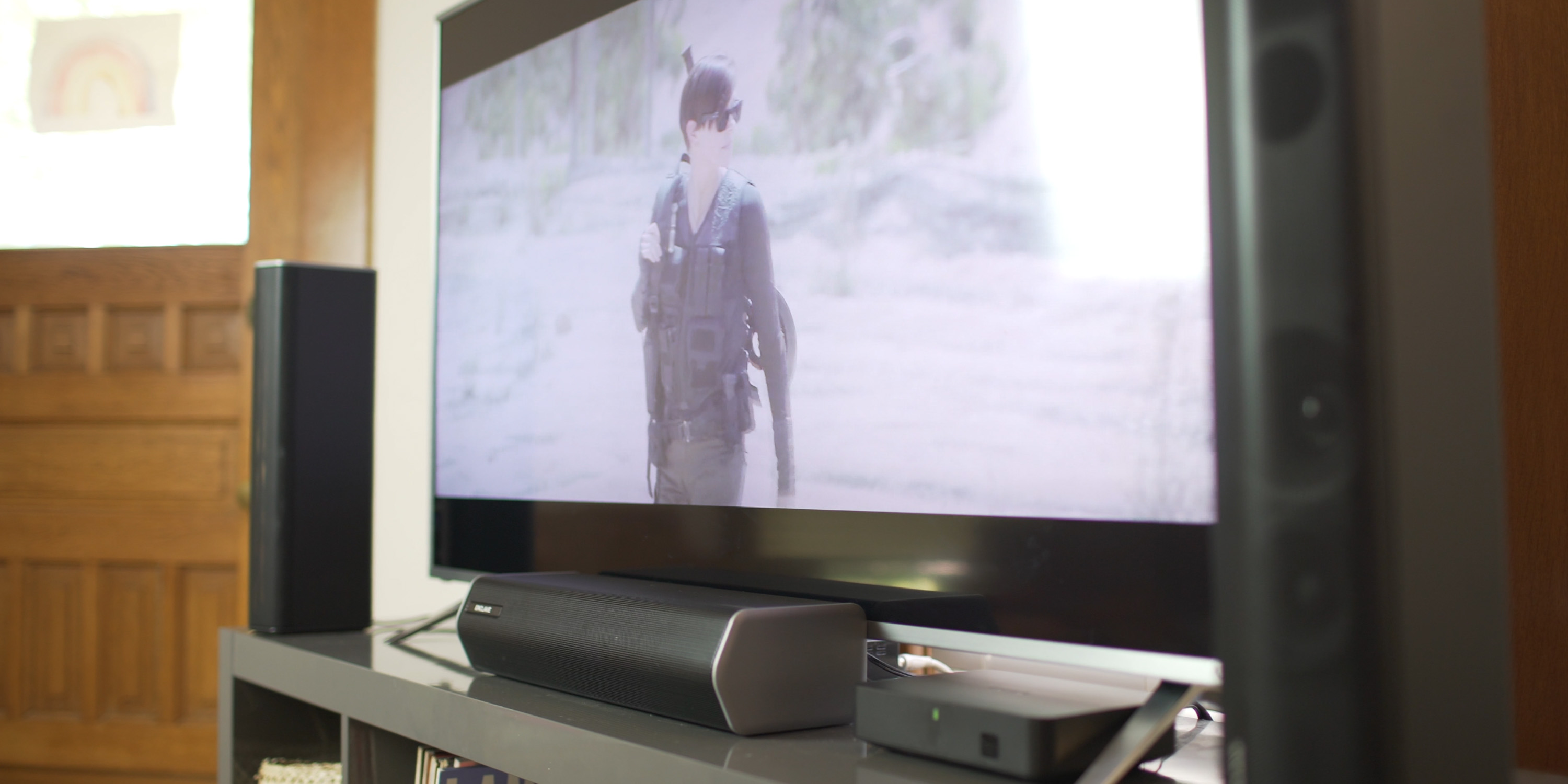 Overall, the Enclave CineHome II makes getting a great sounding 5.1 surround sound system set up incredibly easy. I’d be interested in hearing the difference with the THX-certified CineHome Pro, but I’m very impressed so far with the CineHome II. It’s a great choice for rooms where running speaker wire would be hard, or anywhere that might have a temporary set up.

If you already have speaker wires run and a capable receiver, the Focal Sib Evo Dolby Atmos is a great sounding 5.1.2 system. Check out our hands-on review to see that in action.