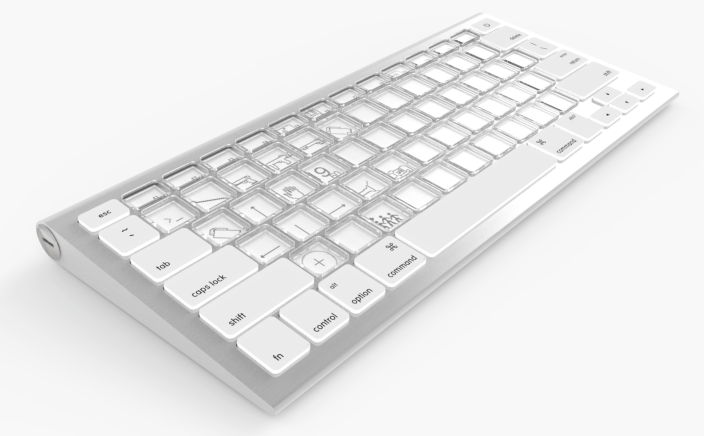 For many, the typical Apple keyboard, or something from a company like Logitech is more than enough for their daily needs. But for video editors, music programmers, serious gamers and those looking to type in different languages/dialects, customized keyboards can be very helpful. There are already a number of options for these folks, including Logic Pro X/Final Cut Pro keyboards with the quick commands printed directly on the keys, or even this super-customizable $1,500 typer, with mini LCD displays behind each key. But the new E-Ink display equipped Sonder keyboard is looking to bring an even deeper level of customization at a much more realistic price point:

The Sonder looks, for the most part, like a typical wireless Bluetooth keyboard, even matching most Macs out there. Most of its keys sport a transparent shield that showcases the E-Ink display set underneath. From there, users can completely customize each key with a particular function and iconography for whatever app they are working in. You can also set-up macro functions for keys that trigger a series of events within a certain app or game with a single key stroke.

Using what the company calls an “advanced fiber optic waveguide”, the transparent keys can also be lit up in darker situations (seen below). Sonder doesn’t use any power to display the images on each key (only when changing them), so it won’t require  much more juice than your typical keyboard. When it is time to charge, the included braided fiber cables will do the trick (also handy for completely lag-free gaming input).

Sonder will have a community cloud feature that will allow users to share layouts for “languages, dialects, macros, widgets” and more. Your various customized layouts will automatically be stored to the cloud according to the company.

It will eventually hit store shelves for $299, but you can pre-order one right now on the site for $199. Having said that, there’s no telling when this thing might ship and it sounds as though the company will be launching a Kickstarter campaign later this year with hopes of shipping internationally soon after. It is likely a smart idea to hold off until more info is available and the Kickstarter campaign is live.