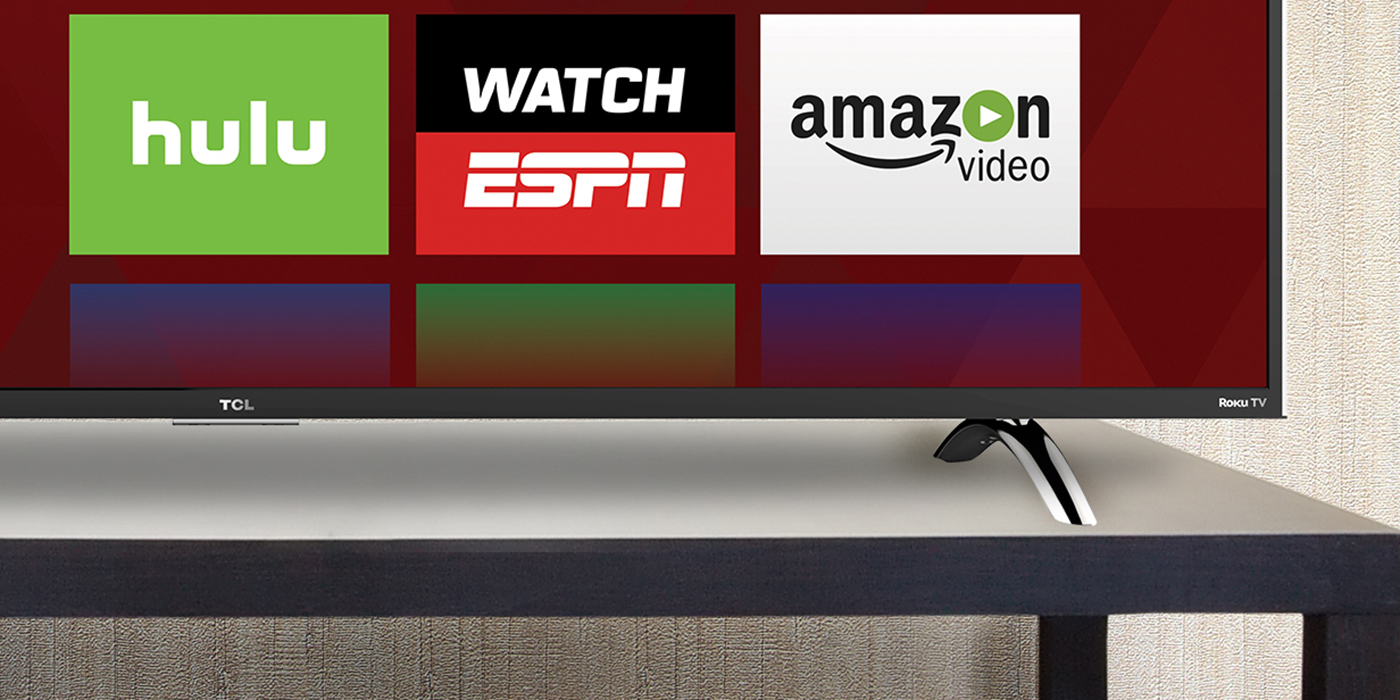 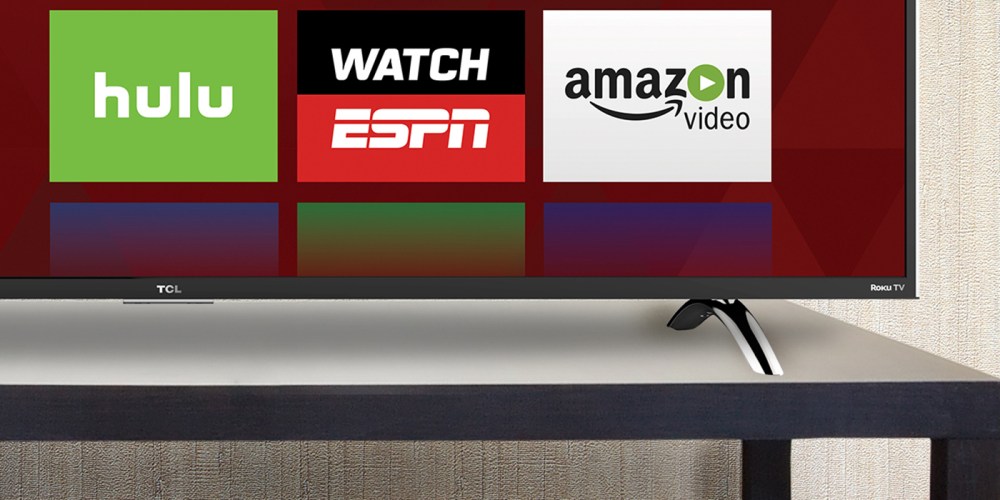 Back at CES 2016, Roku announced that it would be partnering with an expanded list of manufacturers on new 4K UHDTVs. Today, TCL has announced a new line of ultra-high resolution displays with the streaming software built-in. This new lineup includes six models ranging in size and price. With the bottom of the 4K market dropping out over the last few weeks, TCL’s pricing may raise an eyebrow for some…

TCL’s S-series will expand with two fresh models: 55-inch ($599.99) and 65-inch ($999.99), while the new P-Series starts at 43-inches ($500) and will top out at 65-inches for ($1,100). This may come as a surprise to some for two reasons. One, Roku-enabled TVs seem like a perfect secondary option for a bedroom or play area. Secondly, TCL’s brand name doesn’t carry the same weight as some other brands partnering with streaming platform (LG, Sharp, etc).

Likely the driving force behind this pricing strategy comes from the inclusion of a 4K display, which TCL uses as a justification for its markup. As we’ve seen over the last few weeks, Ultra HDTVs have dropped in price. Many of the brand names that have gone on sale are comparable to TCL in many areas. By not opting for a lower-priced 35-40-inch display, TCL may be missing a huge opportunity here. 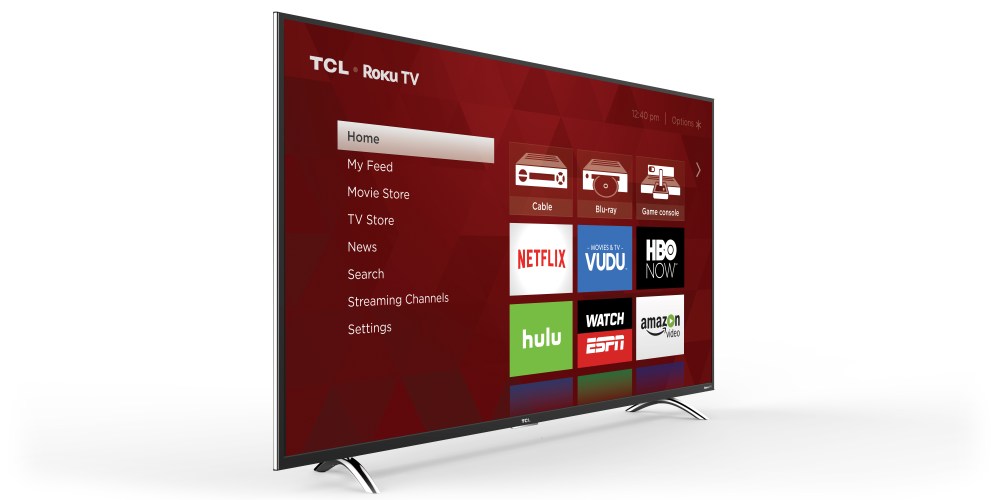 “The time is right to bring these new 4K TVs to consumers as the 4K market has matured quickly over the last year, with new standards set in place and 4K content creation increasing. TCL is thrilled to bring 4K TCL Roku TV models to consumers that incorporate one of the best combinations of picture quality, content, ease of use, and value in the market today. The 4K TCL Roku TVs will make great Ultra HD content easily accessible for all consumers.” 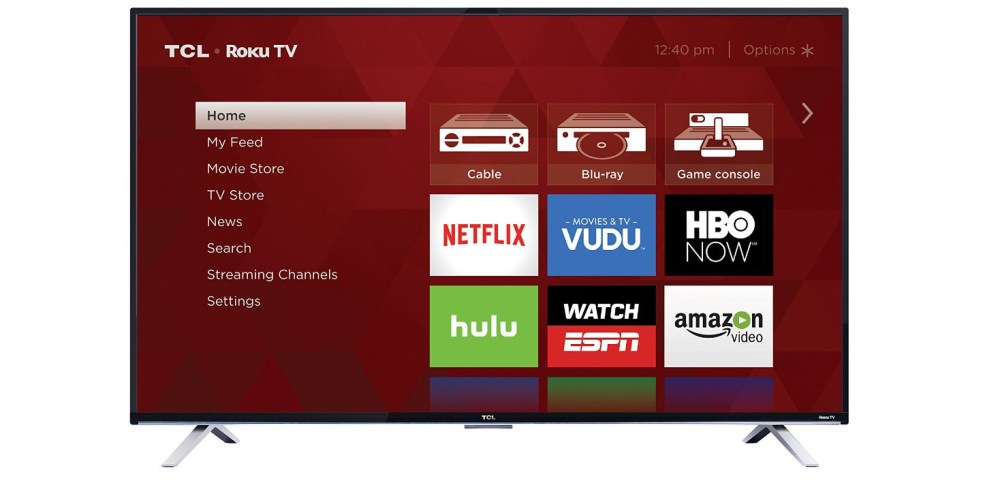 Like most other UHDTVs on the market, the P130 series has a upscaling engine for 1080p content and a more powerful quad-core processor to handle the increased workload. Additional features include dual-band Wi-Fi, ethernet connectivity and four HDMI 2.0 inputs.

Roku brings built-in access to thousands of streaming channels, including Netflix, Hulu, HBO Go, Amazon Instant Video and many more. The ability to not switch inputs and have multiple entertainment sources is nice. The question is, are consumers willing to pay over $1,000 when 4K prices are falling at steady rate from well-known names as well?

Availability on the P-Series has yet to be announced but the new additions to TCL’s existing lineup are available for pre-order today at Amazon. Alternatively, you could simply add a $40 Roku Stick to any existing TV or upgrade to the new 4K streaming box if Ultra HD content is a must-have.

CORONA, Calif.–(BUSINESS WIRE)–TCL®, the world’s third largest television manufacturer, today announced pricing and availability of its 4K Ultra HD TCL Roku TV™ models for the U.S., bringing stunning UHD 4K picture quality to its smart TVs that integrate the Roku® OS. Originally announced at the 2016 Consumer Electronics Show, the new 4K TCL Roku TV lineup will include six models that bring together the latest in TV design and technology, advanced connectivity and available 4K content to deliver on consumer demands for both the highest quality and largest selection of streaming entertainment.

“The time is right to bring these new 4K TVs to consumers as the 4K market has matured quickly over the last year, with new standards set in place and 4K content creation increasing,” said Chris Larson, vice president, sales and marketing, TCL. “TCL is thrilled to bring 4K TCL Roku TV models to consumers that incorporate one of the best combinations of picture quality, content, ease of use, and value in the market today. The 4K TCL Roku TVs will make great Ultra HD content easily accessible for all consumers.”

Discovering 4K content is fast and easy with Roku’s 4K Spotlight Channel. The channel features a curated selection of great 4K content from a variety of popular streaming channels and is updated with new content on a regular basis. A 4K UHD category is also included within the Roku Channel Store to enable consumers to access nearly a dozen streaming services that offer 4K entertainment including Amazon Video, Netflix, VUDU, YouTube, UltraFlix and more. Additional streaming services offering 4K content are expected to be added in the future.

The 4K TCL Roku TV models feature a personalized Home Screen that places streaming channels alongside consumers’ other TV entertainment choices, such as a game console, cable box or Blu-ray player. Consumers no longer have to navigate complicated menus or cycle through inputs to switch between their favorite entertainment. The new 4K TCL Roku TVs provide consumers with easy access to more than 3,000 streaming channels in the U.S. with 300,000+ movies and TV episodes.

TCL integrated the ultimate connectivity in both the UP130 and US5800 4K TCL Roku TV models, offering dual-band Wi-Fi and Ethernet for blazing fast streaming performance. Both models also include four HDMI 2.0 inputs, including the latest HDCP 2.2 standard, to easily watch Ultra HD content from the newest UHD Blu-ray players and future devices.

Other key features of the 4K TCL Roku TV models include comprehensive and unbiased Roku Search – including voice search on the enhanced Roku TV remote included with the premium P130 model. The free Roku Mobile App for iOS and Android turns a smartphone or tablet into a remote for the 4K TCL Roku TV models. The mobile app features one-touch access to key features such as Roku Search and includes a new Expert Picture Settings feature for professional TV calibration.

“TCL is a tremendous Roku TV partner and has played a significant role in the success and growth of the program over the past two years,” said Chas Smith, SVP and general manager Roku TV & Players. “We’re confident these new 4K TCL Roku TV models will build on that success and deliver an incredible 4K entertainment experience for consumers. The combination of TCL’s TV technology and the Roku OS, at this exceptional value, is hard to beat.”

The S-series 4K TCL Roku TVs are available for pre-order starting today on Amazon.com athttp://www.amazon.com/dp/B01BGC39VM, with additional national retailers launching in April. To learn more about TCL and its products, please visit www.tclusa.com.

TCL is one of the fastest growing consumer electronics and TV brands in North America. Founded in 1981, TCL (The Creative Life) established itself as a worldwide leader before recently launching in the U.S. TCL prides itself on offering customers high quality products with stylish design and the latest technology at a great value. TCL’s manufacturing expertise, vertically integrated supply chain, and state-of-the-art China Star panel factory, allows them to make large size TVs, premium design, and leading edge technology affordable for the U.S. consumer.