Despite wearing a Moto 360 with fitness tracking features for the past year, I continued to use a Fitbit on a daily basis. A fitness tracker from the San Francisco-based company has been on my body for the better part of the last four years, and in February, Fitbit announced a fashion-oriented fitness band called the Alta that particularly caught my eye. I had to give it a shot.

After just a week of usage, the $130 retail Fitbit Alta has completely replaced my full featured Android Wear device and I’ve come to realize that less is more. At least for me, the Alta has proven — and this has been echoed many times over at 9to5Google — that the fundamental features of actionable notifications and apps on a smartwatch are a convenience that can easily be lived without.

It has gotten to the point that my first instinct is to pull up my wrist when I feel any vibration from my phone. A year of wearing a full featured smartwatch has ingrained that behavior and I expect to either swipe a notification away or perform an action on a notification. But when I look at my wrist now, I just see a thin band with a narrow, vertical display. It may not be super smart, but I like this thing a lot.

It would be completely reasonable to assume that the entire 1.5-inch glossy black and slightly curved surface of the Alta is the display. However, the centered screen only measures .75-inch diagonally with the Alta’s sparse UI going right to the edge of the display. While I had no problem clearly viewing text on the screen, those with varying levels of eyesight might wish for less bezel and more display. Fitbit again uses an OLED display and while it is bright indoors — if not annoyingly so at night — it is much fainter in direct sunlight.

Along with vibrations, the Alta’s display is the only form of interaction you’ll have with this fitness tracker. Due to the lack of a touchscreen, the natural swipe is replaced by forceful taps — twice to wake and once to move to the next screen. While I prefer this to physical buttons, it takes awhile to figure out how much force should be applied. The instinctive place to tap is the screen, but Fitbit suggests tapping where the display and band meet. I have acquainted myself with touching said location, but mostly just to avoid leaving fingerprints on the glossy display.

The screen can also be activated by lifting your wrist up which bypasses the initial double tap to wake. Accuracy-wise, the gesture works a majority of the time, but it is noticeably not instantaneous. There is an approximately one second delay after your wrist is in position before the screen turns on. Over the course of the week, I’ve gotten use to expecting the slight linger.

Overall, the build quality of the Alta is solid, though there is a very tiny gap between the metal body and the display that allows for small amounts of dust to collect. A bigger gap, however, is located between the tracking module and the bands that easily allows fibers and dust to build up. While it is easily cleaned by taking the bands off, the gap can be a minor eye sore depending on how scrutinous you want to be.

The Alta has six screens that you cycle between: watchface, steps, distance, calories burned, active minutes, and your next silent alarm. While these are useful as you would expect, there’s not much about the Alta that other trackers like the Charge HR can’t provide. If you’re going with the Alta over other Fitbit offerings, the reason is likely just because you’re looking for something with a sleeker, perhaps more attractive build. In fact, compared to the Charge HR, you’re losing heart rate features.

Fortunately, Fitbit lets you reorder and remove screens using the companion app. Choosing one of the five vertical and five horizontal watchfaces will determine the orientation of the other screens. The ability to independently set the two would be a welcomed feature as my preferred vertical watchface rounds the other stats to just two digits, but that’s just a minor gripe.

Also displayed horizontally are various motivational phrases that vibrate your wrist throughout the day. These encouraging quips are not new on Fitbit devices, but they are now paired with hourly Move reminders that encourage walking 250+ steps (2-3 minutes) every hour. Having a quantifiable metric to meet makes the “feed me” and “almost there” messages less cheesy and more meaningful. It’s a feature very similar to one found on the Apple Watch and one that I’m glad Fitbit implemented. Possibly annoying to some, I’ve always wanted a fitness gadget that is very active, coach-like, and interactive. And in that regard, the Alta delivers.

One feature that does not require any user interaction is SmartTrack. The ideal smart device is one that does things automatically in the background, and this tracker recognizes over 15 minutes of running, cycling, aerobic exercises, and sports, like soccer, tennis, and basketball. With my previous tracker, I had to hold down a button or remember the precise start and end times of an activity to enter on my phone afterwards.

Like SmartTrack, the Alta also has automatic sleep tracking. The Fitbit recognizes when you’ve laid down and it will track any restless movements. As a chronically horrible sleeper, precisely knowing how many hours I’ve slept is the most compelling reason to wear something 24/7. The first thing I do now when I wake up is sync the tracker to see stats for last night’s slumber.

The three types of notification the Alta displays — phone calls, text messages, calendar — always scroll horizontally. After you feel the vibration of a notification, users have seconds to activate the display to see the message. Having your notifications remain on the Alta, even if it means it won’t be current, until you glance at your wrist would be preferred to having it disappear after a few seconds in my opinion. But, again, this is a minor gripe as the Alta doesn’t intend to be a smartwatch.

I find phone call notifications a strange addition as my instinct would always be to grab a ringing phone and see who’s calling. Having phone call notifications on this Fitbit, just as with an Android Wear watch without speaker hardware, doesn’t make much sense in my opinion. If we’re restricted to only a few kinds of notifications, I would have much preferred email notifications that show the sender and subject line. I think, though, that most people will be content with what the Alta provides.

While the Alta can show the day’s aggregate stats, users have to sync with the companion iOS, Android, and Windows Phone in order to see the full details of what they got out of their workout. The Fitbit app is simple with the main view showing a summary of how many steps were taken, calories burned, distance traveled, etc. Tapping into any of the stats will show the day’s progress in a graph, as well as past history with weekly averages. 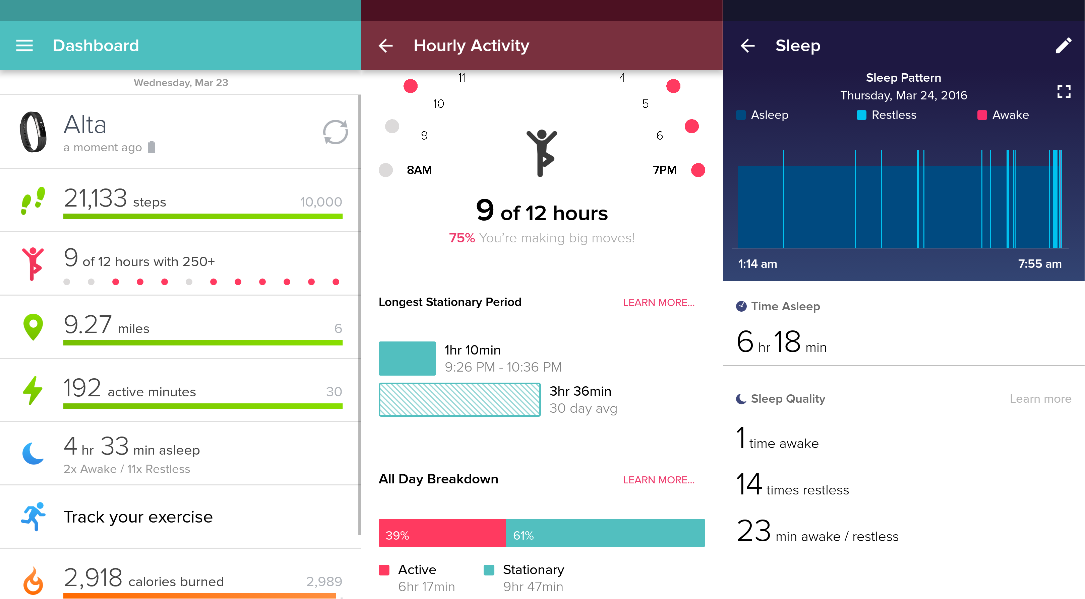 In the app, users can adjust goals, set silent vibrating alarms, adjust device settings, and set-up notifications. On Android, users can pick which phone, SMS, or calendar app sends notifications to the Alta. On iOS, it sticks to the system defaults.

The biggest benefit to using a dedicated fitness device over a smartwatch is battery life. Multi-day battery means you can wear the device to bed without worrying if it will be ready for the next day. While Fitbit touts five days of battery life for the Alta, I have made it past that before receiving a low-battery alert, designed to remind you to charge within 24 hours. Others will likely be able to get longer battery life without phone notifications turned on.

As you can see below, the Alta uses a proprietary charger that clips to the tracker. The USB end of the cable has a button to show the battery status when charging and is used to reset the tracker — a weird compromise of having no buttons on the tracker itself. 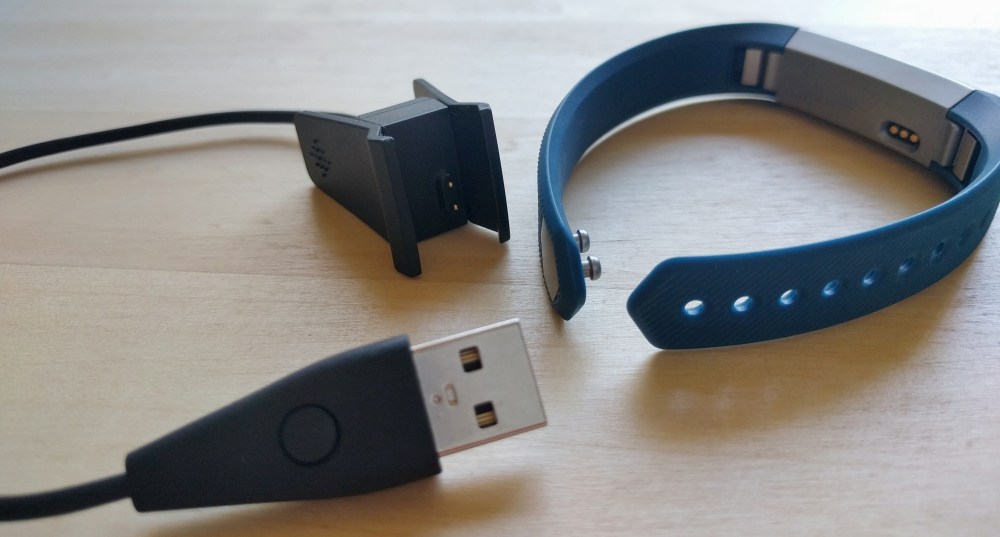 The Alta is designed from the ground up to be fashion oriented. All the tracking smarts of the Alta reside in a 1.3-inch long module that has the same width and thickness of the popular Fitbit Flex. The wristbands are swappable and the company sells a pink or graphite leather band for $60 and a sleek looking, but expensive $100 metal bangle. The company is also partnering with fashion brands Tory Burch and Public School to make more stylish designs.

Out of the box, it comes with a black, blue, plum, or teal band that is made of rubber and similar to the one on the Charge. There is a textured pattern on the outside while the interior is smooth and closes with a simple clasp. At first it is hard to close, but overtime the stiff rubber wears out and it becomes much easier to put on. In my experience this band is comfortable and I’ve had no problem wearing it throughout the day and during sleep.

For those who want to track their fitness, wearing something everyday is a non-issue. In this case, the Alta’s sleek design that doubles as jewelry with the right band is a nice bonus. For those who do not see the need of getting notifications on their wrist, a fitness tracker is a nice compromise, if not a Trojan Horse to smartwatches.

Fitbit is likely the most trusted brand in the fitness tracker space. They have solid hardware as well as a comparable software suite that is simple for the average user, but detailed enough for those who want more information. The Alta continues in that lineage, while looking good and adding automated features that make fitness tracking as easy as putting on a band.