Attn Trekkies: Get the ‘Building Star Trek’ Documentary in HD for free (Reg. $3)

Google Play is offering the documentary Building Star Trek for free to help celebrate 50 years since the airing of the original series. Regularly $2.99, this documentary goes in-depth into the world of Star Trek and what it took to produce the series. The special originally aired September 4th on the Smithsonian Channel and focuses not only on the props used for the show, but the technology Star Trek inspired that we use today. (Think iPads, laser applications and phasers.)

When “Star Trek” first aired in 1966, it expanded the imagination of viewers about what was possible in our lifetime. Today, many of the space-age technologies displayed on the show, like space shuttles, cell phones, and desktop computers, have already gone from science fiction to science fact. Other innovations, like warp drive, teleportation, and medical tricorders are actively in development. Join us as we celebrate the 50th Anniversary of “Star Trek” – a show that continues to inform, enrich, and inspire. 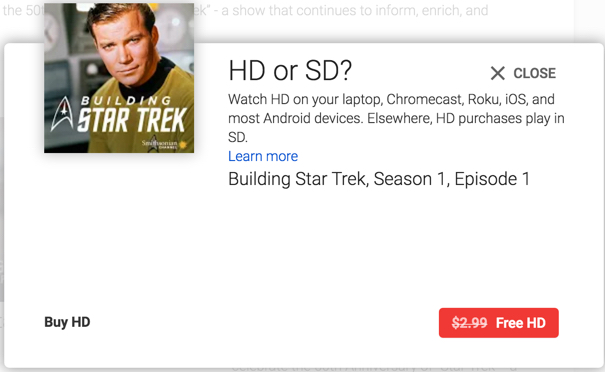