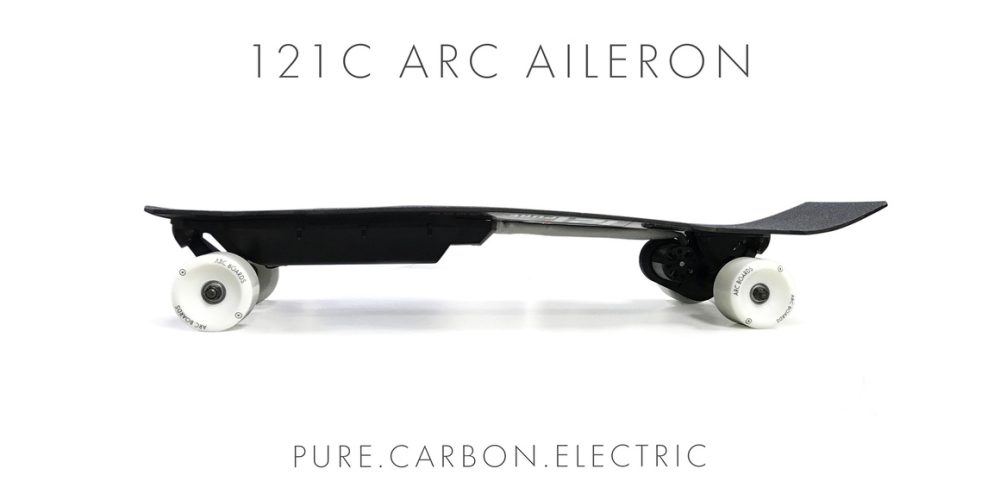 Earlier this week, we told you about the electric Bajaboard and just yesterday we noted UrbanX that turns any bicycle into an eBike. Moving to today, it’s time to dive into the 121C Arc Aileron, the “world’s first” pure carbon electric skateboard. With its sleek looks, you wouldn’t be hard-pressed to imagine Jony Ive giving a 30-second spiel about its thin frame. An internal 133WH lithium ion battery supplies 11 miles of range at top speeds of 22mph. It’s also water-resistant and can support inclines up to 22%.

What really makes this electric skateboard standout from the competition is its carbon fiber build. Arc states that it’s the first of its kind, but regardless, its gorgeous. While the frame may be light weight, it does raise some questions about durability. Skateboards are known to taking a beating and that would be a potential concern of mine here but you’re probably not grinding down many rails. The choice to go with a carbon fiber frame puts the total weight under 10-pounds, which is around 33% less than comparable models. Much like the Bajaboard, this electric skateboard is also controlled with a handheld wireless remote that looks a lot like a Wii nunchuck. Currently a pledge of around $900 will deliver a unit in June if all goes to plan.

We started our journey as three middle-aged guys looking for a last mile solution. We started working on the original Arc Board in 2014 and we had a super awesome Kickstarter campaign in 2016 to bring the Arc Board into production. We have since started production of Arc Boards and are fulfilling orders locally in Singapore. Slowly but surely, we began to build a community of Arc Boarders that meet regularly for rides and to just have fun together. As we started fulfilling Arc Board deliveries, we have witnessed first-hand Arc Boarders use their boards as a fresh new means of getting around. This affirmed our vision on changing the way people move.