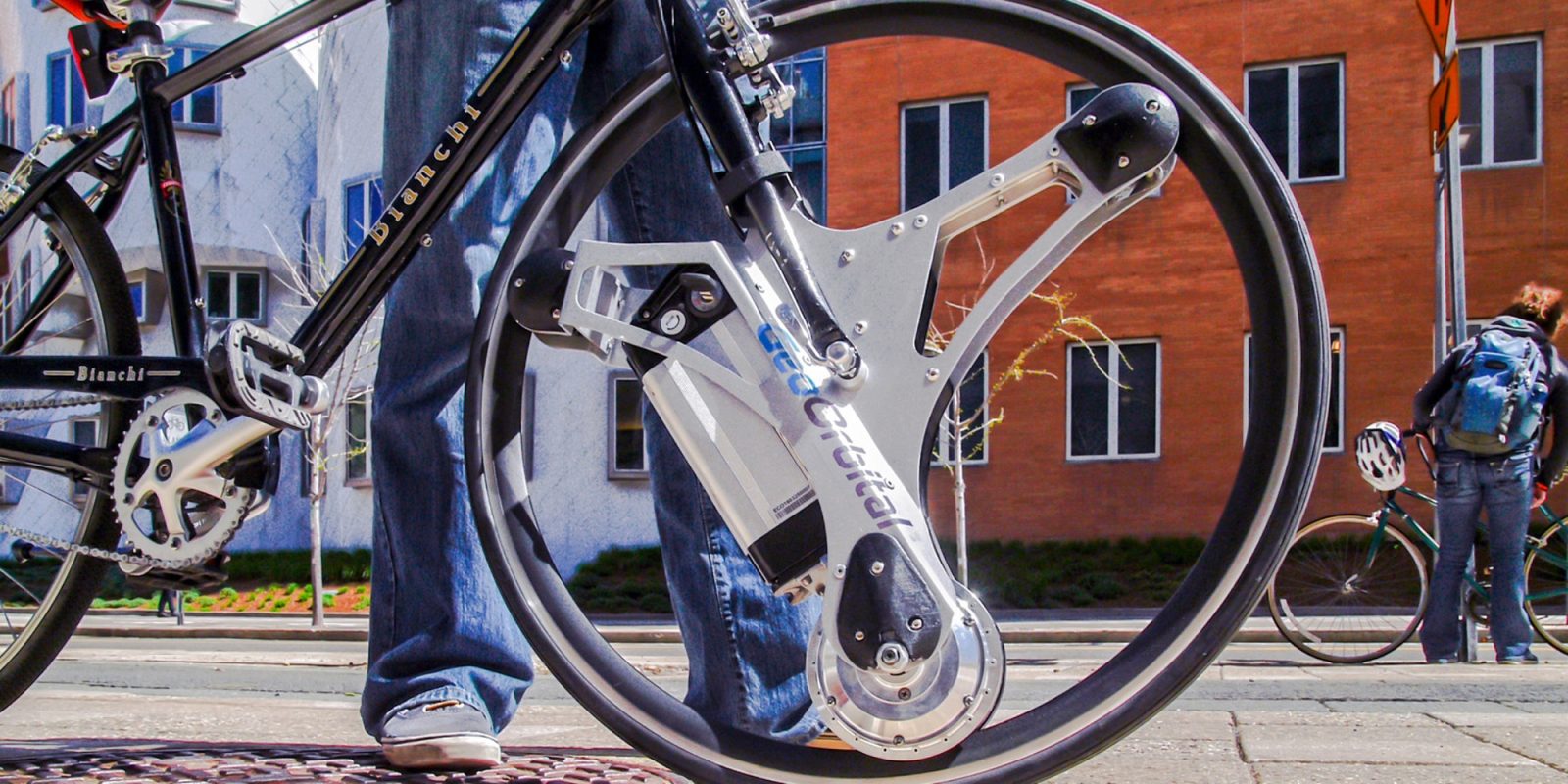 The GeoOrbital Wheel was designed to transform practically any existing bicycle into a eBike. The best part? It takes under 60 seconds, meaning in less than a minute you can go from a classic pedal-powered bicycle to a full-fledged eBike sporting a top speed of 20mph.

If the name wasn’t enough to give it away, the GeoOrbital Wheel packs the essential features of a typical eBike into the confines of well, a wheel. Housed within the under 20-lb package are a 36V battery and a 500W motor. This setup is then accompanied by a thumb-activated throttle which clips to the ride’s handlebars for speed control. The wheel is said to be capable of a maximum 50-mile range on a single charge.

Unlike other approaches to modular wheel-based eBike systems, the GeoOrbital Wheel adopts a more unique design. Rather than tacking on a motor to a standard bike wheel, it utilizes an adaptation of a Centreless wheel. So instead of the entire wheel spinning around an axis, the rim rotates around a fixed core.

This uncommon design of the GeoOrbital Wheel definitely carries a Tron-like aesthetic with it, but the wheel’s form-factor also comes with some practical benefits. Thanks to using “the latest hi-density foam technology” the tires are said to be flat-proof, meaning you’ll apparently never have to worry about a flat or under-pressured tire again.

The wheel’s design was also engineered with a low and centralized weight distribution to help achieve a more smooth and natural ride. The GeoOrbital Wheel is also completely water-resistant, so whether you need to traverse through heavy rain or snow, there shouldn’t be any issues.

It’s available in two different models which are said to work with practically any size bike. The specs for both the 26 and 28-inch models are pretty similar, aside from the smaller model sporting a 6Ah battery and the larger version equipped with up to 10Ah of power.

The GeoOrbital Wheel will run you just under $1,000 and can be purchased directly from the company’s site. You’ll be able to choose between not only the two size variants, but also between Boston Silver and Bounce Black colorways. The wheel looks to be shipping later this year, but there is no specified date.

Make pedaling your regular bike optional by upgrading your regular front wheel to a GeoOrbital wheel. The wheel is made to last – made in the USA (form domestic and imported parts) with aerospace-grade aluminum, hi-quality Panasonic battery cells and a solid foam tire that will never go flat. There is no need to install or configure any apps – simply clip on the throttle and use it like a gas pedal – the harder you press the faster you go. The 500W motor puts out TWICE the power of an Olympic cyclist.