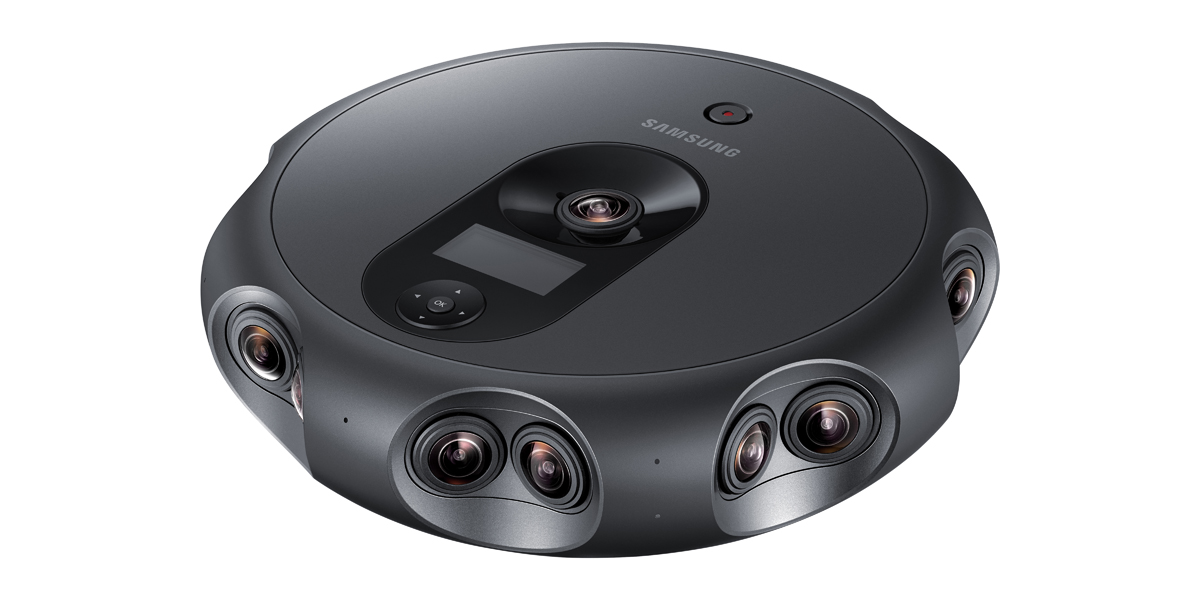 Samsung has made a number of forays into the world of virtual reality over the last few years. Its consumer-focused Gear headset has enjoyed popularity as an accessory but we’ve yet to see a real professional-grade device. Until today, that is. Samsung has officially introduced the 360 Round camera, designed to answer the call of content creators looking for an on-the-go solution.

Not only does it pack 17 different cameras, but Samsung’s newest release has a IP65 rating designed for rough and tumble use. Add in 4K capabilities along with a spatial audio system, the 360 Round has a chance to make a splash in the industry that recently saw GoPro unveil its own in-house VR setup.

The Samsung 360 Round was designed with content creation away from the studio at the forefront. A uni-body chassis is made specifically for situations where weather may be an issue. Taking a page out of flash storage, it also has minimal moving parts including a fanless design that cuts down on noise during filming.

Six internal microphones, along with support for an additional two external, allows the 360 Round to capture spatial audio that adds to a true virtual reality experience. Essentially, movements made by a user will cause sound to adjust in real-time, just like moving through any space would.

“The Samsung 360 Round is a testament to our leadership in the VR market. We have developed a product that contains innovative VR features, allowing video producers and broadcast professionals to easily produce high quality 3D content,” said Suk-Jea Hahn, EVP of Samsung’s Global Mobile Team. “The combination of livestreaming capabilities, IP65 water and dust resistance and 17 lenses makes this camera ideal for a broad range of use cases our customers want—from livestreaming major events to filming at training facilities across various industries.”

Samsung’s new camera can stream 3D content at 4096 x 2048 30fps, and record at the same specs. There’s an internal 40GB worth of storage with support for 256GB SD cards or an impressive 2TB worth of SSD add-ons.

We’ve yet to catch wind of the official price tag on Samsung’s latest release, but it’s expected to hit US shelves sometime this month. More details should be available in the coming weeks.

In the meantime, be sure to check out GoPro’s new Fusion VR camera that’s slated to ship in December. Priced at $700, it has all of the familiar features the brand is known for in a consumer-friendly package. Learn more in our announcement coverage.

Experience Samsung 360 Round, a High-Quality Camera for Creating and Livestreaming 3D Content for Virtual Reality (VR)

The 360 Round’s durable, compact design features IP651 water and dust resistance for use in everyday weather conditions and a fanless design to reduce weight and eliminate background noise. With additional features, including PC software for controlling and stitching and expandable external storage2, the 360 Round provides long lasting shooting for any sized job.

The growth of 360 content platforms, such as Samsung VR, Facebook and YouTube, as well as the spread of 360 videos through major media, has increased the need for high-quality 360 videos among VR professionals and enthusiasts. The 360 Round is the first product to meet these needs by combining high-quality, 360-degree imagery with advanced 3D depth at a reasonable price compared to other professional 360 cameras.

“The Samsung 360 Round is a testament to our leadership in the VR market. We have developed a product that contains innovative VR features, allowing video producers and broadcast professionals to easily produce high quality 3D content,” said Suk-Jea Hahn, Executive Vice President of Samsung Electronics’ Global Mobile B2B Team. “The combination of livestreaming capabilities, IP65 water and dust resistance and 17 lenses makes this camera ideal for a broad range of use cases our customers want—from livestreaming major events to filming at training facilities across various industries.”

The Samsung 360 Round combines high-quality images with a durable design and a content management software solution that allows VR directors to transform virtual reality through a complete set of advanced features.

High-Quality 360 Content The 360 Round offers high-quality 3D images with a 4K camera, thanks to 17 paired lenses that capture a 360-degree view for a full 3D experience. In addition, the 360 Round enables live streaming with little-to-no latency3 and broadcasts easier than ever, with one-step stitching and control software provided by Samsung.

Durability The Samsung 360 Round uses a uni-body chassis designed to reduce heat, removing the need for a cooling fan and minimizing size and weight. The compact design helps eliminate excess noise and reduce power consumption for hours of continuous shooting. Additionally, the 360 Round is IP651 dust and water resistant, making it an ideal choice for capturing content in the most challenging environments. With expandable connectors and ports, the 360 Round is designed to easily and quickly connect to additional equipment, such as an external mic, and storage for saving large files.

The Samsung 360 Round will be available in October in the United States before expanding to other markets over time. For more information please visit http://www.samsungmobilepress.com or www.samsung.com/galaxy