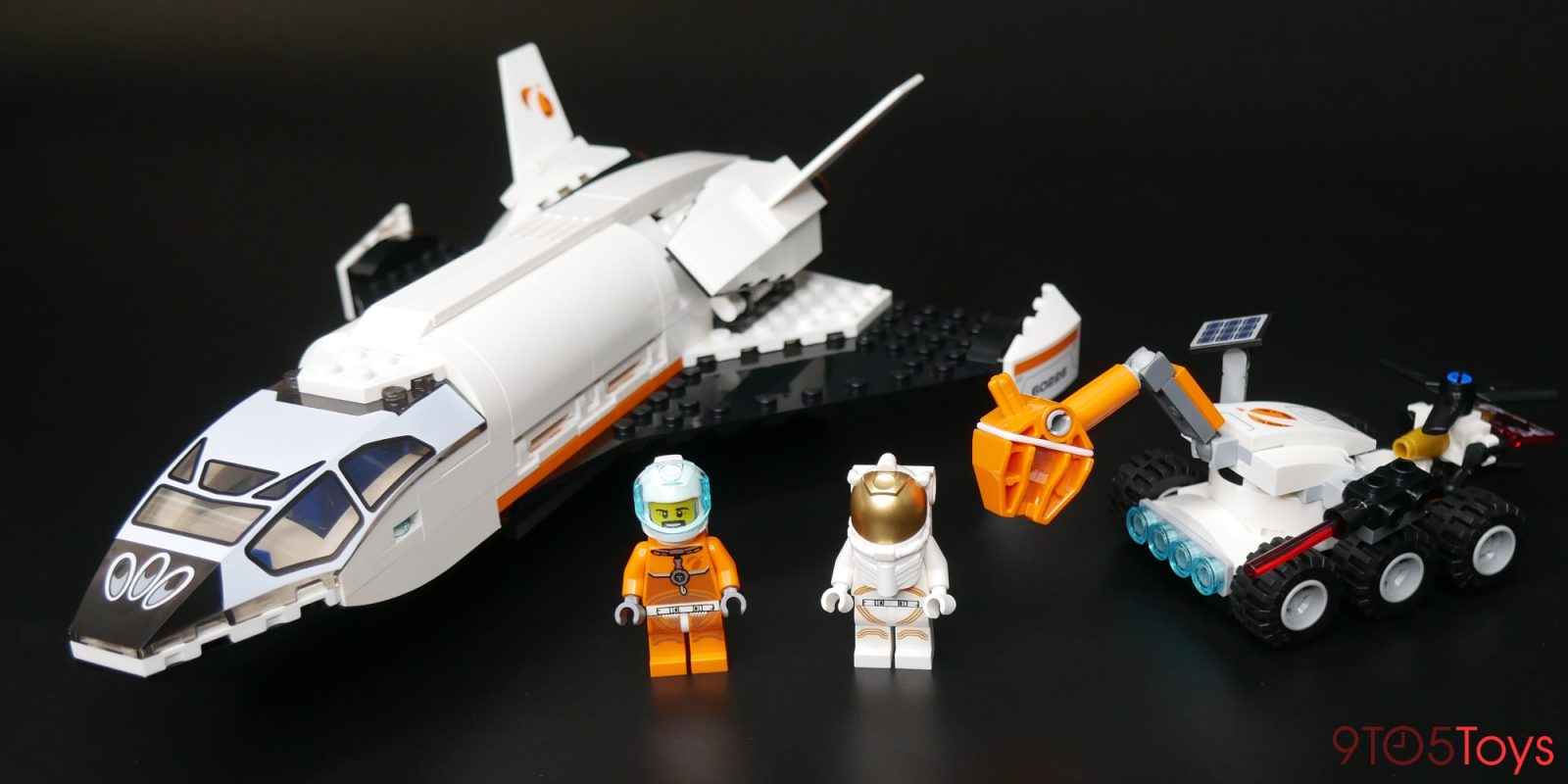 Back in April, LEGO announced a series of new space-themed City kits which fittingly debuted ahead of the Apollo landing’s 50th anniversary. Today we’ll be taking a hands-on look at one of the lineup’s kits, which enters at a mid-tier price. LEGO’s recent Mars Research Shuttle packs over 270 pieces and two impressive minifigures alongside the latest incarnation of brick-built space ship. Head below for a closer look.

Centering around journeying to Mars for an extraterrestrial research mission, the latest line of LEGO City kits bring some science fiction-fueled space travel into your brick-built town. As a middle of the ground set in the collection of space-themed builds, the LEGO Mars Research Shuttle is the only one of the releases to include the iconic vehicle.

Quite fittingly, the main aspect of this Mars-bound build is the LEGO research shuttle itself. It measures nearly 28 studs wide, 29 studs long and utilizes an overwhelming majority of the kit’s included elements.

Aside from just nailing the shuttle’s overall appearance, there are some built-in features which take the creation up a notch. On the front of the ship there’s a furnished cockpit with controls, which leads into the shuttle’s cargo area. This portion adds space for yet another minifigure as well as a storage device for some of the included Martian rocks. For the pieces it has been allotted, this City space build perfectly executes a simplistic design. It also makes great use of several different LEGO elements and techniques.

Of course, the most crucial aspect of a LEGO space ship is its swooshability, something that the Mars Research Shuttle delivers on that without a doubt. With a sturdy construction, this ship will have no problems standing up to more intense play sessions. 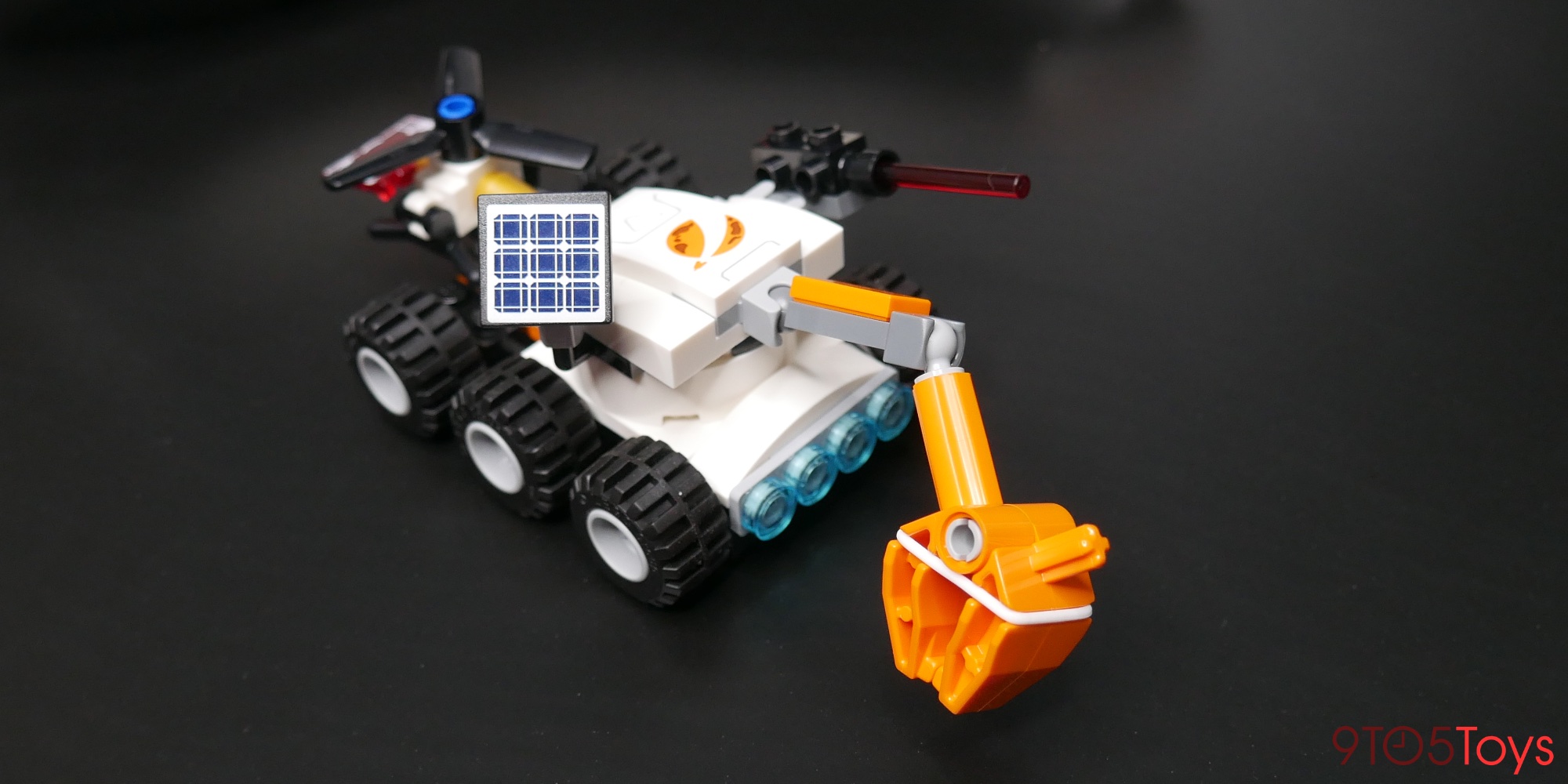 To coincide with the shuttle, the Mars research theme in this set is expanded with a LEGO rover. Secondary builds aren’t always appreciated, like we found with the Igor creation in Iron Man’s Hall of Armor. But here, the inclusion of the rover not only furthers the kit’s overall narrative and play features, but makes excellent usage of its pieces. Most notably, the vehicle has a large articulated grabbing arm, which can actually pick things up thanks to a rubber band-based mechanism. There’s also a little drone that attaches to the back. 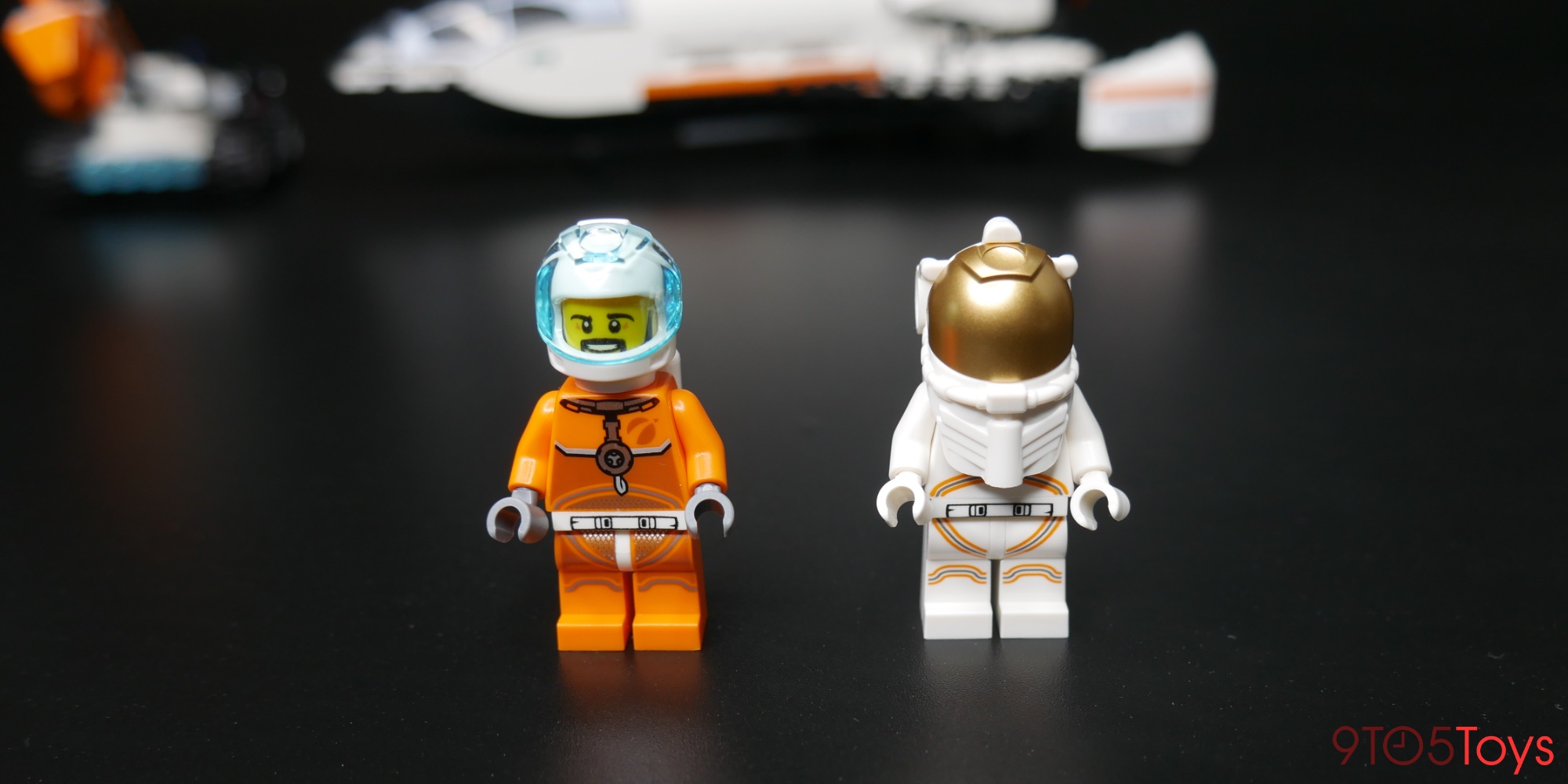 Included in the Mars Research Shuttle are two different astronaut minifigures. There’s a space walk-ready fig alongside a pilot-style character. Both feature exceptional printing, though the pilot figure stands out with some highly-detailed decals. On one hand, the more typical-looking astronaut doesn’t stray too far into the futuristic design that would accompany a mission to Mars. But on the other, the orange-suited minifig fits perfectly into the set’s overall theme. He looks straight out of a science fiction piece and is a great inclusion.

Entering with a $40 price tag, only getting 273 pieces isn’t a fantastic statistic in its own right. After all, $0.14 per brick is much higher than we’d like to see, especially from an unlicensed theme like LEGO City. But there are several inclusions that expand upon the set’s value past what you may initially expect. 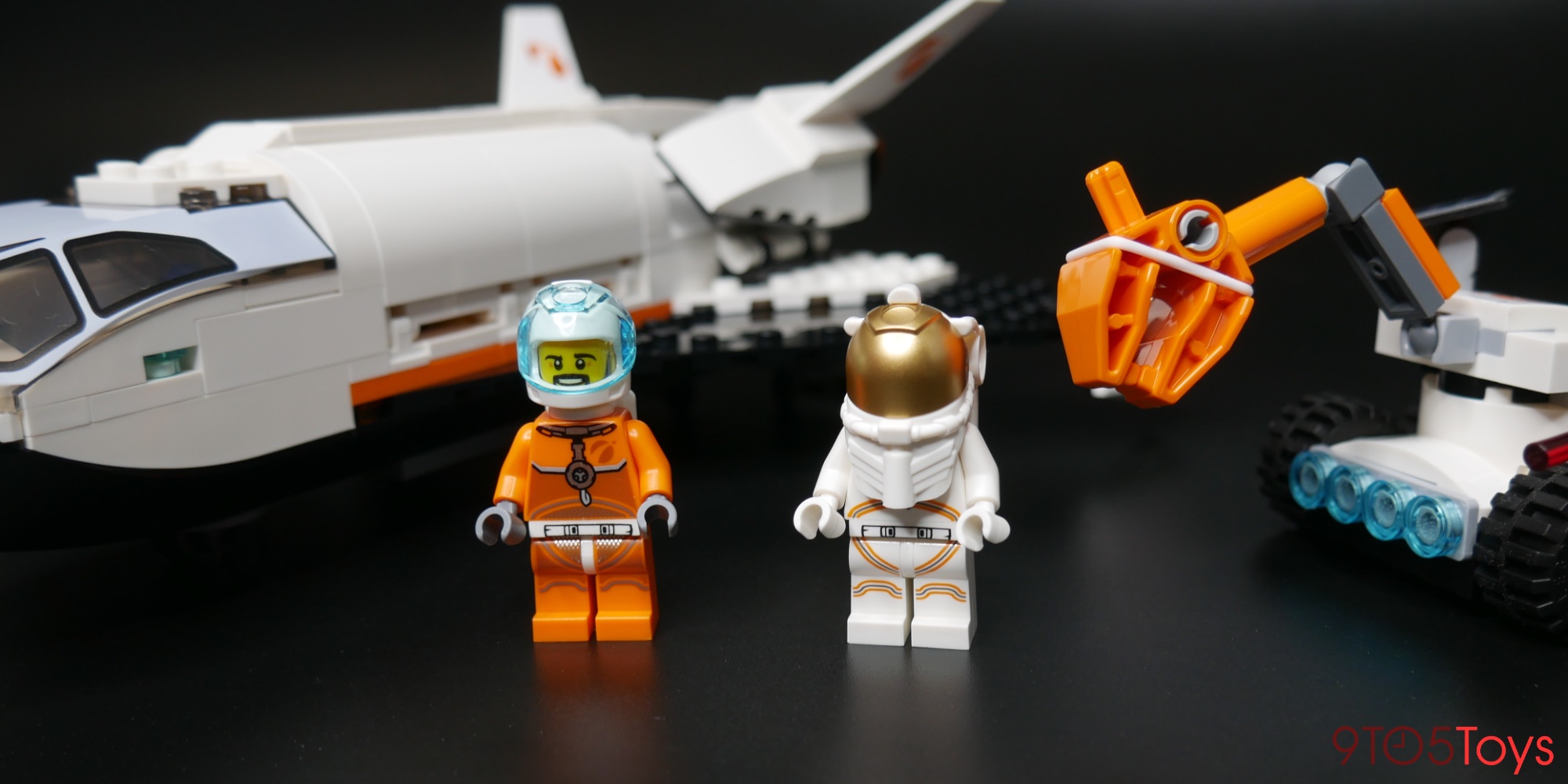 For one, the included minifigures are very notable in their own right. There’s also a selection of interesting LEGO elements that add to the Mars Research Shuttle’s value. It’s not that tiny greebles aren’t appreciated, but in a set of this scale, the decision to include larger bricks is always a plus.

LEGO’s summer 2019 City space sets are full of different ways to kickstart your brick-built space program, but the Mars Research Shuttle is a perfect sampler of what the wave offers. At the price point, getting a more complete playset is a rare occurrence, something that this interstellar creation perfectly executes on.

One downside with the Mars Research Shuttle is that LEGO has opted to rely on a variety of stickers for added details here. It’s to be expected at this point, and certainly on a sub-$50 set. The saving grace is a fully-printed windshield on the shuttle, which makes up for the stick-on decals in my opinion. 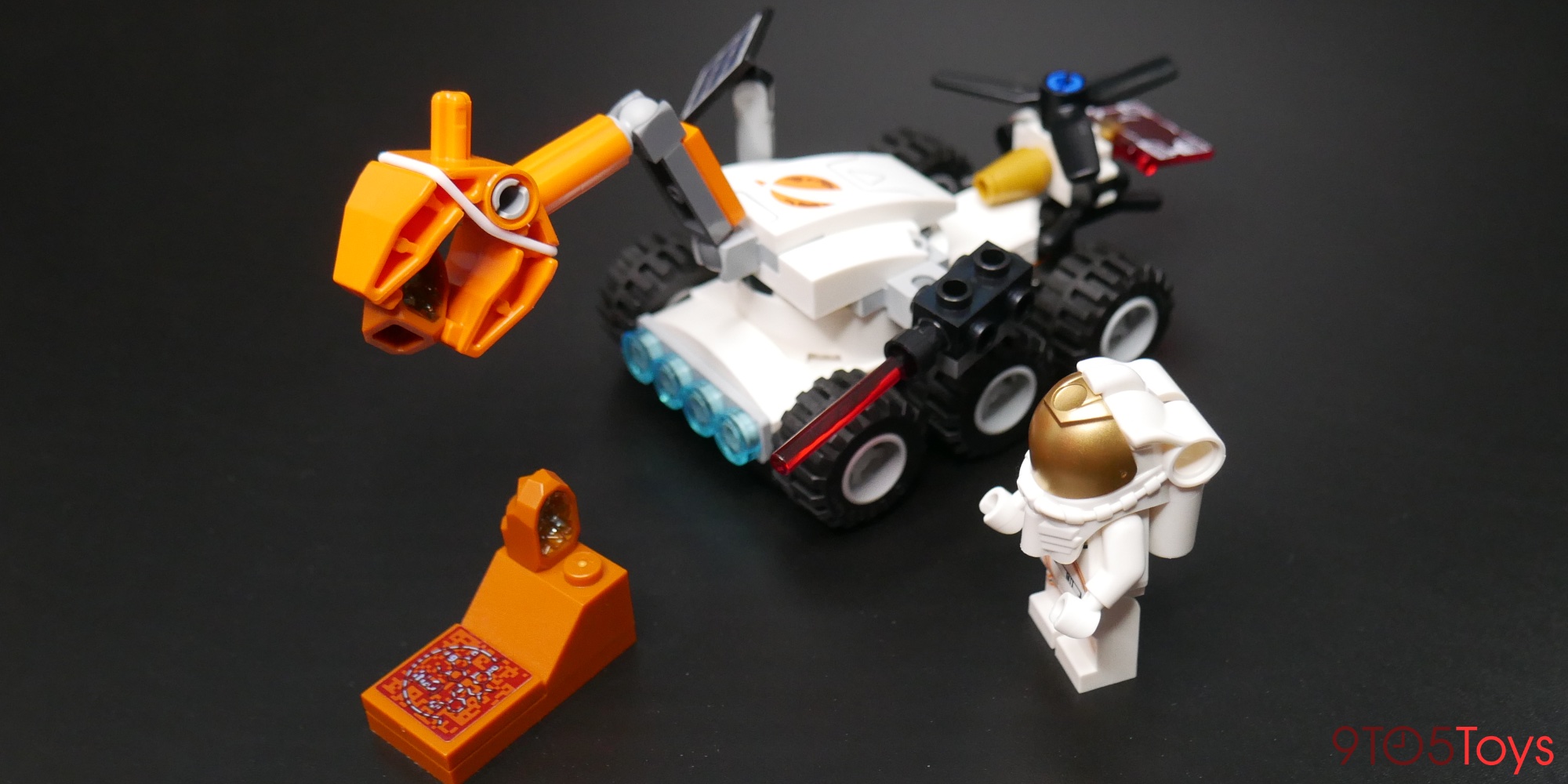 Worthy of atmospheric re-entry into your collection?

At $40, it may not be the best value part-wise, but it’s one of those kits where the completed model is solid enough to look past that. Kids will certainly enjoy the Mars Research Shuttle’s playability, while collectors or older fans will find it to be a notable option that’s more affordable than some of the other brick-built space ships.

As someone who fits into the latter category, I can certainly recommend this set. Especially to those who just want to add an out of this world creation to their collection without breaking the bank.