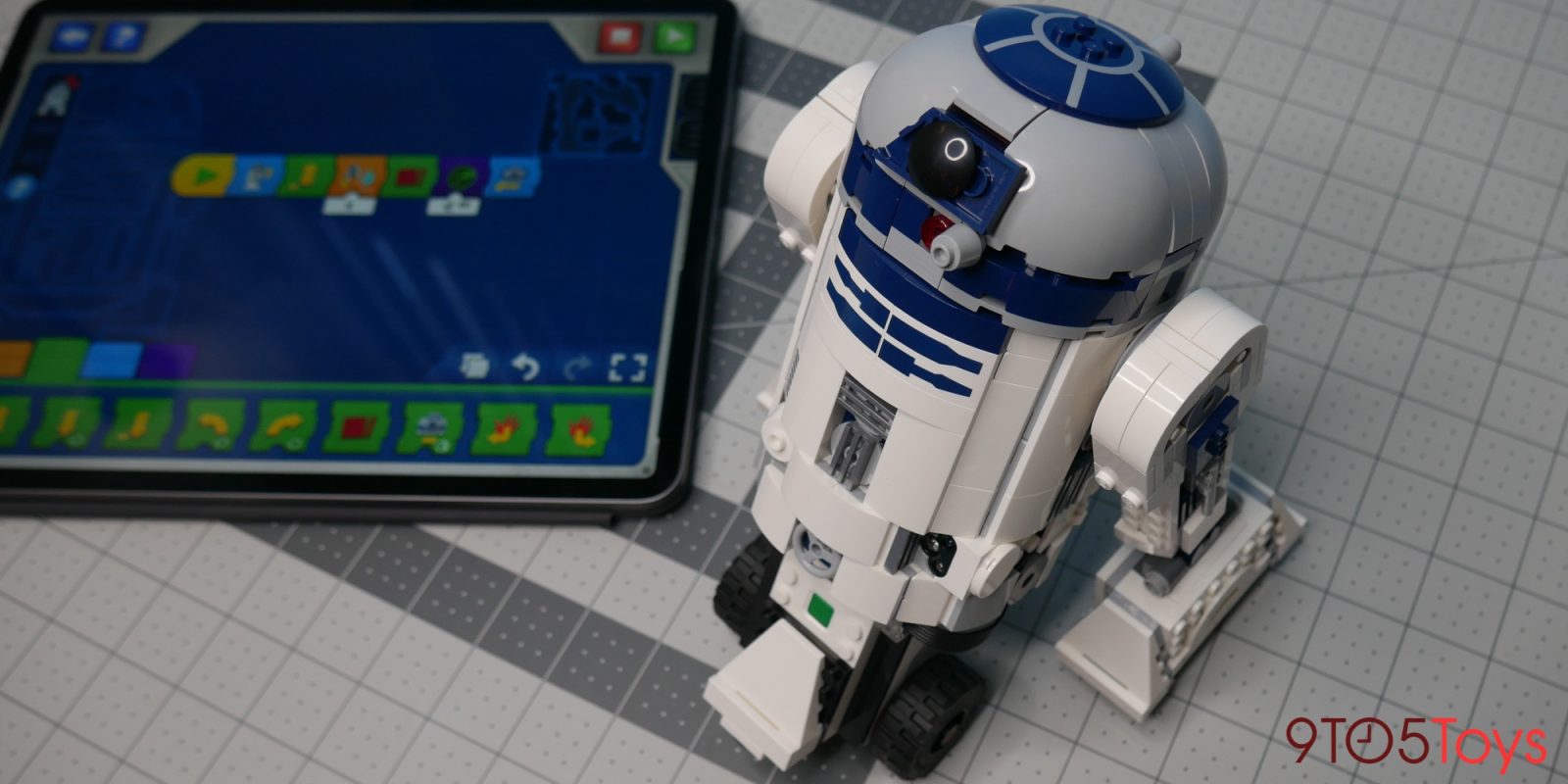 With the kids out of school for the summer, and classes being up in the air for the fall, today we’re turning our attention to LEGO’s Star Wars coding kit to see just how educational the Droid Commander set can be. With smartphone and tablet-enabled experiences, this 1,200-piece build has you assemble R2-D2 and other iconic droids from a galaxy far, far away. Head below for our full hands-on review of the LEGO Droid Commander set.

After making a selection of its education-only STEAM sets available to the public earlier this year, LEGO’s Droid Commander set received plenty of competition. So we decided to see what it has to offer for LEGO builders and coding apprentices alike.

The 1,177-piece set assembles three different droids from the Star Wars universe. There’s of course R2-D2, as well as a Gonk Droid and Mouse Droid. Each of them interacts with the included Move Hub in different ways, and pair with various coding challenges to make use of their unique designs. To pair with the Bluetooth-enabled hub, there’s also a color and distance sensor, as well as an extra motor. 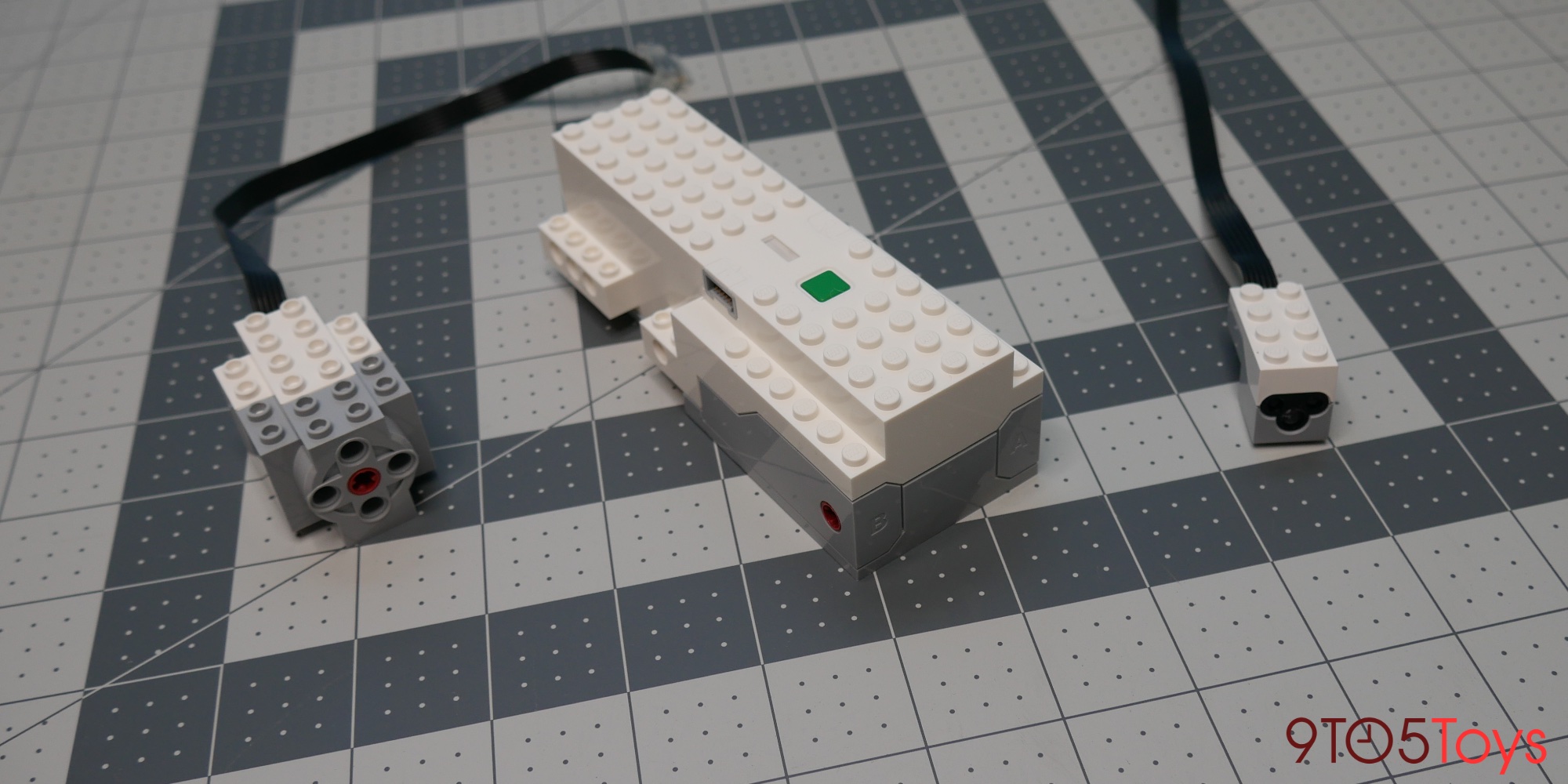 Right off the bat, the LEGO Droid Commander set stands out from pretty much every other creation in the regard that there aren’t any instructions included. You’ll have to boot up a smartphone or tablet and install the companion app, which guides you through assembling the droids piece by piece. It’s actually a pretty enjoyable experience and the ability to view models in 3D as you build them definitely has its perks.

Hands-on with the droids

As for the droids themselves, we’ll take a look to see how all three stack up. R2-D2 is easily the star of the show and the most complex build from the bunch. There are plenty of interesting techniques used to assemble the droid’s iconic design and allow it to actually move around. The Move Hub acts as R2’s third wheel and lets him drive around, while a third motor allows the bot’s head to spin. 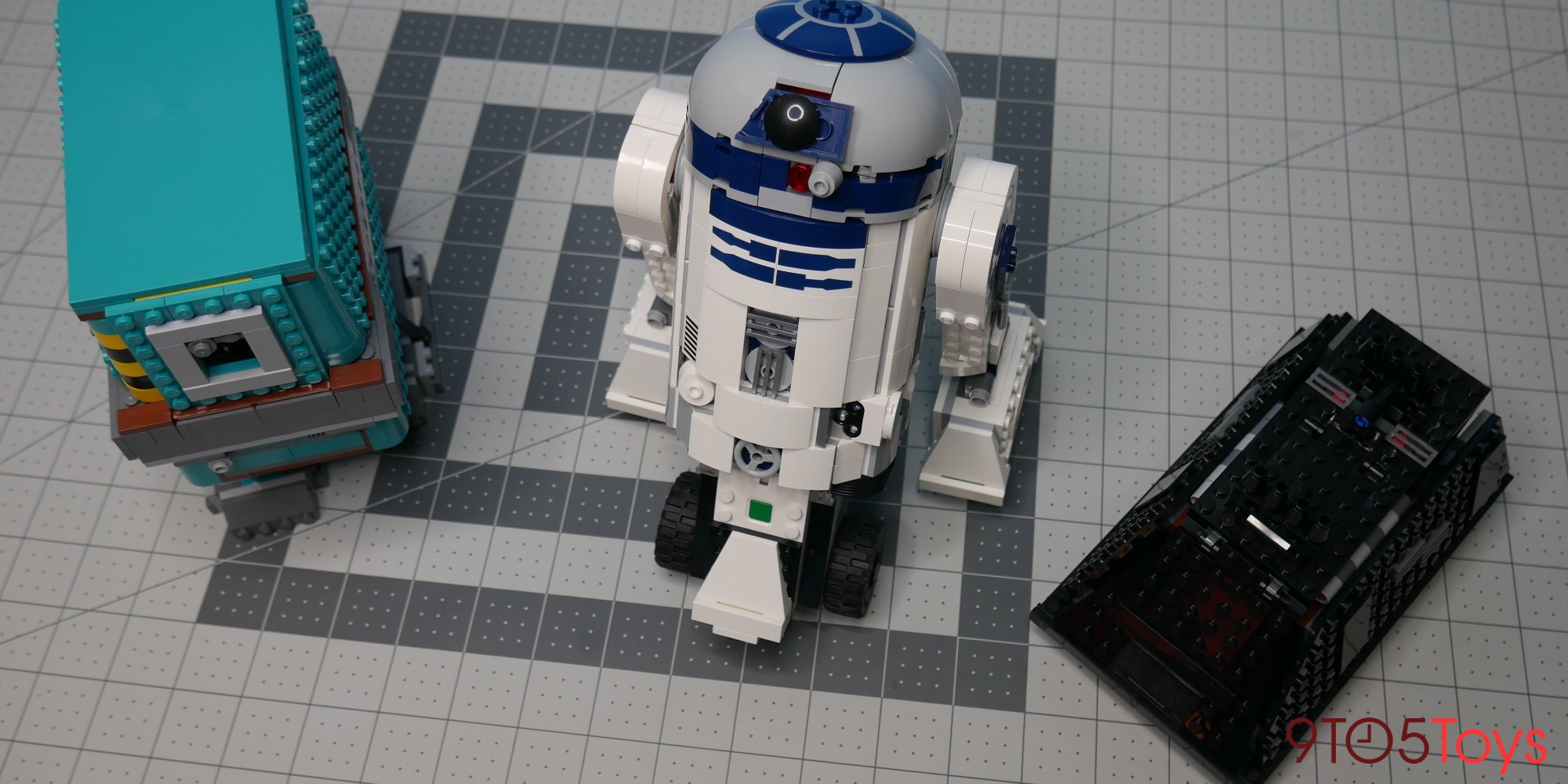 Then there’s the Gonk Droid, which is my personal favorite. This creation forgoes any wheels in order to let it actually walk around. The mechanism used here is genius and even had me, a veteran builder, marveling over how novel the unitized techniques are. Plus, the actual design nails the droid’s overall look with some unique teal-blue bricks.

Lastly, you’ll assemble a Mouse Droid. The build is the simplest of all three and makes for the least compelling model in the set. It’s not bad, it just lacks some of the wow factors that both R2 and the Gonk Droid have. It’s essentially an RC car-themed from a galaxy far, far away, which means it’s fun to just drive around.

Printed pieces are yet another perk

Another aspect of the set that LEGO fans are sure to appreciate is the included printed elements. Often times when LEGO releases kits like this, it’ll opt to include some stickers instead of creating exclusive bricks for a one-off set. But not this time. The most notable of these is a dish piece that helps make up R2-D2’s dome. There are also some other bricks that pull off the droid’s iconic look, which are certainly appreciated by this builder, as well. 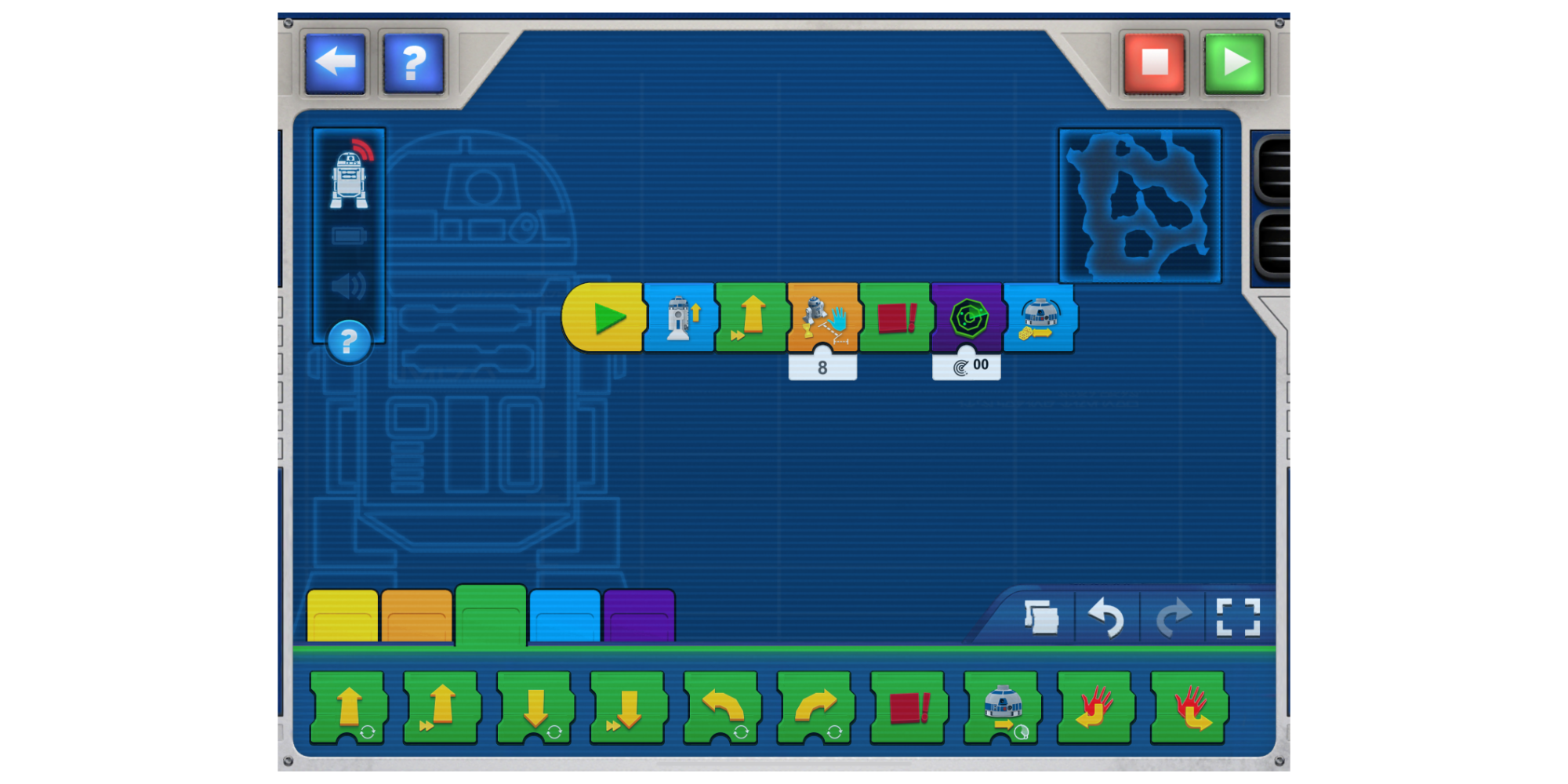 On top of assembling all three droids, a good portion of this set’s value comes from its coding capabilities. Each of the robots offers up different experiences in how you’ll actually go about programming them thanks to the included Move Hub. This Bluetooth-enabled brick allows the set to pair with a companion smartphone app and packs two motors. There’s also ports to connect yet a third motor, as well as a distance sensor.

The app is themed like a brick-built version of the Mos Eisley, complete with the Cantina, Watto’s junk shop, and more. It’s definitely a fun experience and stands out from other coding kits we’ve taken a look at in the past, even other Star Wars ones. The familiarity of the characters who help guide you on both assembling the droids and coding them will surely take some of the edge off those learning to program for the first time.

But when it comes to actual content, the LEGO Droid Commander set is a bit lacking in the coding department. It’s not as thorough as something from Kano, and relies more on the basics than anything too in-depth. The drag and drop interface is fine, it breaks common coding fragments into little blocks to be interchangeably connected as you see fit. Though you can actually pull off some pretty novel things with the droids, but don’t expect anything too complex. 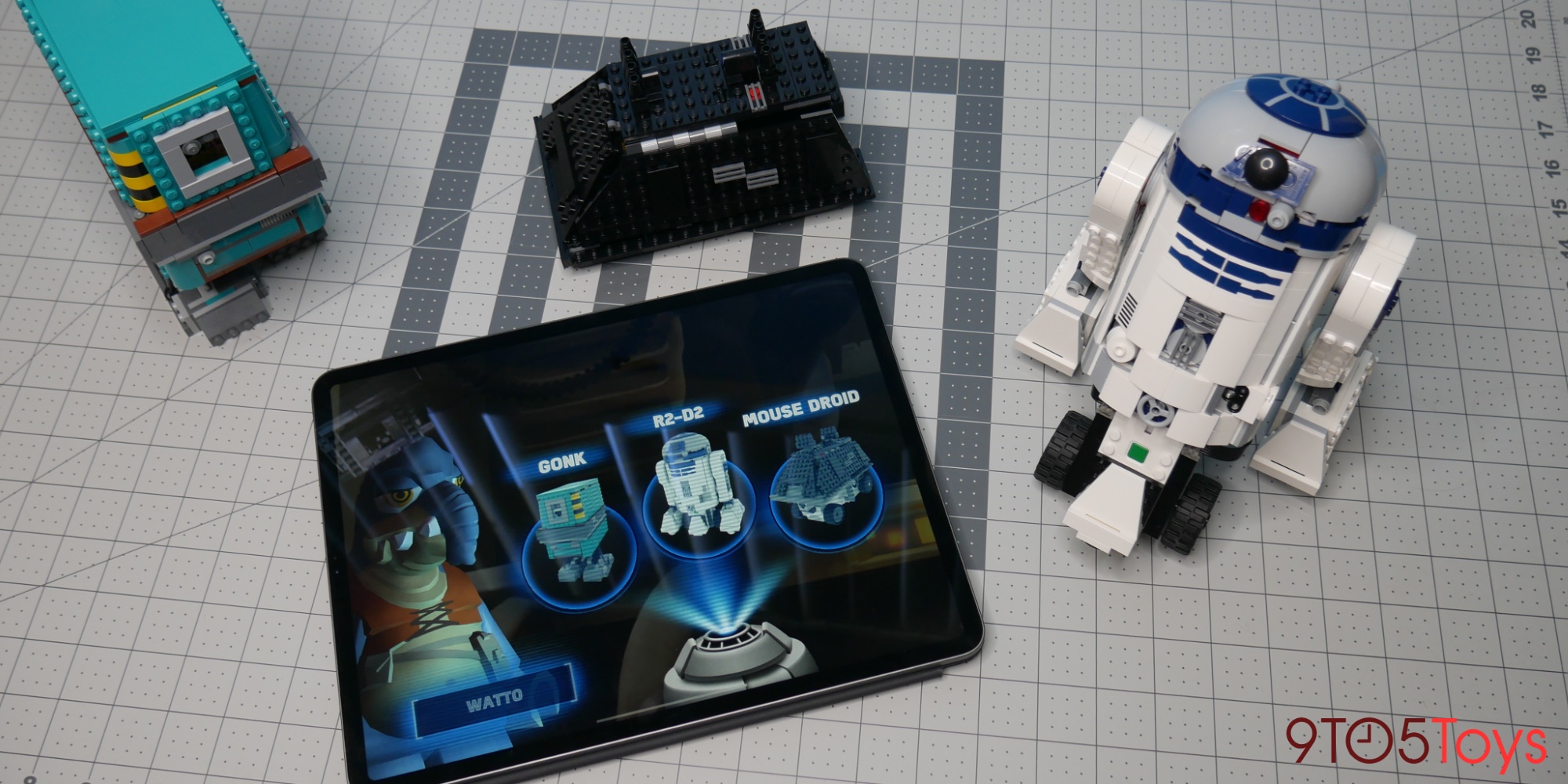 Entering at the $200 price point, the 1,177-pieces included here enters with a pretty poor part per dollar ratio. But considering that the Move Hub alone sells for $80, with the sensor and motor adding in another $50 in value, it’s actually not that bad of a set price-wise. Yes, it might be a little high for a coding kit, but the Star Wars charm and replay potential that LEGO is known for make it worth it in my book.

And better yet, the Move Hub adds even more value when you consider that it can be reused with your own custom creations, or adding some motorized functionality to any number of official sets. 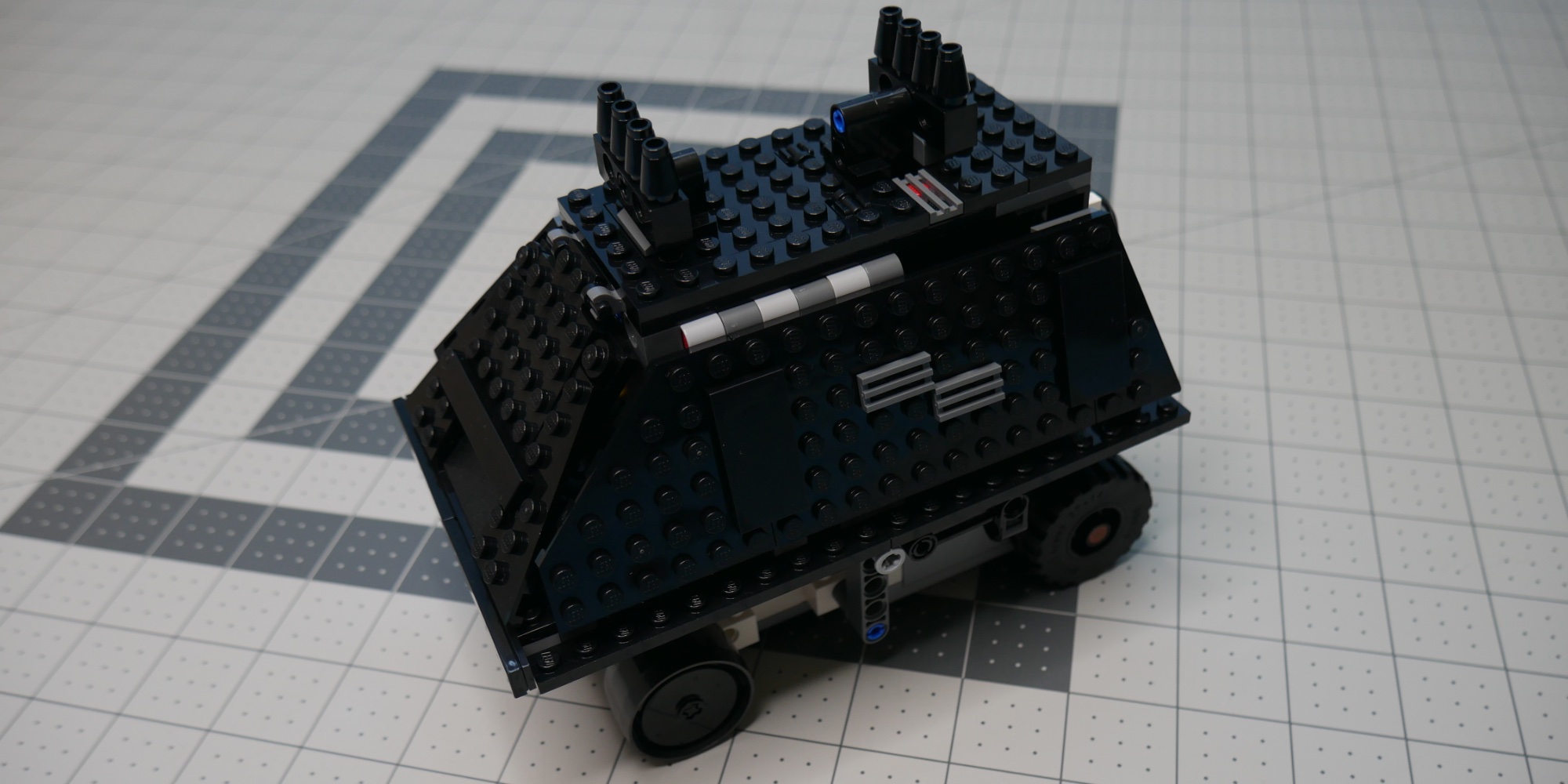 How does it compare to other sets?

Aside from being a solid value in its own right, the LEGO Droid Commander set stands out from everything else you’ll find on the market, as well. There aren’t too many STEAM kits in the LEGO stable period, let alone another with branding from an outside property. Even when you leave the LEGO sphere, there are few coding kits that have the kind of long term value proposition as this one does.

The pairing of Star Wars and STEAM is a tried and true concept that LEGO elevates with the kind of charm and thoroughness you’d expect. Even though the coding portion isn’t as in-depth as some of the more traditional coding kits out there, the theming and very fact that it’s LEGO more than makes up for it. At the end of the day, even once you’ve exhausted the coding challenges, there’s still so much to like about this set. The droids themselves are really solid creations in their own right, and the Move Hub is a great thing to have on-hand for LEGO builders.

So whether you’re looking to give your kids some educational content as the summer winds down, or you just want to tinker with some brick-built RC droids, the LEGO Droid Commander set is worth considering.