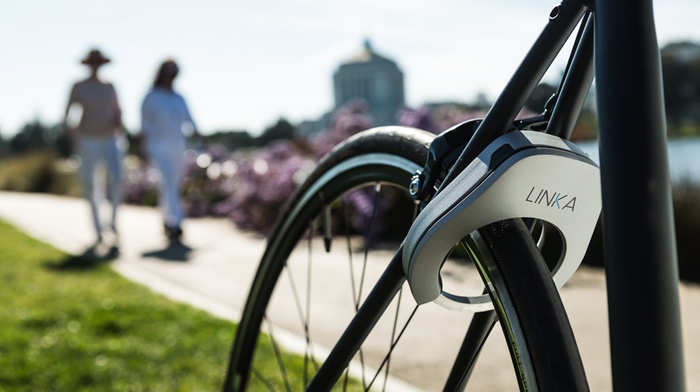 Bike theft has long been an issue for riders of all ages. No matter the value of your bicycle, it has always been seen as an easy target for someone looking for a new ride or to make a few quick bucks. There is a new Kickstarter campaign that combines the convenience of a smartphone connected device with the security of re-inforced steel. Meet LINKA, the “world’s first” auto-unlocking smart bike lock…

The beauty of LINKA lies in its ability to recognize your location in relation to the bicycle, automatically unlocking the bike when you get close with your phone. LINKA secures the bike via a 9mm thick hardened square steel ring that retracts into the device itself. It is hard mounted to the brake bridge, as long as holes are provided for the device to latch on to. The lock can reach around any wheel that is within 94mm of the mounting hole.

Smartphone connectivity is what ultimately delivers a unique bicycle accessory. Aside from using location data to unlock the bike when you approach, the iOS/Android app alerts users when the bicycle is moved for any reason. The built-in accelerometer on LINKA detects movement, sending a push notification to your device. Additionally, it sets off a 100 dB siren when the bicycle is moved without the phone nearby.

LINKA connects with your iPhone via Bluetooth 4.0 and has a USB rechargeable battery that is rated to last nearly a year between charges. If you’re without your phone, LINKA can still be unlocked by entering a code on the side of the lock. It also collects data from bikeindex.org, alerting users of locations that have many reported stolen bikes in the area.

The idea of LINKA is well executed, although the design could be a little more refined. It’s a great start to a product category that is in desperate need of innovation. With 25 days to go in the Kickstarter campaign, Linka has already raised 128% of its $25,000 goal. Many of the early bird funding options are gone, but you can still get one in black or silver for $99 with an estimated delivery date of November/December.