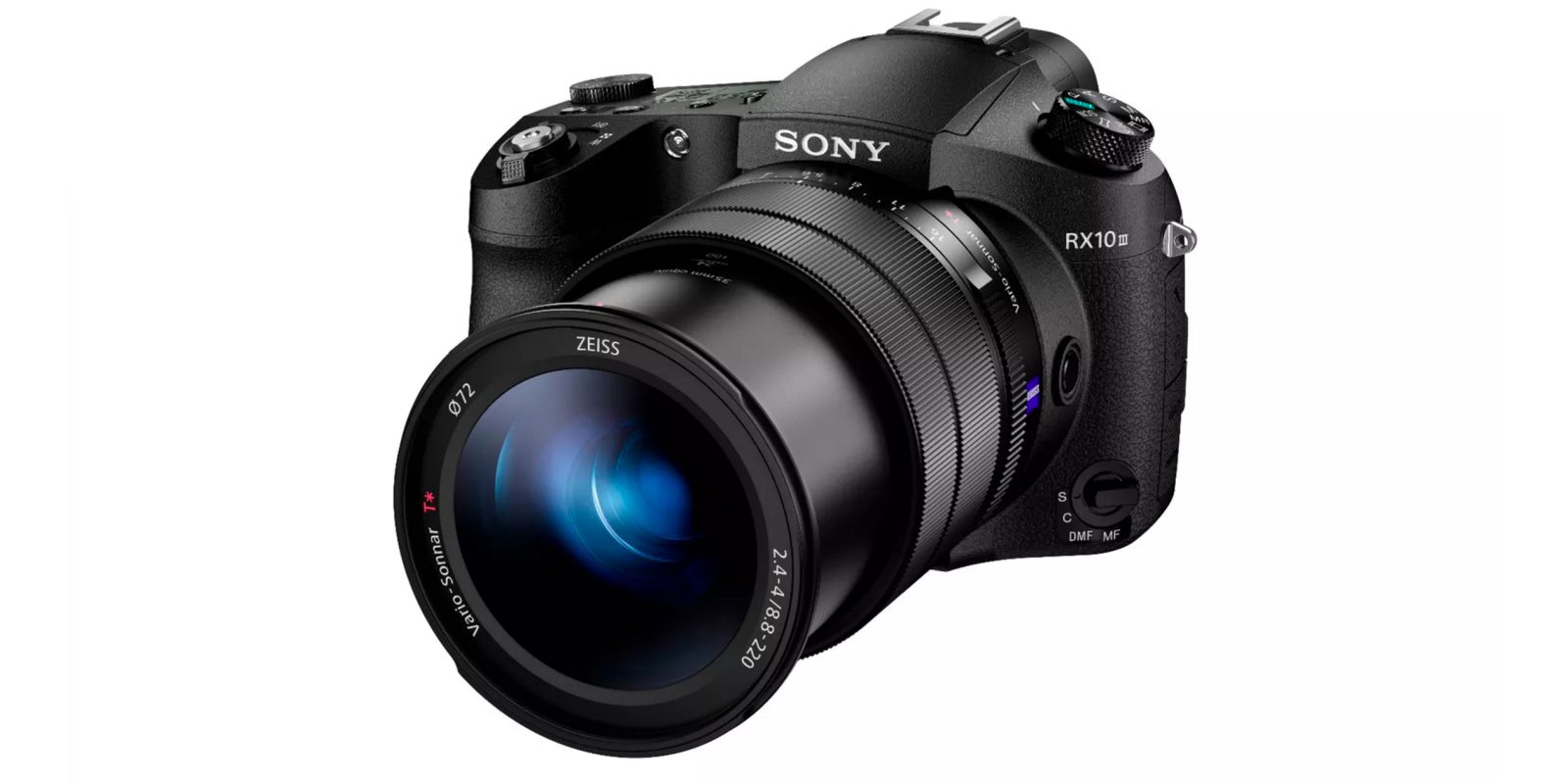 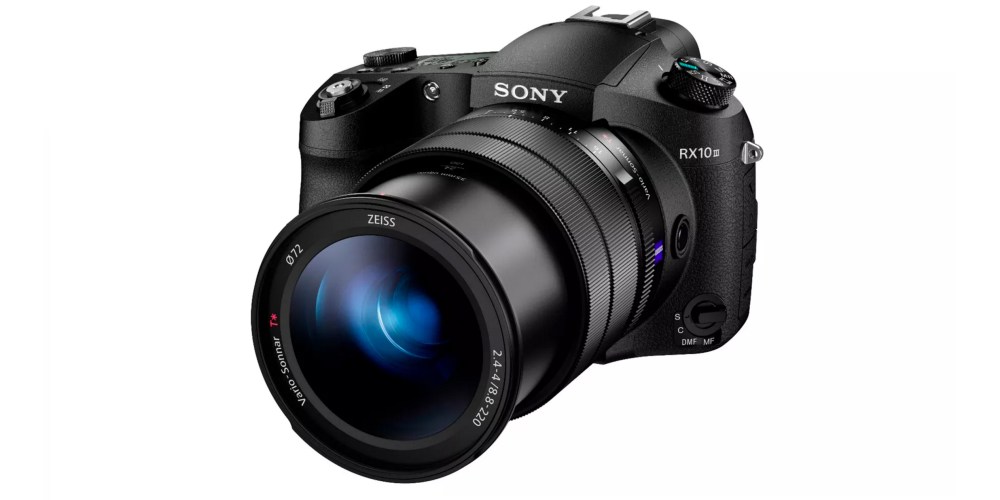 Sony has unveiled a new camera that is packed with technology and a superzoom lens. The Cyber-Shot RX10 III is yet another large-sensor release capable of capturing 20+MP photos. Although Canon and Nikon remain top dogs in the world of DSLRs, Sony’s latest will turn some heads with its 4K capabilities and massive built-in lens. More below.

The RX10 III starts with its 20.1 MP one-inch-type sensor which works in tandem with an impressive 24-600mm lens. In comparison to the previous generation model, the F2.4-F4 optic has triple the zoom capabilities. While the RX10 II did have 4K capabilities, the lens is what stands out on this year’s release. Going from 24-600mm allows photographers to capture a wide range of images based on the environment. For comparison, Canon’s recently released T6 only ships with an 18-55mm lens.

Another standout feature is Sony’s Optical SteadyShot image stabilization system that should be particularly useful when the lens is fully extended. Because the minimum focusing distance is 72cm, the RX10 III offers near tele-macro capabilities. 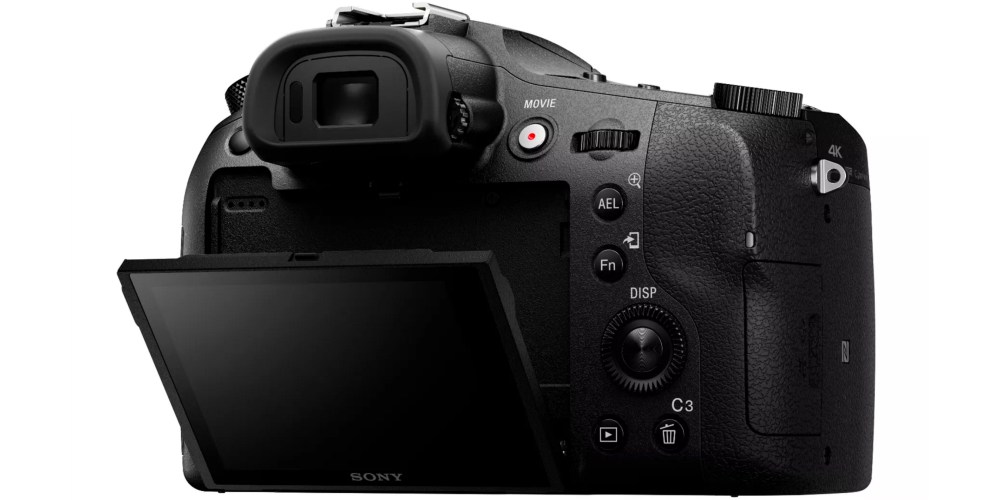 Rounding out the list of bells and whistles is 4K video at 30/25/24 frames per second and Full HD 1080p at 960fps. There is a tilting three-inch LCD monitor with 1,288k dots that complements an impressive OLED electronic viewfinder (2,359k dots). Of course, it has built-in Wi-Fi and NFC for wirelessly transferring photos or videos to your device. Without going hands-on, the specs alone point to this camera being one of the most versatile on the market today.

The Sony Cyber-Shot RX10 III with be available in May for $1,500 at authorized Sony dealers.

Featuring a newly-developed 25x super-telephoto zoom lens with an extensive focal range of 24-600mm1, the new RX10 III camera is able to produce high-quality content at a variety of focal lengths and camera settings that would require three or more large, heavy and expensive lenses for an interchangeable lens camera user.  It’s an outstanding choice for shooting anything from landscapes to distant wildlife and everything in between.

The RX10 III high zoom camera is equipped with a 1.0 type stacked 20.1 MP Exmor RS™ CMOS sensor with DRAM chip and advanced signal processing, along with a powerful BIONZ X™ image processor.  These components work together to ensure the highest possible image quality throughout the entire zoom range of the 24-600mm lens.  Additionally, they are responsible for a variety of standout professional-caliber features including 40x super slow motion video capture at up to 960 fps, an ultra-fast Anti-Distortion Shutter with a maximum speed of 1/32000 second, high resolution 4K movie shooting and more.

“By pairing the convenience of an ultra-telephoto lens with our innovative stacked CMOS image sensor design, we’ve created a whole new image experience unlike anything else in market today,” said Neal Manowitz, Vice President of Digital Imaging at Sony Electronics.  “The new RX10 III offers a true ‘all in one’ package that will appeal to a wide range of amateur, hobbyist and professional photographers and videographers.”

The impressive 24-600mm ZEISS® Vario-Sonnar T* lens on the Cyber-shot RX10 III camera features a large maximum aperture of F2.4 – F4.0,  helping it achieve outstanding image quality throughout the entire zoom range, all the way up to ultra-telephoto.  This differentiates it from many other high-zoom lenses that often struggle with light-gathering at longer focal lengths.  The aperture unit itself has nine blades that are designed to create a near perfect circle in the F2.4 – F11 range, enabling shooters to create content with beautiful bokeh, where the subject stands out against a softly defocused background.

The new lens has built-in Optical SteadyShot™ image stabilization that helps to reduce camera shake and image blur, in particular when shooting at longer focal lengths.  When active, the OSS is equivalent to shooting at a shutter speed approximately 4.5 stops3 faster than the current setting of the camera.

Additionally, with a minimum focusing distance of 72 cm (2.36 ft) and 0.49x maximum magnification at a fully extended 600mm, the new lens is capable of producing amazingly detailed tele-macro images.

Additionally, the rear of the sensor has a DRAM chip that allows it to read and process large volumes of data exceptionally fast, enabling the camera to shoot super slow motion video at up to 960 fps.  The powerful DRAM chip also allows the RX10 III to shoot continuously at up to 14fps with minimal blackout.

With shutter speeds as fast as 1/32000 second, the electronic shutter on the RX10 III minimizes image distortion at faster shutter speeds.  It also offers silent shooting at all settings and speeds, ensuring all content can be captured quietly without disrupting the subject, a powerful feature when combined with the wide-ranging zoom lens.

The new RX10 III model becomes the latest and most versatile Cyber-shot RX camera to offer the advantages of 4K (QFHD 3840×2160) movie recording thanks to its far-reaching 24-600mm lens, which gives videographers the luxury of shooting high quality 4K video from extreme distances.

In 4K video mode, the RX10 III camera utilizes full pixel readout without pixel binning, capturing approximately 1.7x more information than is required for 4K movie output to enhance image detail and minimize moiré and jaggies.  It achieves these high-quality results through use of the XAVC S codec, which records video at a high data rate of up to100 Mbps during 4K recording and up to 50 Mbps during full HD recording5.

The new camera also has a variety of other professional caliber video features including Picture Profile, S-Log2/S-Gamut, Gamma Display Assist, Time Code and more, as well as input for external microphone and output for headphone monitoring.

The new RX10 III also possesses the ability to record super slow-motion video at up to 40x slower than the standard rate, allowing users to capture and replay fleeting moments of action with incredible detail, resolution and clarity.

The new RX10 III camera is equipped with an impressive autofocus system with spatial object detection, allowing the camera to detect and predict motion of a subject before the shutter button is pressed, This helps the camera achieve an incredibly fast and efficient AF response when the shutter is halfway pressed, enabling it to lock on to a subject in as little as 0.09 seconds8.  This is a yet another compelling technology, especially when paired with a versatile, highly capable 25x zoom lens with a range up to 600mm.

Aesthetically, the new RX10 III features a number of upgrades compared to existing RX10 models including triple lens rings for focus, zoom and aperture for direct, precise control.  The hand grip shape has also been optimized for the new high-magnification, large-aperture lens to enhance stability when holding the camera at eye level.   There is a new focus hold button on the lens barrel as well, allowing the focus to be easily locked on a subject while the shooter reframes the image.

The new model features a high-contrast XGA OLED Tru-Finder™ with approximately 2.35 million dots of resolution, ensuring true-to-life image preview and playback functionality.  The camera is also dust and moisture resistant and both Wi-Fi® and NFC™ compatible, with the ability and can access Sony’s growing range of PlayMemories Camera Applications.  Learn more atwww.sony.net/pmca.  A dedicated LCJ-RXJ soft carrying case will also be available for the new camera.

The new Sony Cyber-shot RX10 III extended zoom camera will be available this May for about$1,500 US and $2,000 CA, respectively.

The new cameras and all compatible accessories will be sold at a variety of Sony authorized dealers throughout North America.  More information can be found here.

A variety of exclusive stories and exciting new content shot with the new RX10 III cameras and other high-end Sony imaging products can also be found at www.alphauniverse.com, Sony’s community site built to educate, inspire and showcase all fans and customers of Sony imaging products.