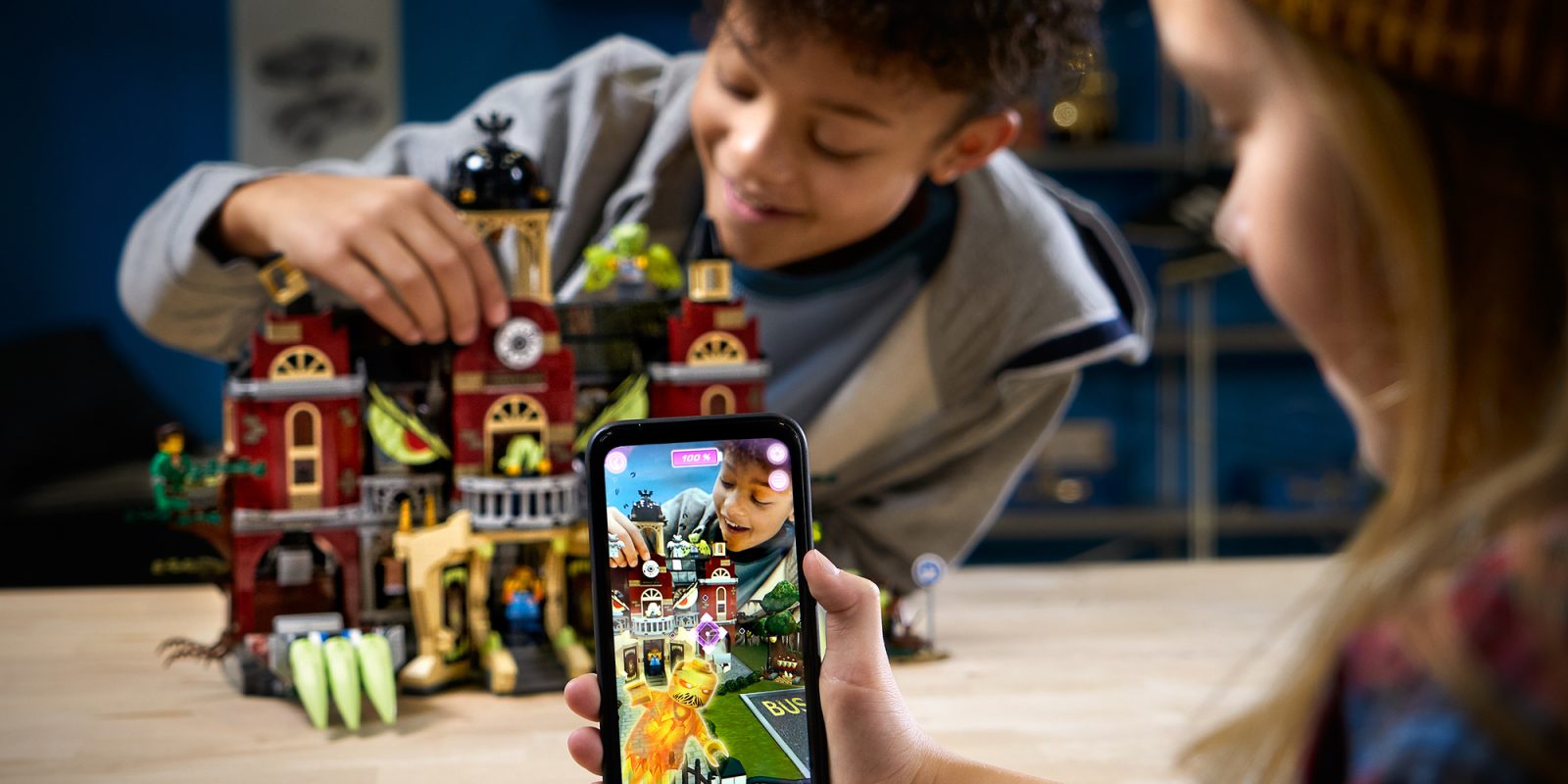 Ahead of New York Toy Fair this weekend, LEGO has unveiled an entirely new line of kits, Hidden Side. By pairing traditional brick-built creations with a companion smartphones app, the new theme introduces Augmented Reality to bridge the gap between physical and digital play. Centered around a series of haunted builds, LEGO Hidden Side will be launching later this year with eight kits.

Earlier this week we got a glimpse at three upcoming kits from The LEGO Movie 2. Today LEGO has launched Hidden Side, a line of Augmented Reality-Enabled sets. This marks yet another notable attempt by LEGO to pair its physical kits with companion software. While LEGO Dimensions was a full-blown video with bricks added in, Hidden Side is like the exact opposite; normal sets that pair with a smartphone app.

In the app, you’ll take a first-person perspective through your phone’s camera to uncover mysteries and solve paranormal occurrences. Completing tasks in the app will require you to physically interact with the physical model. The AR technology is based around the AR platform Vuforia, but leverages some aspects of Apple’s ARKit, according to our LEGO PR representative. The new series of sets are every bit as substantial as any other release and range from $20 up to $130. 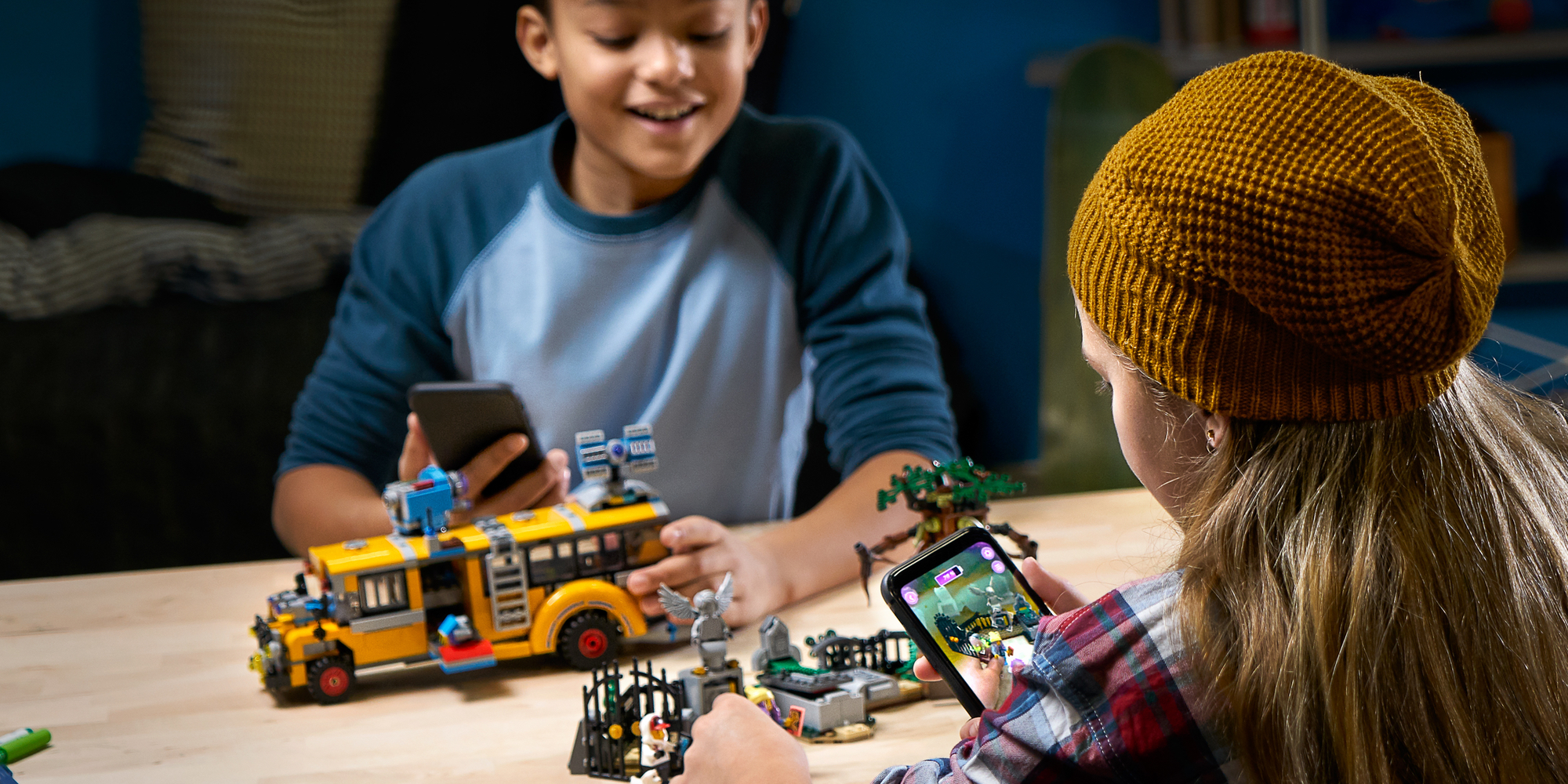 LEGO Hidden Side sets include:

We’ve seen this approach before with Ninjago and Nexo Knights sets, though things seem to have improved this time around. The companion app, which will be able for both iOS and Android devices, works both in tandem with the sets and as a standalone game.

When paired with the brick-built creations, the app will implore LEGO builders to interact with various aspects of the set. With all of the sets falling into the haunted theme, many of the in-app experiences are centered around release virtual ghosts that must be captured. 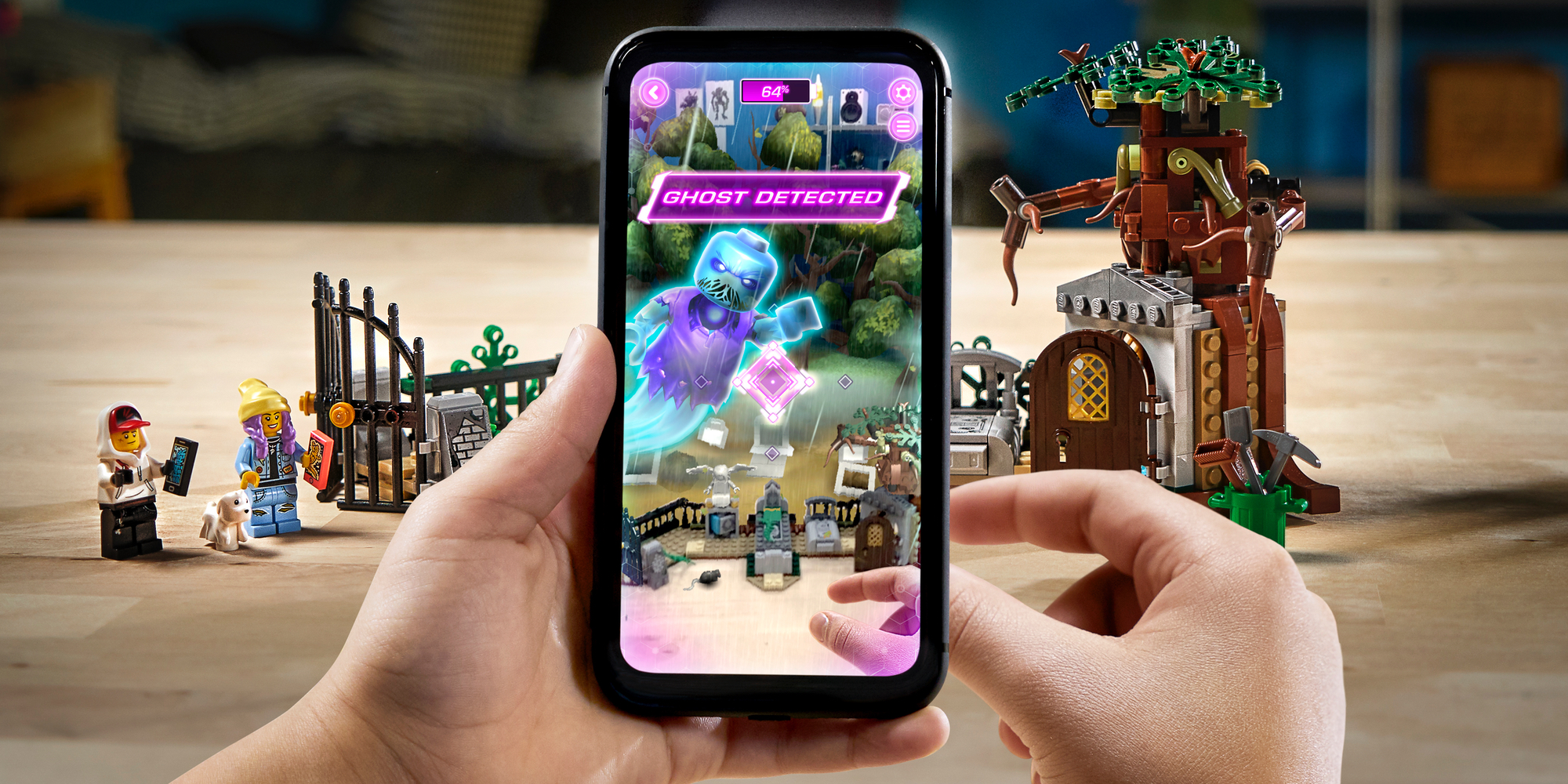 LEGO is also committing to adding content in the future, noting that it will continue to add  “new ghosts, new game challenges, and randomization of gameplay so the experience is different every time kids play.” LEGO Hidden Side will be launching in the late summer of 2019.

I’m personally a big fan of LEGO’s console video games. But previous attempts at merging kits with companion apps have left a lot to be desired. Even if LEGO Hidden Side isn’t aimed towards an older demographic, it certainly looks a lot more impressive than past implementations.

It’s clear that LEGO took a different approach to developing the new theme as well. Rather than it feeling like the kits were made to help sell the app or vice versa, each side of the equation feels equally solid. Not to mention that the AR technology is drastically improved this time around as well.

All-in-all, it’ll be interesting to see how LEGO moves forward following Hidden Side. If the theme does well, I’m sure we’ll start seeing AR paired with other lines like Star Wars and more. 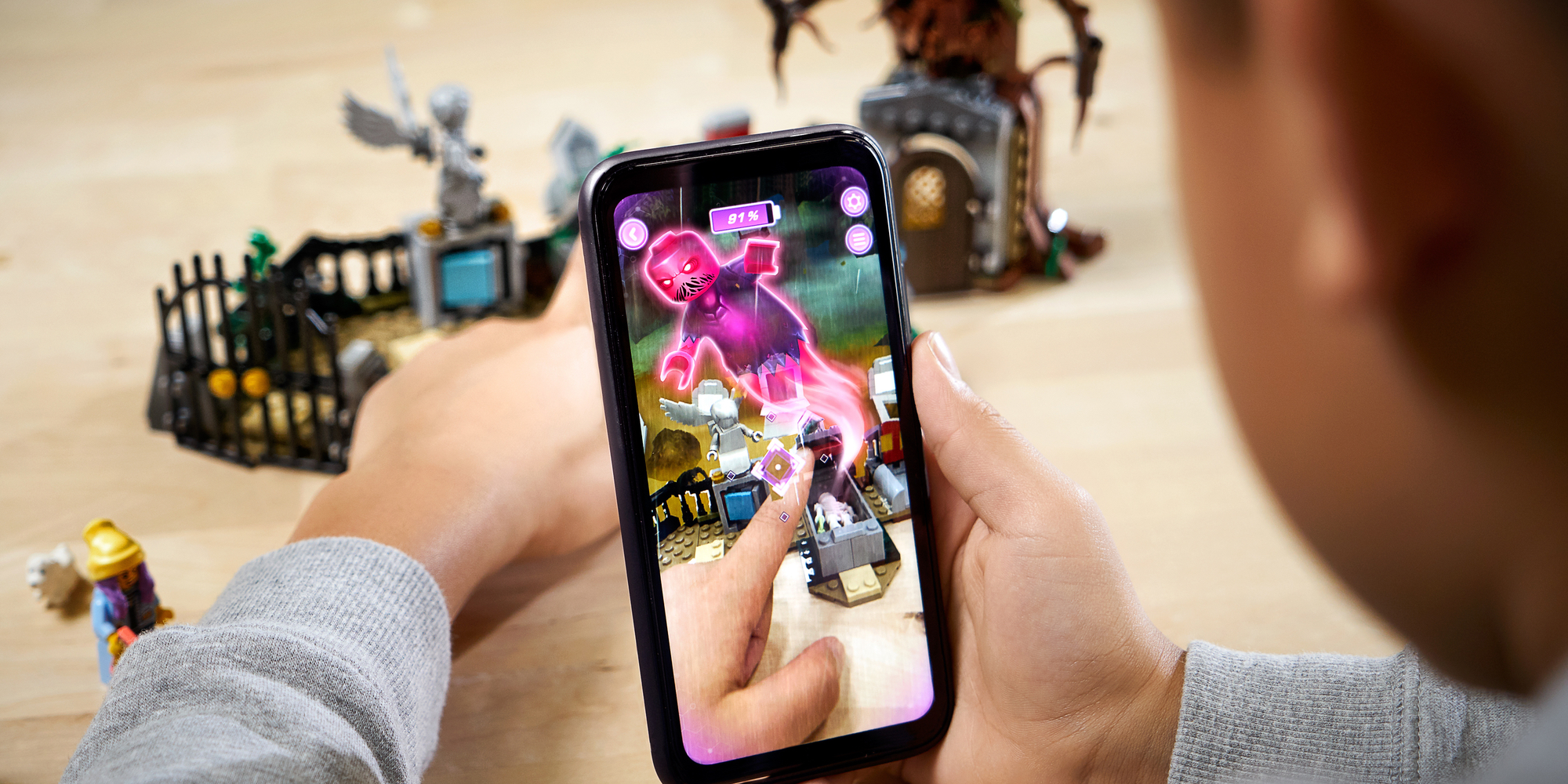 NEW YORK (February 14, 2019) – The LEGO Group today unveiled LEGO® Hidden SideTM, anaugmented reality-enhanced LEGO play theme where kids must turn a haunted world back to normal, one ghost at a time. It is the only play experience available today that fully and seamlessly integrates augmented reality (AR) with physical construction to reveal a hidden world of interactive play. Developed for children 7 years and up, LEGO Hidden Side is showcased to buyers, media and influencers for the first time at American International Toy Fair Booth in Booth 1335 of Hall 3B at the Jacob K. Javits Convention Center, February 16 -19.

LEGO Hidden Side includes a series of eight “haunted” building sets full of awesome functionalityand secret surprises that, on their own, provide the build and roleplay fun of any LEGO play theme. Activating the bespoke AR app developed together with the theme brings the models to life, revealing a hidden world of interactive mysteries and challenges to solve. When combined, the two worlds make each other even more compelling and fun.

“Our years of experience pioneering the convergence of technology and physical play have taught us that kids expect exciting play experiences that move seamlessly between physical and digital worlds– something we call fluid play,” said Tom Donaldson, senior vice president, Creative Play Lab at the LEGO Group. “At our core we focus on tactile building, but AR presents opportunities to enhance physical LEGO play with new action and mastery elements. We’re breaking the mold of gaming-first AR play experiences to create a new type of play where the physical world actually influences the AR layer, instead of the other way around.”

LEGO Hidden Side building sets deliver everything kids love and expect from a LEGO building experience – the challenge of the build, a detailed model with functionality, and minifigure characters set in a story-driven universe. Each model can be built as it appears by day – a school house, bus, or graveyard, for example – and has transforming functionality to become the haunted version of itself.

The app lets kids assume a first-person perspective to join lead characters, Jack and Parker, as they explore their hometown of Newbury, using their mobile phones to see and solve paranormal mysteries beneath the surface of their environment. Game play prompts kids to hold their phone up to the physical LEGO models and interact with various elements, or “points of possession,” which release virtual ghosts that kids must then capture in the AR game to stop the haunting. Numerous scenarios create dynamic gameplay that requires kids to keep one hand in each world to progress the play.

physical models, creating a deeply engaging reciprocal play experience in two worlds that has never been seen before.”

The app also consists of a short digital game that kids can play independent of the building set.

LEGO Hidden Side marks the first time the company introduces one of its play themes as a service. After launch, the app experience will continue to expand with the addition of new ghosts, new game challenges, and randomization of gameplay so the experience is different every time kids play.

Donaldson noted, “We’re leveraging some of the best elements of mobile games to keep the experience fresh, encouraging kids to return to their LEGO sets time and again to see what is different. With the thoughtful integration of LEGO building and AR technology, we can deliver a truly innovative play experience that taps into the everchanging landscape of fluid play, where children constantly find new moments and forms of play.”

LEGO Hidden Side will be available globally in late summer 2019. Physical sets will range in price from $19.99 to $129.99 (USD). The LEGO Hidden Side app will be a free download from the App Store and Google Play.