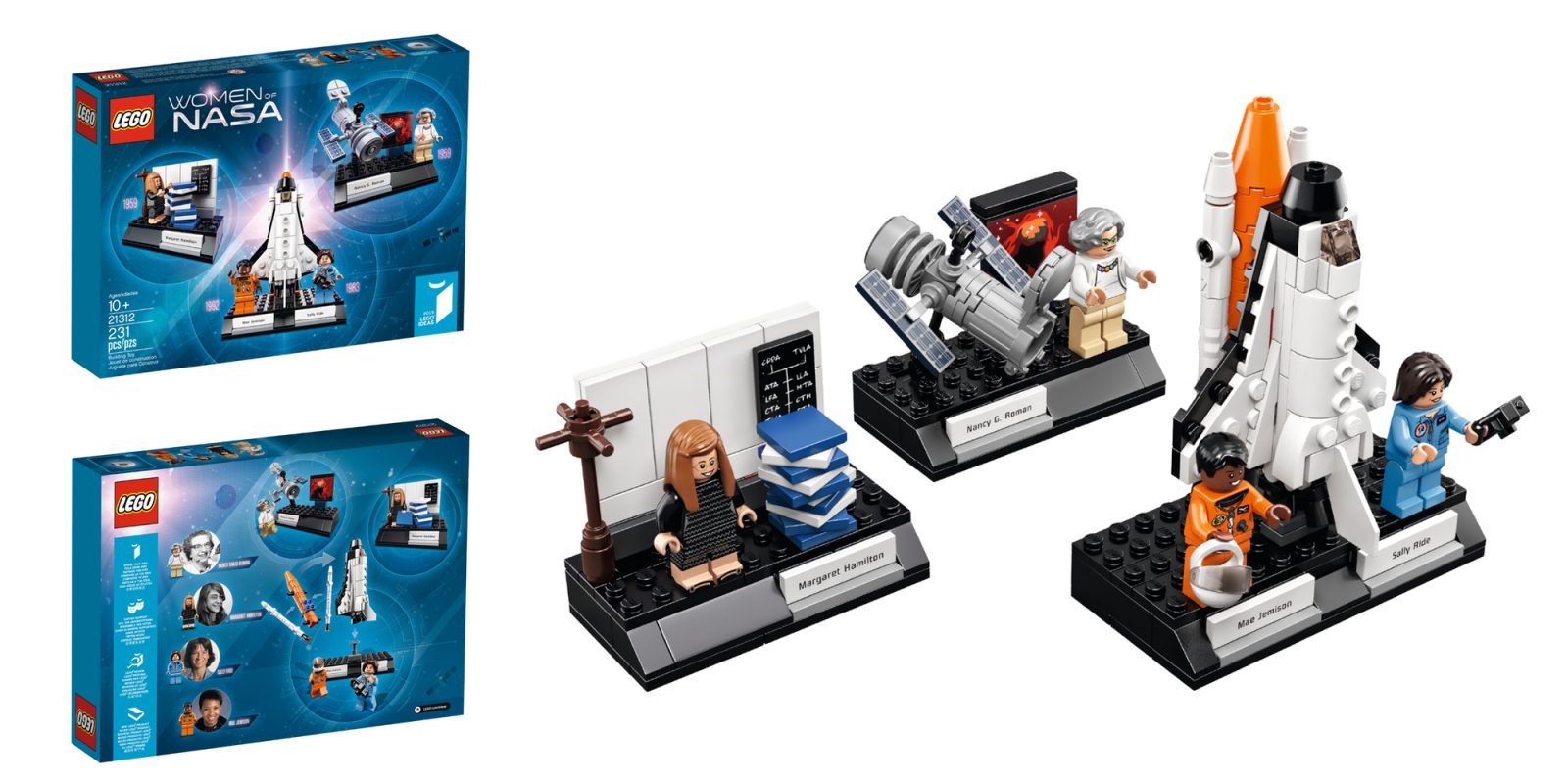 Update 11/1: The set is now available for $24.99 Prime shipped from Amazon, the LEGO store and more.

On the tail end of new Star Wars sets from earlier in the month, LEGO is keeping the new kits coming by offering some more details on a highly anticipated model. Backed by LEGO Ideas, the Women of NASA set is finally ready for a public release. Complete with 231 pieces, 4 minifigures and 3 dioramas, the set looks to be a great way to get kids interested in space from an early age.

The latest kit out of LEGO Ideas revolves around 3 different miniature dioramas which all illustrate varying areas of expertise pioneered by women within NASA. Comprised of 231 pieces, these builds include scale recreations of the space shuttle and Hubble Telescope, a chalk board full of scientific information, imagery of stars and more. Each of the vignettes also feature printed name tags to correspond with women who impacted the project.

But the set wouldn’t be called the Women of NASA without minifigure renditions of the scientists, engineers and programmers who made these feats possible. That’s why the kit includes 4 different figures of iconic and influential individuals in space exploration history; Nancy Grace Roman, Margaret Hamilton, Sally Ride and Mae Jemison.

The coolest model within the build definitely looks to be the micro Space Shuttle Challenger. Measuring over 4-inches tall, this section of the kit features Sally Ride and Mae Jemison alongside the shuttle’s 3 removable rocket stages. The 2 minifigures and rocket are mounted on a display base that adorns both individual’s names, just like the other builds.

Not far behind is a posable Hubble Space Telescope recreation that features what is said to be an authentic level of detail. This build stacks up to over 2-inches tall and also includes Nancy Grace Roman’s brick-built figure along with a projected image of a planetary nebula.

Last but not least, Margaret Hamilton’s build is based around her contributions to developing the Apollo Guidance Computer, the onboard flight software responsible for getting men on the moon in the late 1960’s. Accompanying the programmer’s minifigure you’ll find a stack of book elements to represent the software’s source code.

This time around, LEGO Ideas has opted to release a more affordable kit, with the Women of NASA set retailing for just $25. The build will be a great way for fans wanting to pay tribute to the accomplishments of women throughout NASA’s history. Younger fans will love the set as well, as it’s the perfect way to role-play space exploration missions, all while gaining an interest in STEM. The Women of NASA set will be available starting on November 1st, so those wanting to get their hands on the set won’t have too long to wait.

Build, play and learn from inspiring women of NASA!

Explore the professions of some of the groundbreaking women in science, technology, engineering and mathematics (STEM) with the LEGO® Ideas Women of NASA set. It features minifigures of 4 pioneering women of NASA— astronomer and educator Nancy Grace Roman, computer scientist and entrepreneur Margaret Hamilton, astronaut, physicist and entrepreneur Sally Ride and astronaut, physician and engineer Mae Jemison—and 3 builds illustrating their areas of expertise. Role-play space exploration from planning to moon landing, beginning with the iconic scene from Massachusetts Institute of Technology in 1969 of Hamilton with software that she and her team programmed. Build the posable Hubble Space Telescope and launch a LEGO version of the Space Shuttle Challenger with 3 removable rocket stages. The set also includes a booklet about the 4 featured women of NASA, and the fan creator and LEGO designers of this fun and educational set.