Synology DS1019+ NAS Review: Media and smart home server that’s in a class all its own 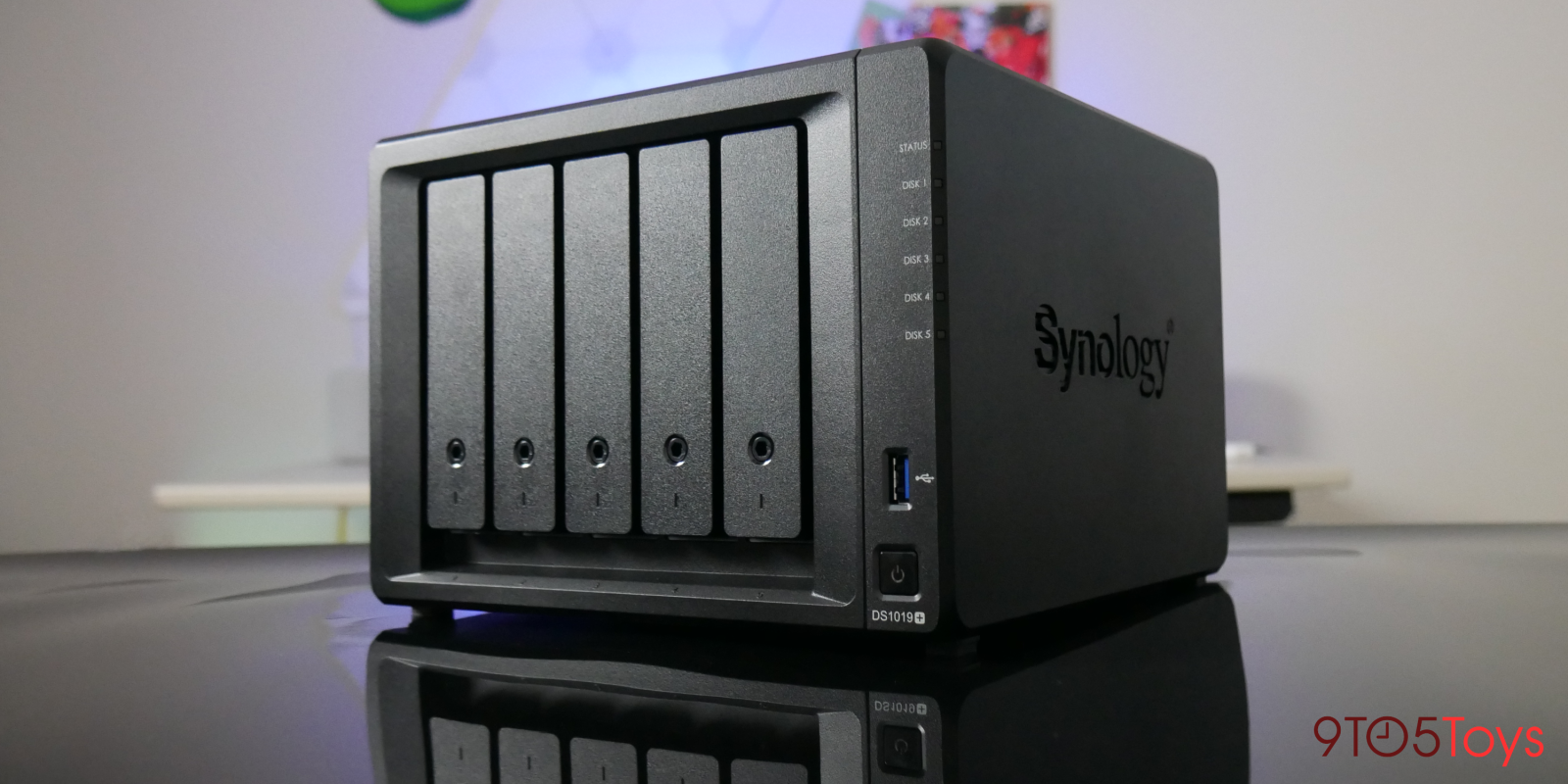 In late February, Synology debuted its latest NAS, the DS1019+. As one of the company’s higher-end options, it boasts a plethora of prosumer features and notable specifications. But starting at $550, the question is, is the storage solution worthy of its more premium price tag? Today we’ll be taking a look at how it handles everything from 4K video transcoding with Plex to running smart home controller software and more. Head below for a full report.

The latest in Synology’s lineup of NAS enters as the DS1019+, a five-bay model wielding a long list of noteworthy specs. Based around a quad-core 1.5Ghz Intel processor, this NAS can support up to 70TB worth of storage.

I/O on the DS1019+ is pretty standard for its price point in Synology’s NAS lineup. On the front you’ll find a single USB 3.0 port. Heading to the back brings two Gigabit Ethernet, a second USB 3.0, and eSATA ports. Those are joined by the power input and a Kensington security lock. 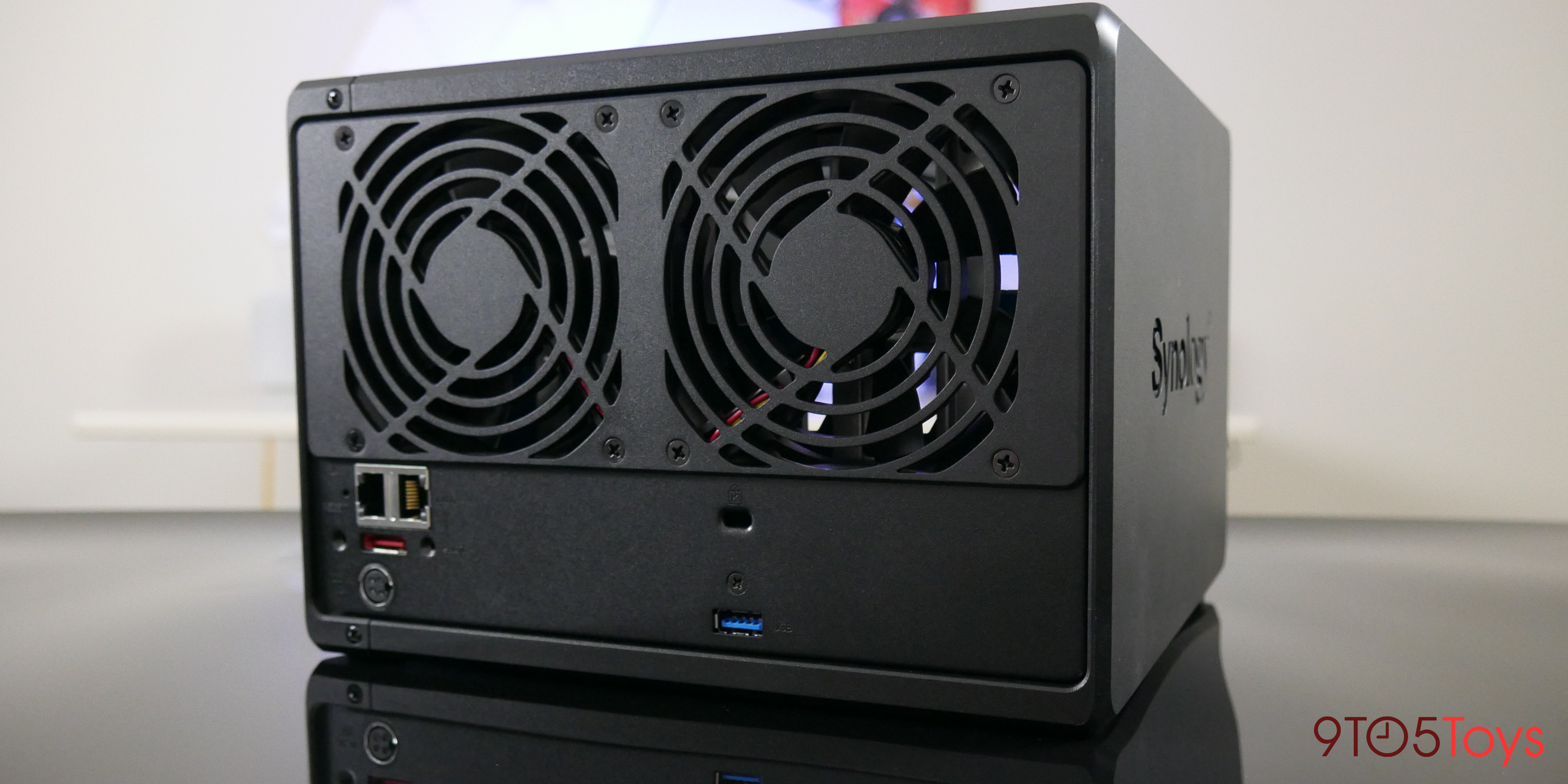 Something we touched on when we reviewed the DS218play last month was how fantastic Synology’s graphical user interface was. It’s worth noting again here just how much its software improves the overall experience compared to other NAS units on the market. Power users may fall back to command line interfaces once setup – but if you’re looking to take advantage of all the power right out of the gate, Synology DMS is intuitive to navigate and easy to get things configured. 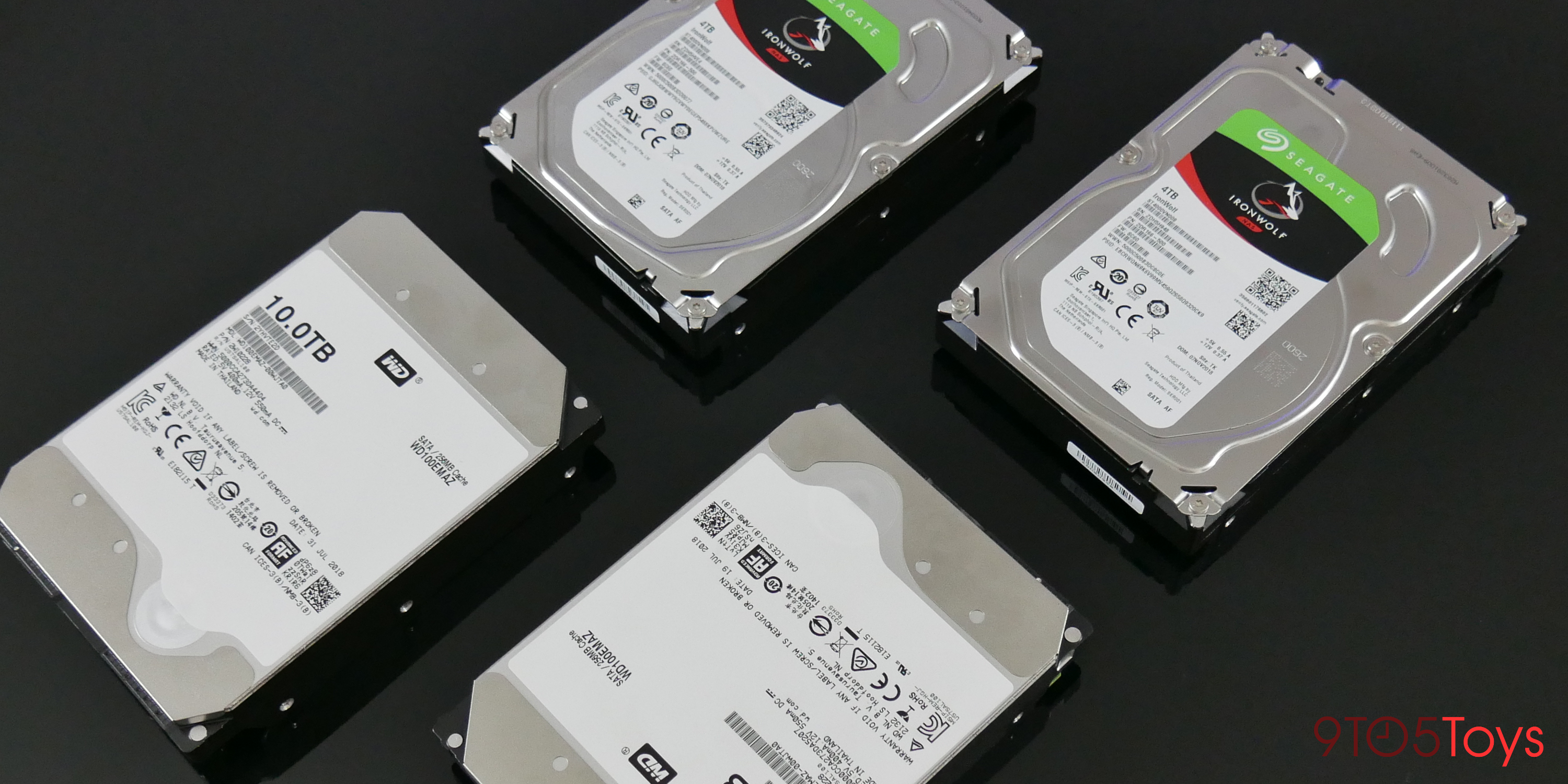 This time around for storage, I opted for Seagate’s NAS-ready IronWolf Hard Drives. The Synology DS1019+ NAS was configured with two 4TB models for most of the testing. Then I threw three WD White 10TB drives (re-packaged WD Red) into the mix to bolster the storage pool. The IronWolf drives are impressive options at their price, and that’s coming from someone who’s been loyal to WD for a long time. 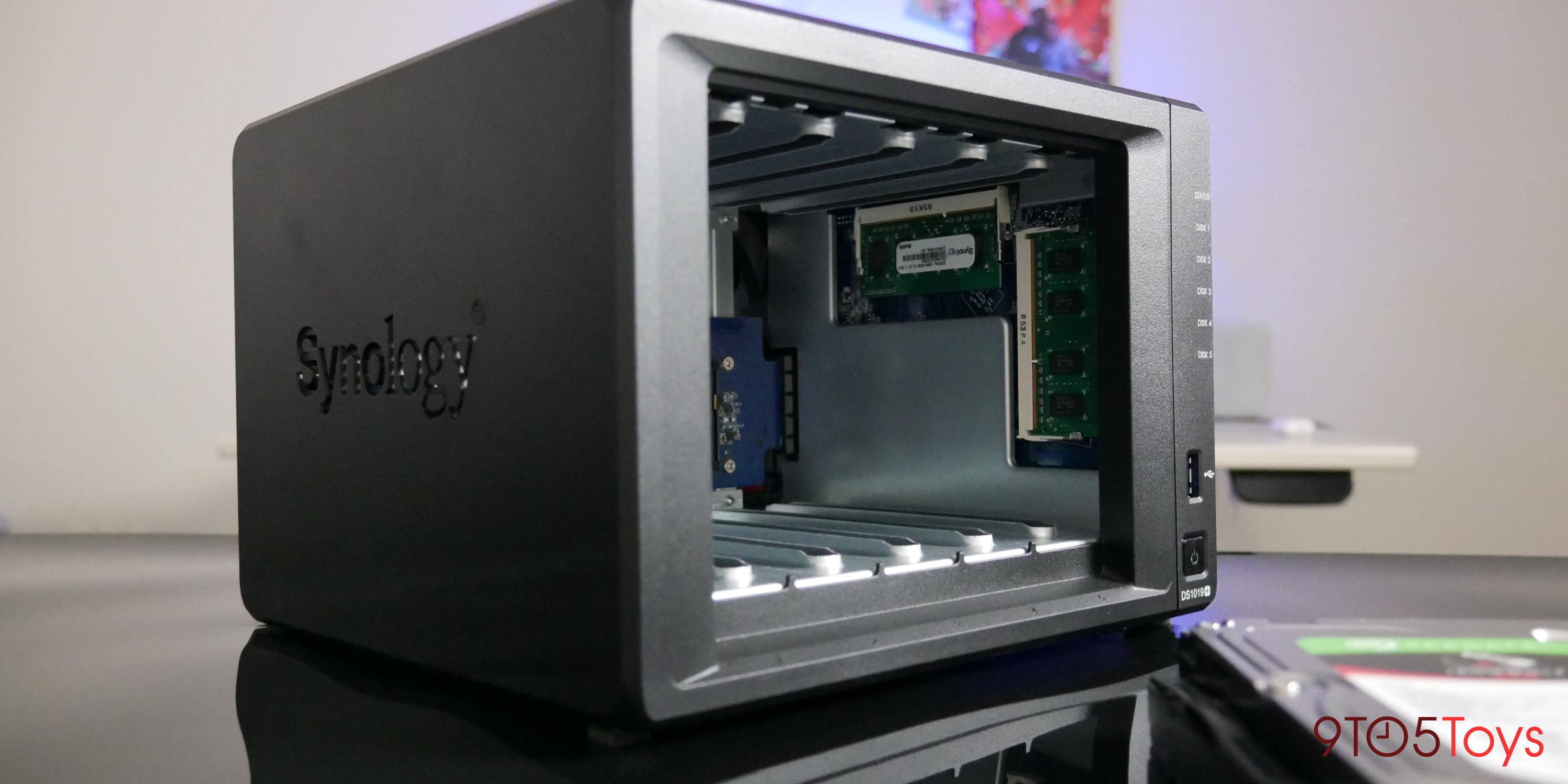 Passing the threshold into the realm of high-end models brings some notable features to the DS1019+ NAS. Upgradability is a big one, with the option to easily swap out RAM making a great impression. It initially comes loaded with 4GB of DDR3 memory, though up to 8GB is supported. 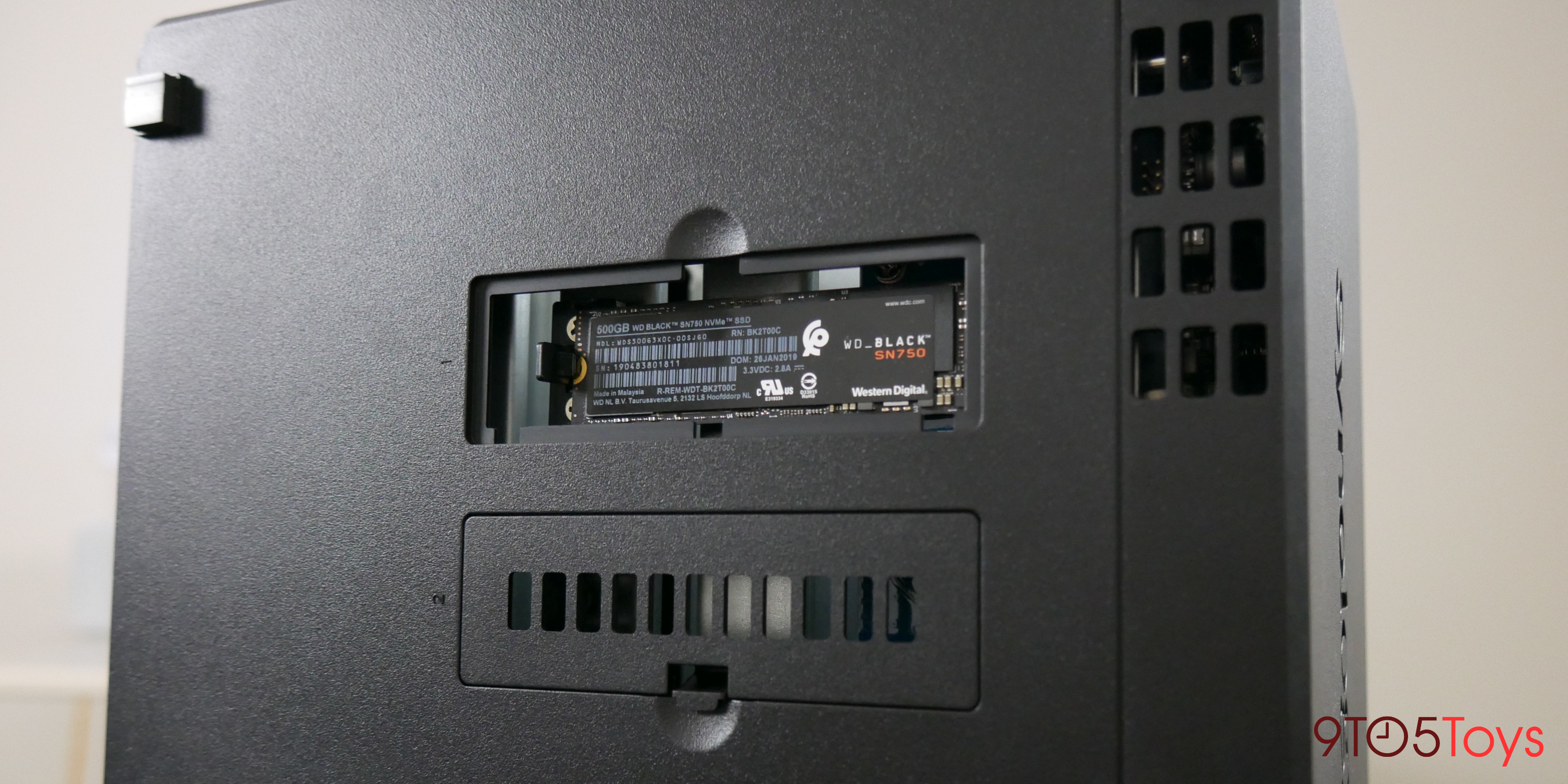 Another big perk is dedicated space for Synology’s SSD Cache feature. In what can effectively be thought of as a Fusion Drive for your bulk storage, it significantly speeds up read and write times. The plus here is that while any Synology NAS can take advantage of this feature by sacrificing a hard drive bay, the DS1019+ NAS features two NVMe SSD slots.

SSD Cache provides a notable boost in file transfers, and strategically moves data over to the SSD that are repeatedly accessed. So when a new episode of a show hits my Plex server, the file will likely be moved to the cache after the first person watches it. Then any subsequent plays will enjoy the benefit of faster load times. 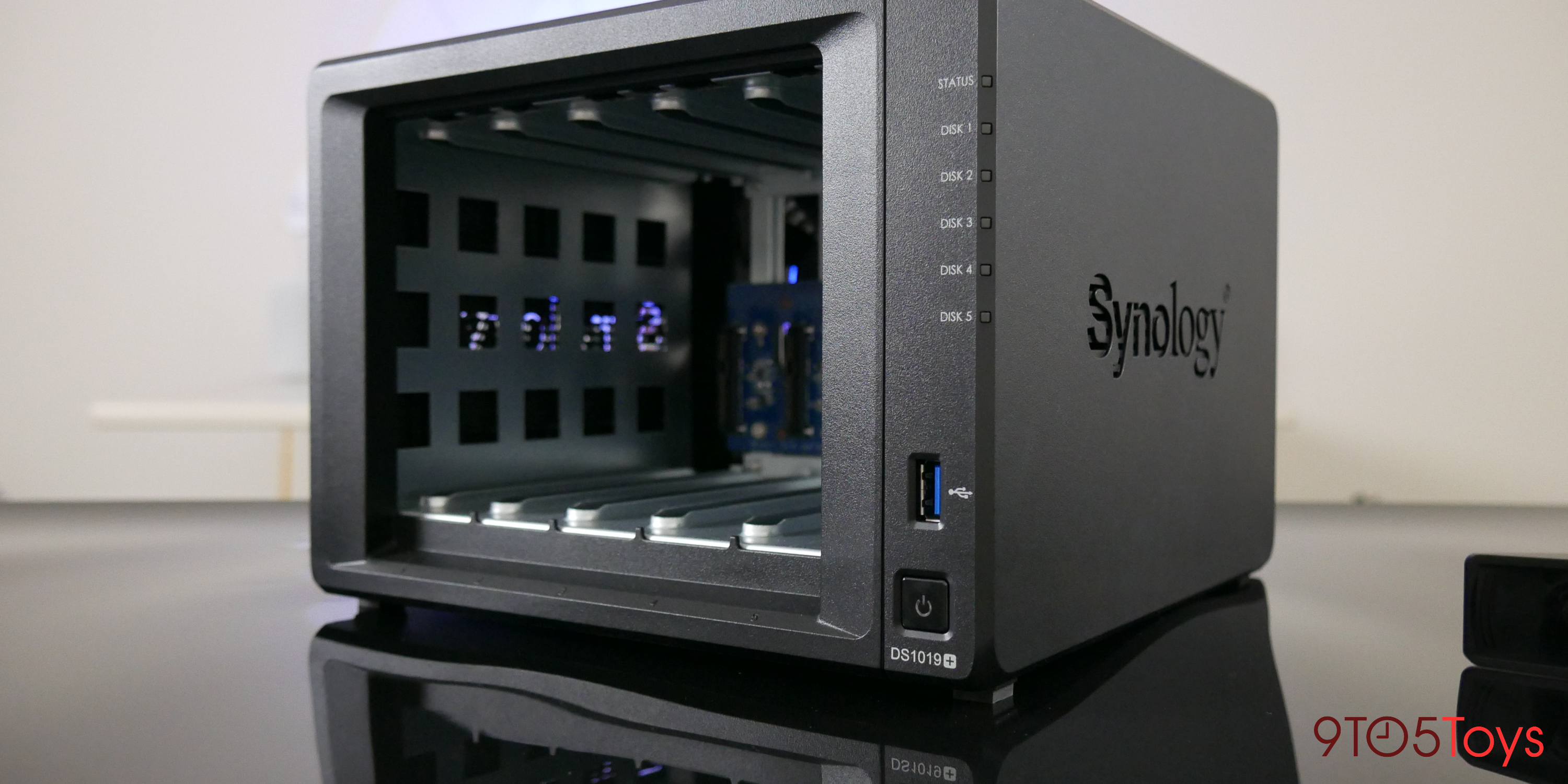 Storage-wise, five hard drive bays provide ample space. Though the odd number of drives limits your raid type, but that’s only an issue if you’re looking for a specific level of redundancy. I opted for Synology’s SHR format, which is essentially the default. But it’s still worth noting that RAID 10 and other options will either be unsupported or inefficient.

Synology notes that the DS1019+ NAS is capable 225MBps transfer speeds thanks to its Gigabit Ethernet ports. In actual testing, I’ve found that’s closer to 150MBps for sequential reading and writing. That’s about what I’d expect, and in line with past usage of other NAS.

One of the first things I did when unboxing the DS1019+ NAS was spin up Plex. The initial software-based transcoding tests saw the NAS handle two concurrent 4K streams without issue. That alone was enough to sell me on its capabilities. But I enabled hardware transcoding, a Plex Pass feature, and it really unchained the beast, so to speak. Five concurrent 4K streams where thrown at the NAS, and in turn, the DS1019+ churned out smooth, buffer-less playback. 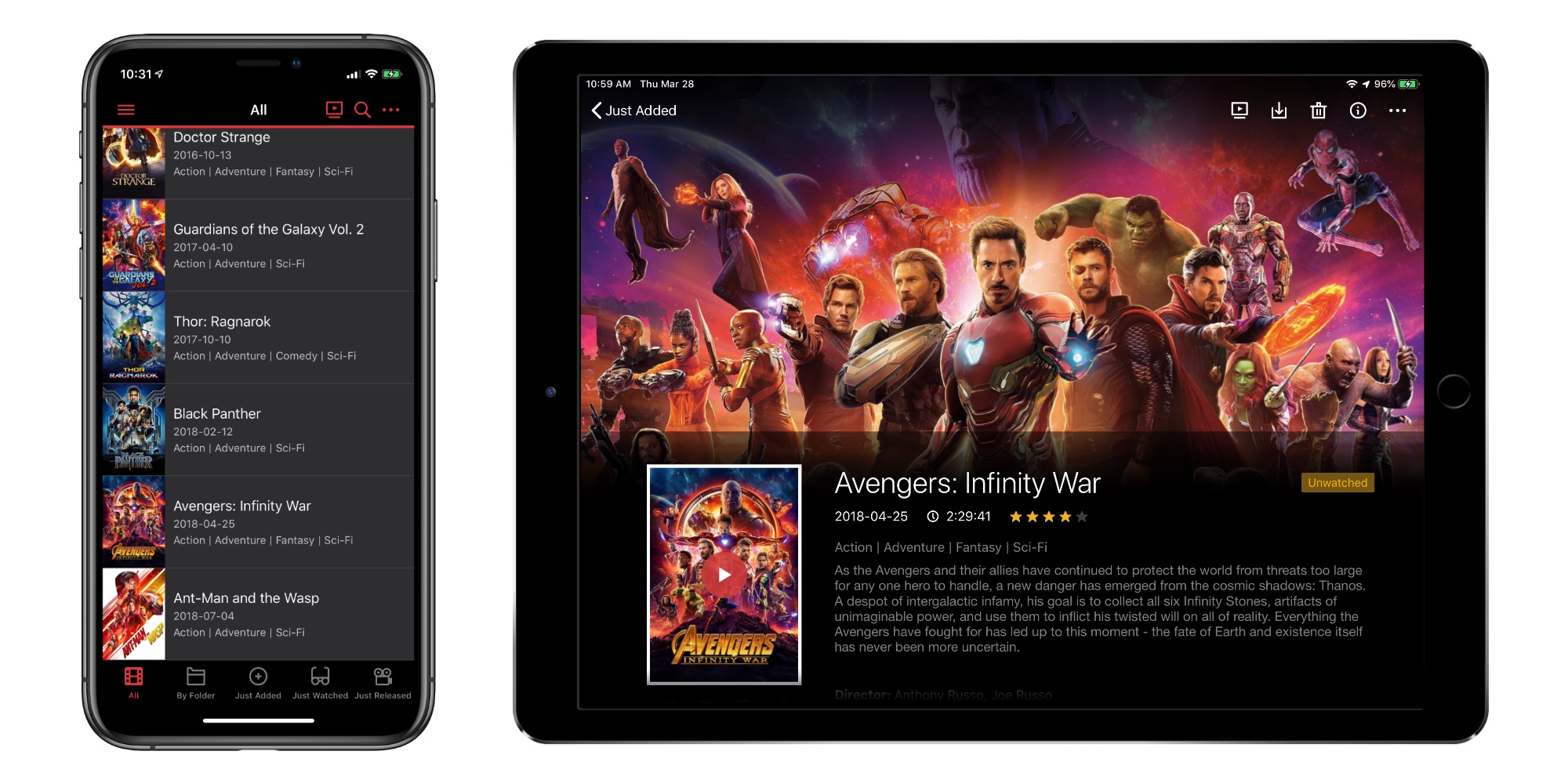 Synology also has its own suite of media apps which can be run on the DS1019+. If Plex seems like overkill, the DS Video software offers a more lightweight, yet solid way to enjoy content. It even has an Apple TV app, alongside iOS and Android.

I’ve also thrown pretty much all of my smart home’s software onto the NAS. From Home Assistant and HomeBridge to Docker, Tautulli and more, the DS1019+ has had no trouble keeping up. The included 8GB of RAM really makes the difference compared to lower-end models and ensures that it is more than capable enough to handle all of the everyday process that run on my server. 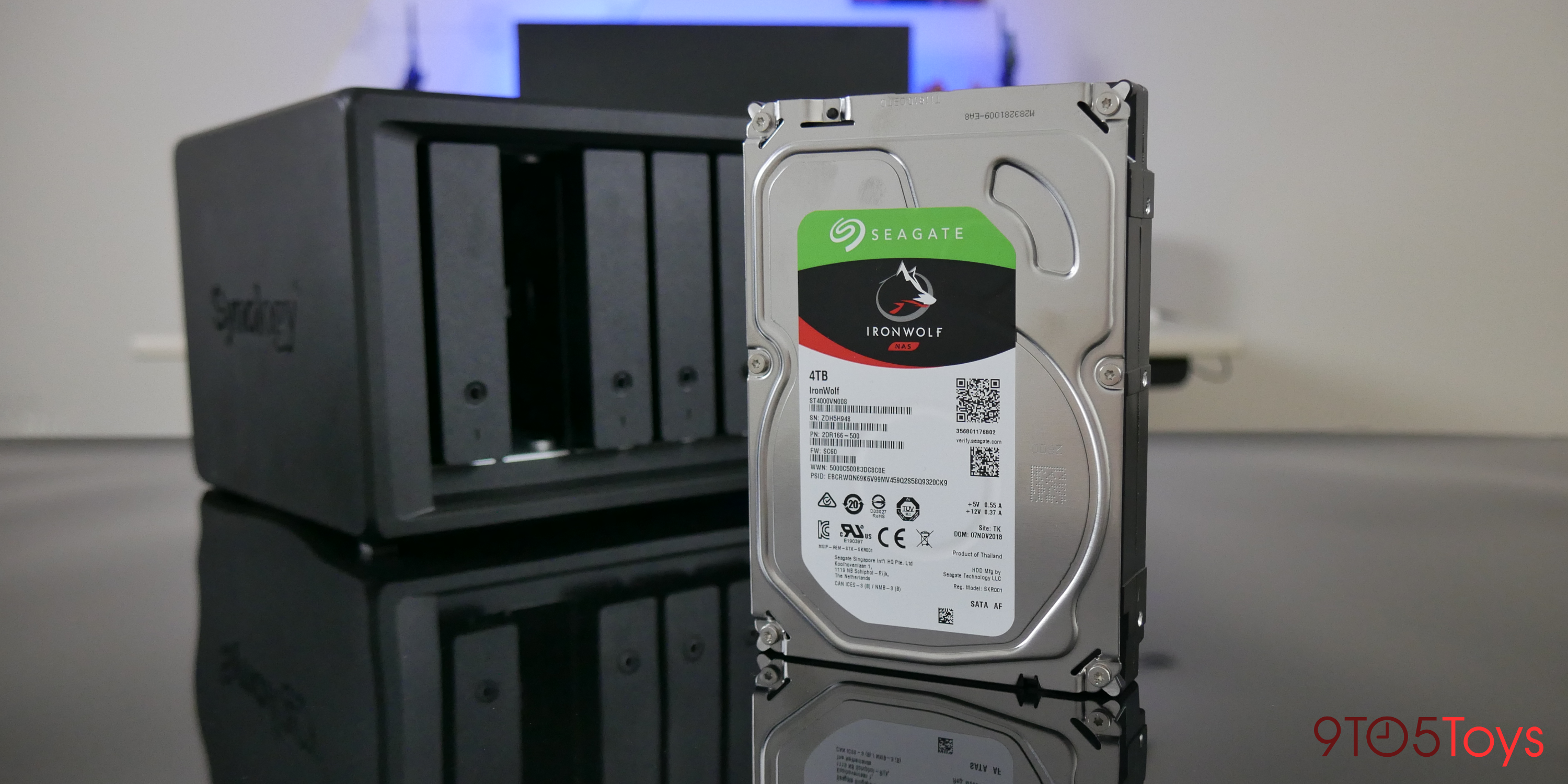 Impressive specs and a wide range of compatibility make the Synology DS1019+ NAS an all-in-one server that’s more than well-equipped to handle a sizable amount, if not all of my smart home and media server needs. The dedicated NVMe storage was something I never knew I wanted. But being able to take advantage of the SSD cache feature like this is sure to be a must going forward.

At its price, you get a lot of bang for your buck. In terms of usage in my own personal setup, it easily goes toe-to-toe with Apple’s latest top of the line Mac mini; a machine I bought in the fall to use as my main media server.

The only thing really holding back the DS1019+ NAS is a lack of 10GB Ethernet. Other options in Synology’s lineup feature upgradeable Network Interface Cards. But unfortunately that’s missing from this release as well. Relying on standard Gigabit Ethernet is the biggest bottleneck in the equation. Though at the end of the day, this doesn’t hold the NAS back that much, at least not when handling my use cases.

Starting at $550 for the entry-level configuration, Synology’s DS1019+ NAS is a bargain when you consider everything it can handle. So if you’re in the market for a NAS of this caliber, I doubt you can go wrong with the company’s latest. Plus with World Backup Day around the corner, there’s never been a better time to start contemplating your own storage needs.