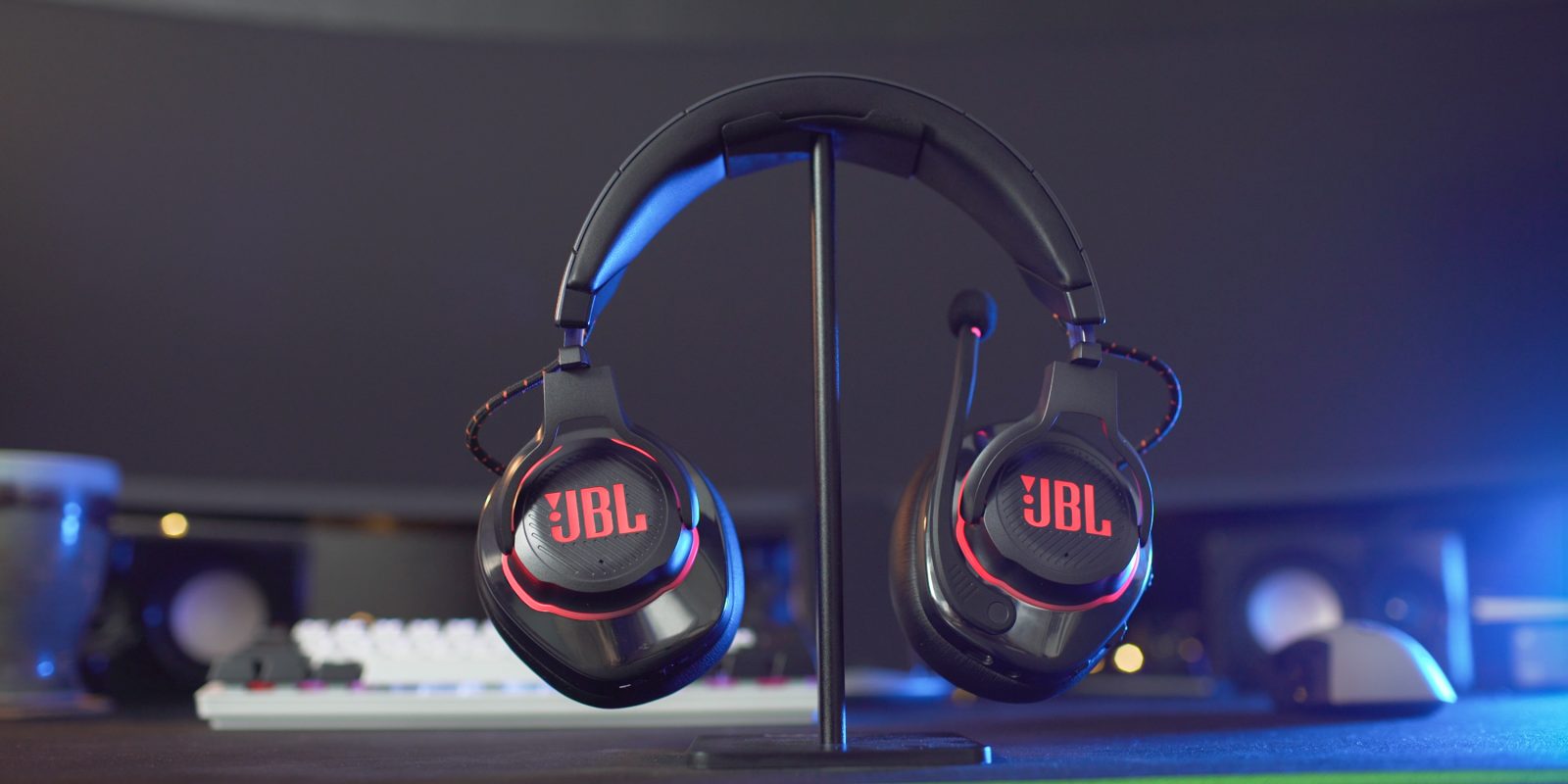 While JBL is an established name in audio, you might be surprised to hear that they’ve now stepped into the gaming world with their line of Quantum gaming headsets. Ranging from the $39.99 Quantum 100 to the $299.95 head-tracking Quantum ONE, JBL has put together an impressive lineup. We’ve spent some time with their penultimate gaming headset, the JBL Quantum 800. With ANC, 2.4GHz wireless, Bluetooth, and RGB, it’s packed with features for the $199.99 price. Head below to watch the video and check it out.

Looking at these headphones, it’s obvious what they are intended for. If the microphone wasn’t as large, they might find a home as a pair of DJ cans with their impressive RGB, but add in the microphone and the Quantum 800 fully embodies its gaming focus.

Weighing in around 410g, they are quite a bit heavier than the last gaming headset we checked out, the Blackshark V2, which comes in around 260g. But the headband is large with soft cushioning, and the large ear cups easily fit around my ears with their leather-wrapped memory foam padding. I never found this headset to be uncomfortable, even after wearing it for multiple hours.

On the left ear cup we have the microphone that mutes with an audible and tactile click when raised, and most of the controls. From top to bottom we have controls for ANC, game vs. chat volume, overall volume, a physical mic mute button, 3.5mm jack, and USB-C port. On the right can are the power switch and Bluetooth button. 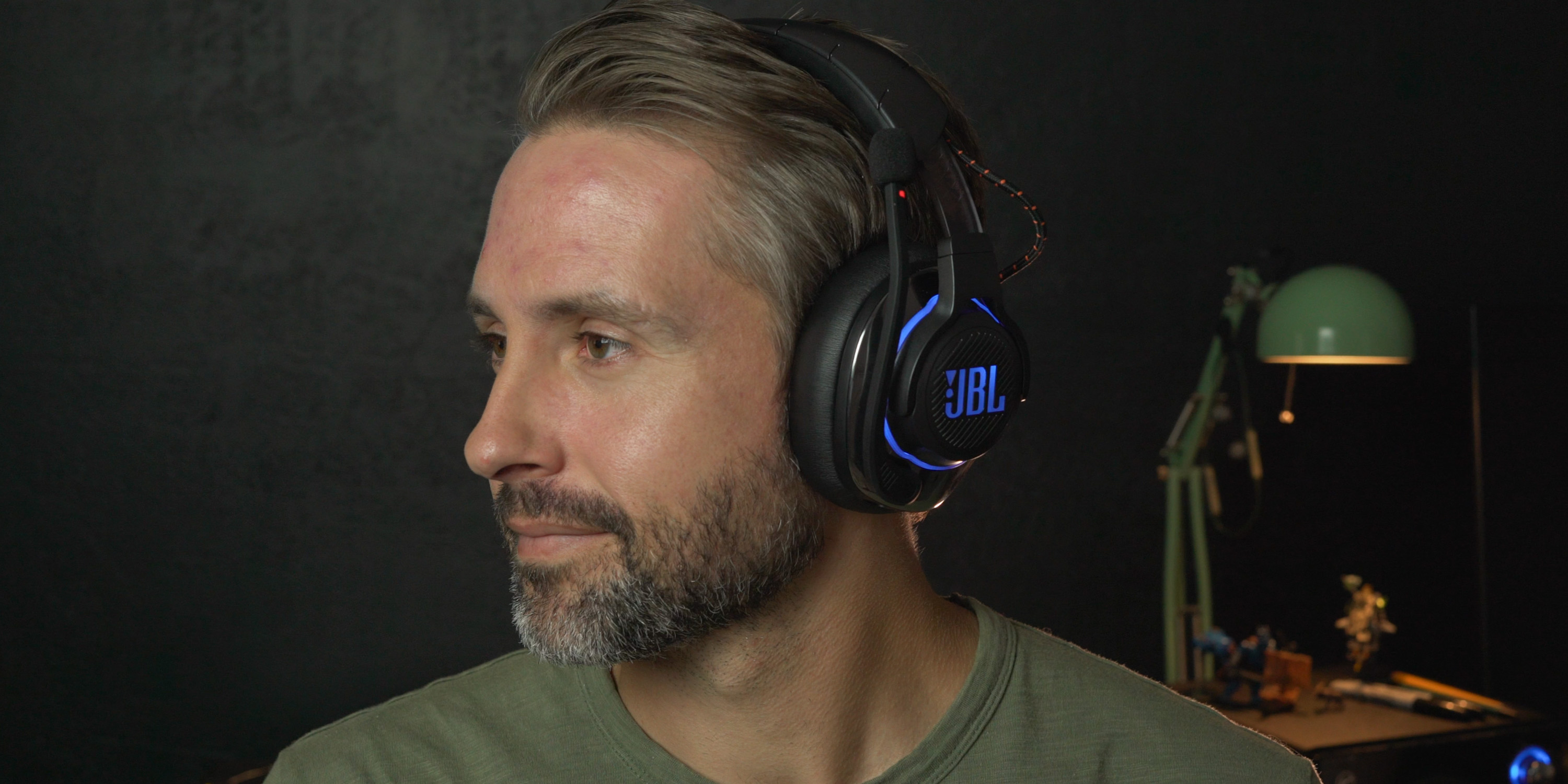 Equipped with 2.4GHz wireless and Bluetooth 5.0, the JBL Quantum 800 is a very convenient pair of headphones. Beyond that, you can also use the passive 3.5mm connection at the same time to get audio from three sources simultaneously if you need that.

One of the headlining features of the Quantum 800 is active noise canceling. The ANC is easy to toggle on or off with the button at the top of the left can. There is a nice voice prompt that lets you know the status so you aren’t guessing whether it’s on or off.

When turned on, the ANC works great. It really helps to knock out room noise and keep the focus on the sound coming out of the headphones. I’ve been using these quite a bit when working and not just gaming to help focus on writing or editing.

While not the most impressive battery life figure for a wireless gaming headset, 14 hours should get you through most gaming or working sessions. I did find that with lighting turned on, it seemed to drain even faster than that, so keep that in mind.

Unfortunately, I also couldn’t figure out a way to use the headphones while charging. Every time I would plug the USB-C cable in, it would lose connection to my computer. You can forgo the active connection and use the included 3.5mm cable to use the headset, but then you’ll lose the benefits of ANC and the JBL Quantum Engine app. 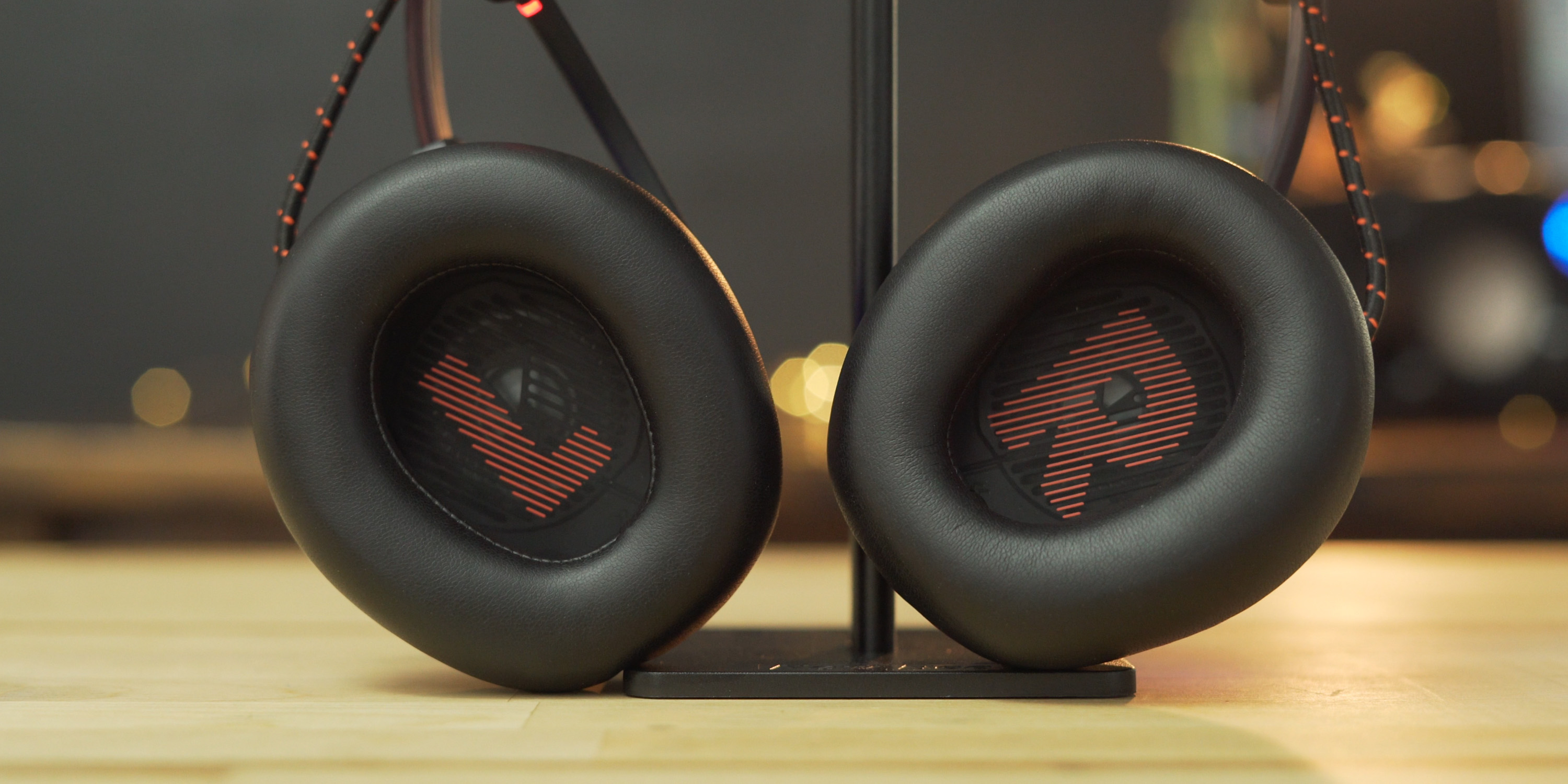 Even in their default flat sound profile, the JBL Quantum 800 headphones sound great. When wireless, the frequency response goes from 20-20,000 Hz, and they hit low with a full sound, thanks to the 50mm drivers. Explosions in Escape from Tarkov have plenty of presence while I could still pick out footsteps and other audio cues for enemy positions.

Beyond flat, there are pre-built EQ settings for bass cut and boost, high-end boost, and a setting for long-listening sessions. 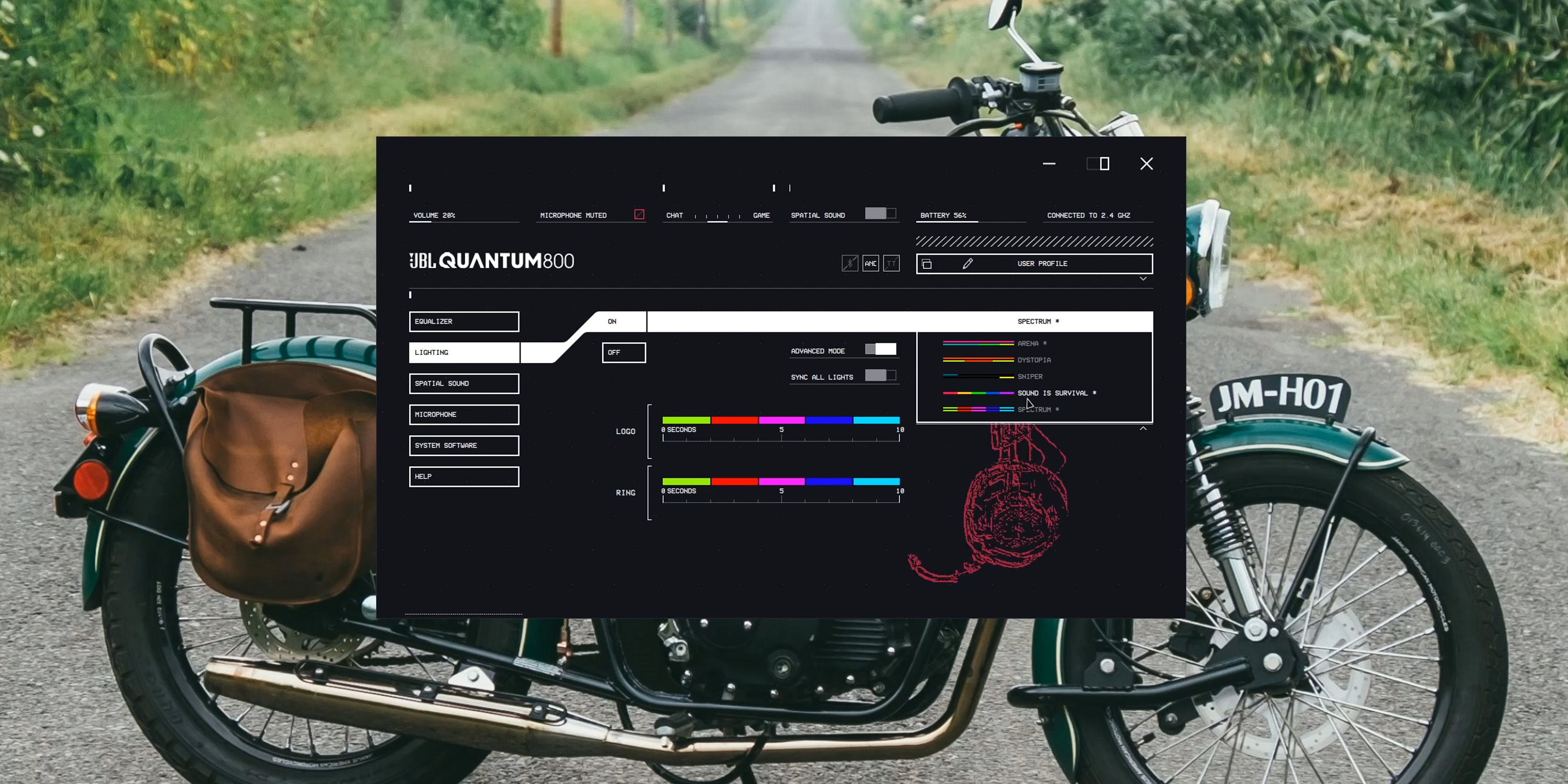 To help control everything even beyond EQ, the JBL QuantumENGINE can also tweak surround sound modes, lighting settings, and give a status update for battery life. Across the top are some quick stats like volume level, and on the left are the different menus for customizing the headset. Be sure to watch the video for a full walkthrough of the JBL QuantumENIGINE app.

For lighting, there are separate RGB zones for the logo and ring. There are a few built-in presets, or you can build your own.

Under spatial sound, there are options for JBL QuantumSURROUND or DTS. Besides Razer’s THX Spatial Audio that came out with the Blackshark V2 recently, I’m not the biggest fan of virtual surround modes. I tried it on the Quantum 800 but usually ended up turning it off when playing Escape from Tarkov. 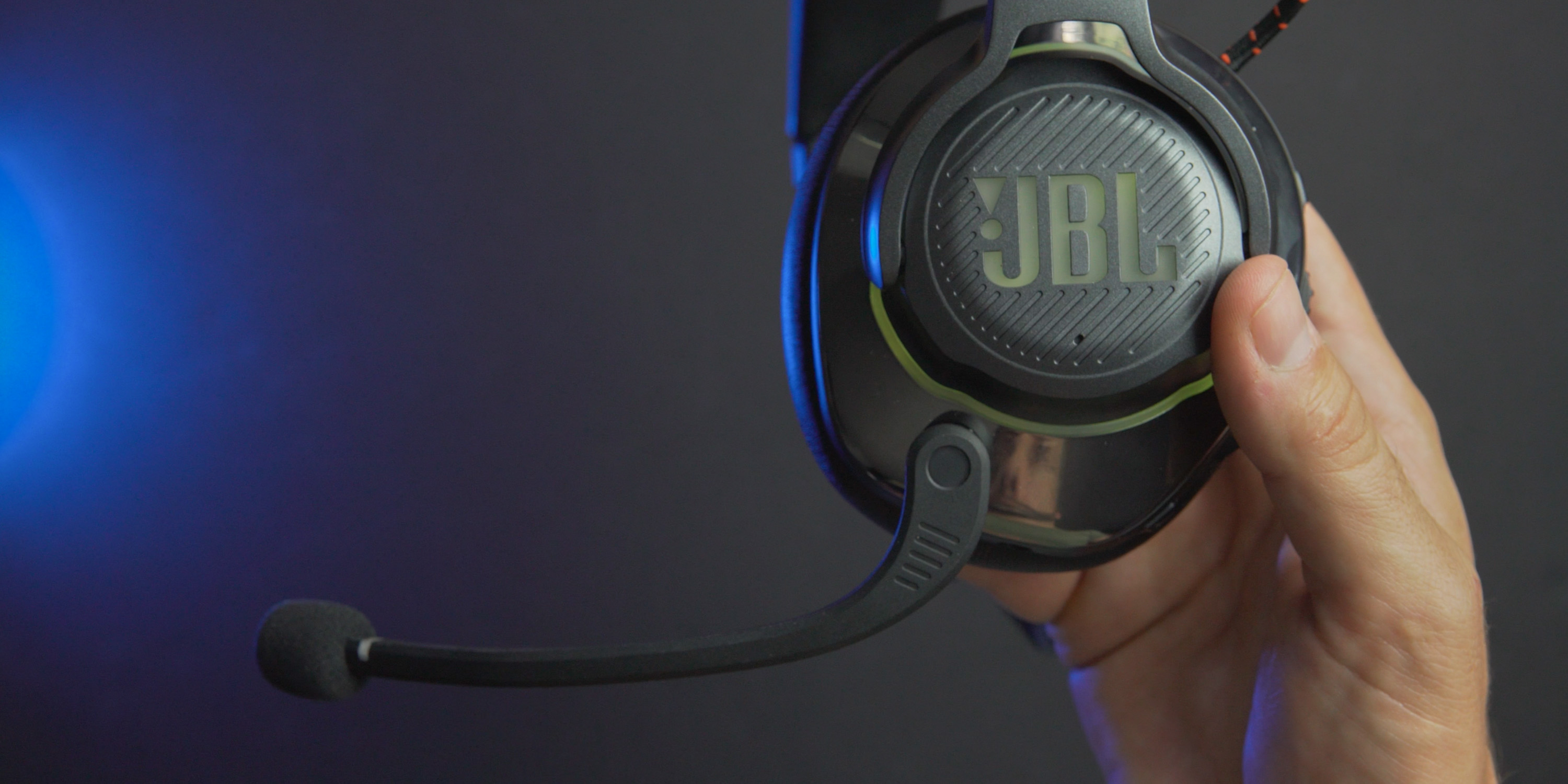 The microphone sounds pretty decent as well. While it is still focused on clarity, it isn’t as thin as a lot of gaming headsets. It did a decent job of knocking out the keyboard noise from my clickiest keyboard, the Razer Huntsman Mini, with purple optical switches. Again, watch the video to hear how the mic sounds in use.

Overall, I’ve been super happy with the JBL Quantum 800 headset. It’s spent more time on my head than any other pair of headphones since I’ve gotten them. At just $199.99, they seem like a great deal to me, considering all of the features JBL has packed in for that price.