Behind the Screens: Blair’s Home Office and Standing Desk Setup 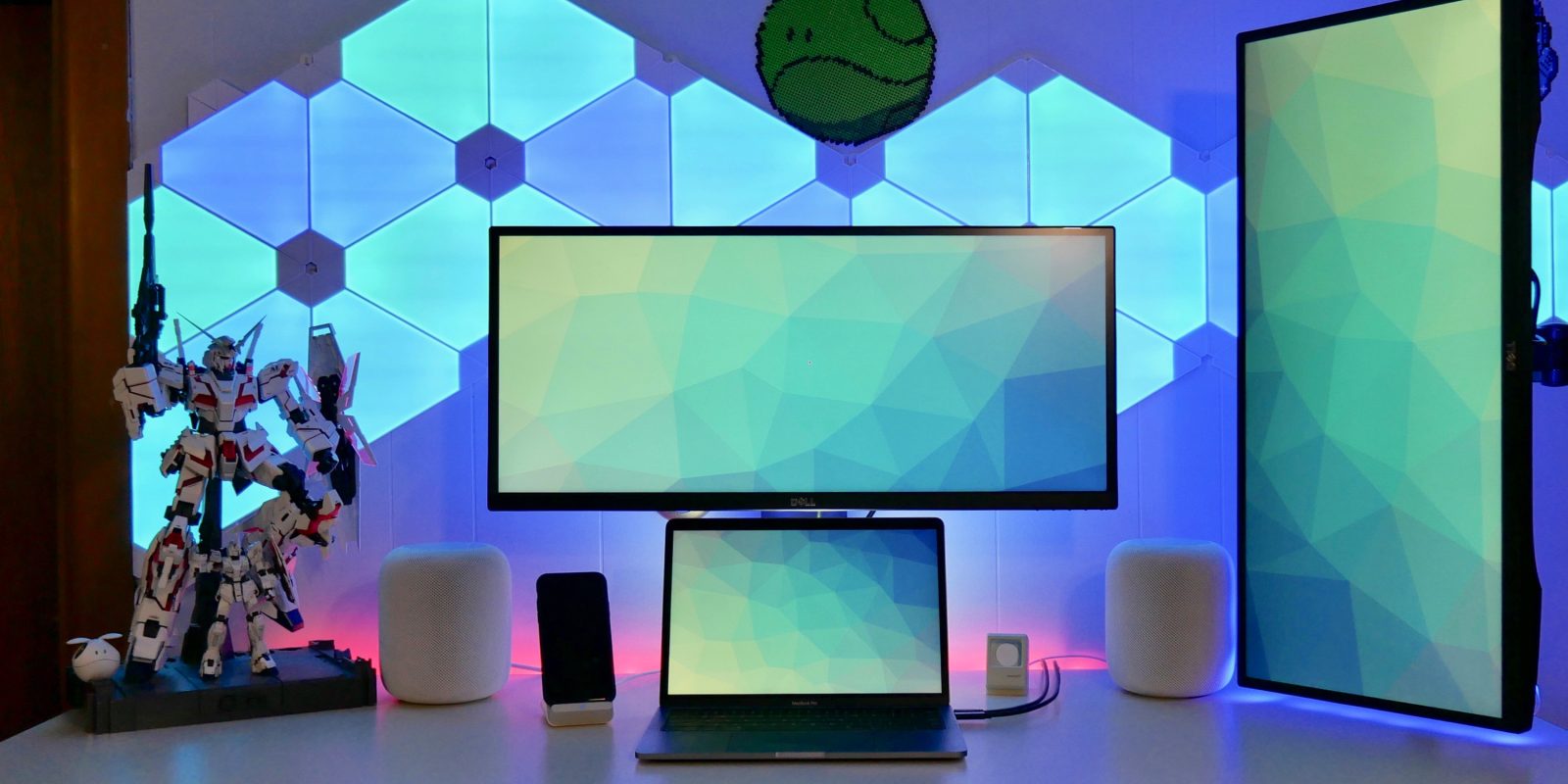 Behind the Screens is a new weekly 9to5Toys series that takes you through our writers’ setups, be it mobile, desktop, gaming or home theater. Next up is Blair Altland, a 9to5Toys editor.

Last time I checked in, my setup was a more humble workstation to fit the needs and constraints of student life. Since graduation, I’ve escaped the confines of my cozy dorm room, and have upgraded to a dedicated office complete with an all-new desk, monitor setup, speakers and more.

The last time around, I was rocking a more modest entry-level 2016 MacBook Pro. And with almost two years under its belt, it certainly served me well. But with the release of Apple’s latest 2018 lineup, it was time to upgrade to a machine that better fit my needs.

I’ve only had it for a few weeks, but so far, it’s just a better version of the computer that I’ve come to know and love. Even though the keyboard changes aren’t major, I find the new one preferable to type on. It’s a bit clicker and has a precise feel to it that I didn’t get from the previous iteration of the butterfly keyboard. Who knew a little silicone would make such a big difference. 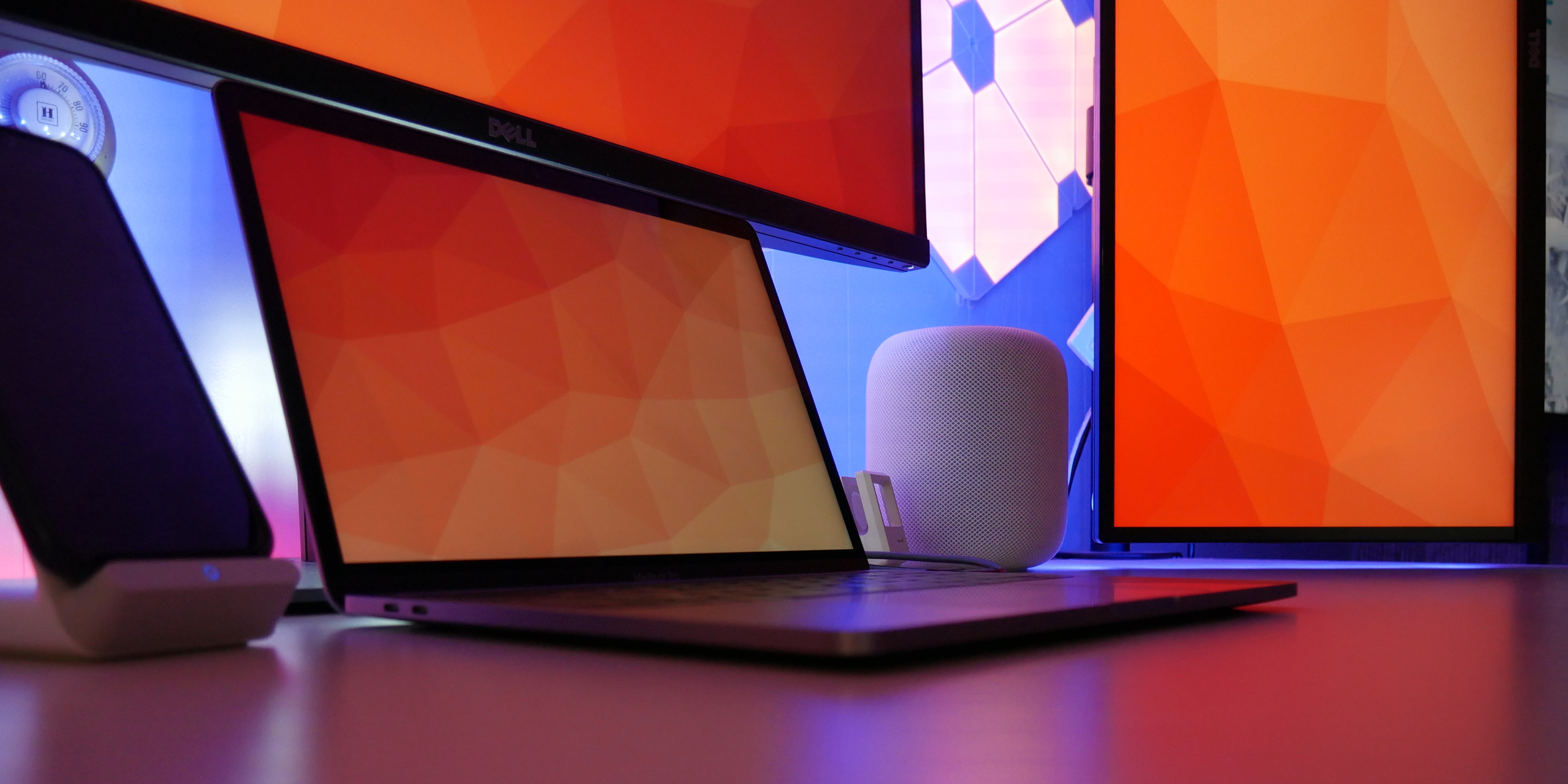 Moving from 8 to 16GB of RAM is just a treat and the processor spec-boost is definitely noticeable in day-to-day use as well. I’m still a huge fan of USB-C ports, which are pretty crucial for how I have everything configured. Overall, I’m a big fan of the computer and I’m glad I upgraded, simple as that.

I ended my last setup tour mentioning how the second I could, I’d “be picking up the biggest desk I can find.” Thankfully I’ve made good on my word, and my workstation is now centered around a 30 by 66-inch desktop. 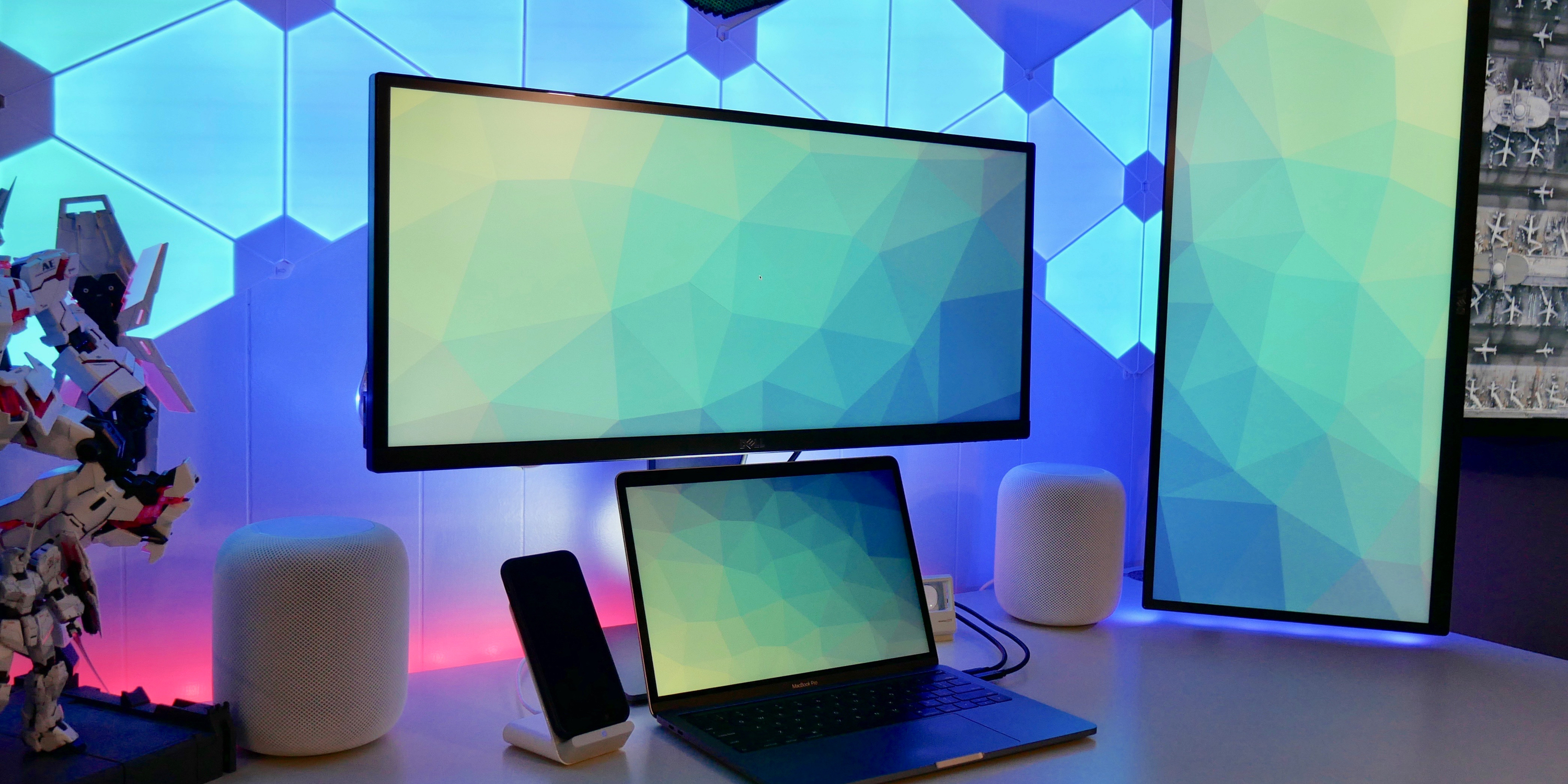 The base of my setup falls to the Monoprice motorized standing desk. It’s pretty silent, quickly converts from its sitting to standing configuration and has been as reliable as anyone could ask over the past few months.

Standing desks may be one of the new fads out there in the tech world, but I’m completely on board at this point. Stretching my legs every hour or so by standing up seriously has its perks. So if you’ve been debating upgrading to a standing desk, it’s hard not to recommend Monoprice’s option at its price point.

To go along with the desk I also have a thick rubber standing mat. If you have a standing desk and don’t have anything like this beneath your feet, do yourself a favor and pick one up. Trust me, it makes all the difference and it’s 100% worth it. 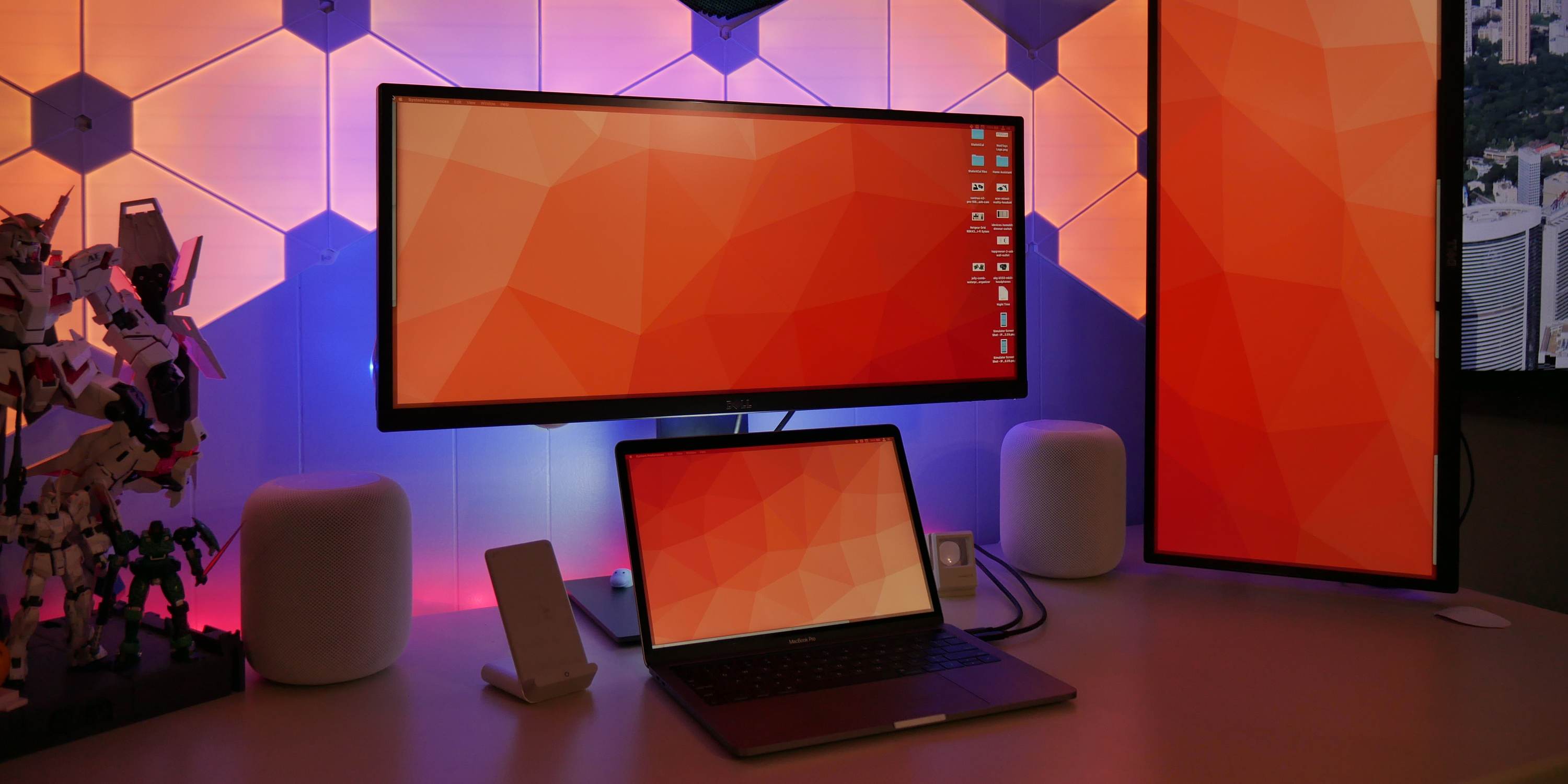 Perviously I was relying solely on a Dell U2917W Ultra Sharp 29-inch Monitor. Since then I’ve picked up another of the UltraWide that I have mounted vertically to the right of my main display. By day I use it almost extensively for keeping an eye on social media, mail, Slack and those kinds off things. After hours, it’s just phenomenal with Xcode. If you spend any significant amount of time pouring through lines of code, a vertical monitor is a game-changing experience and the way to go in my book. 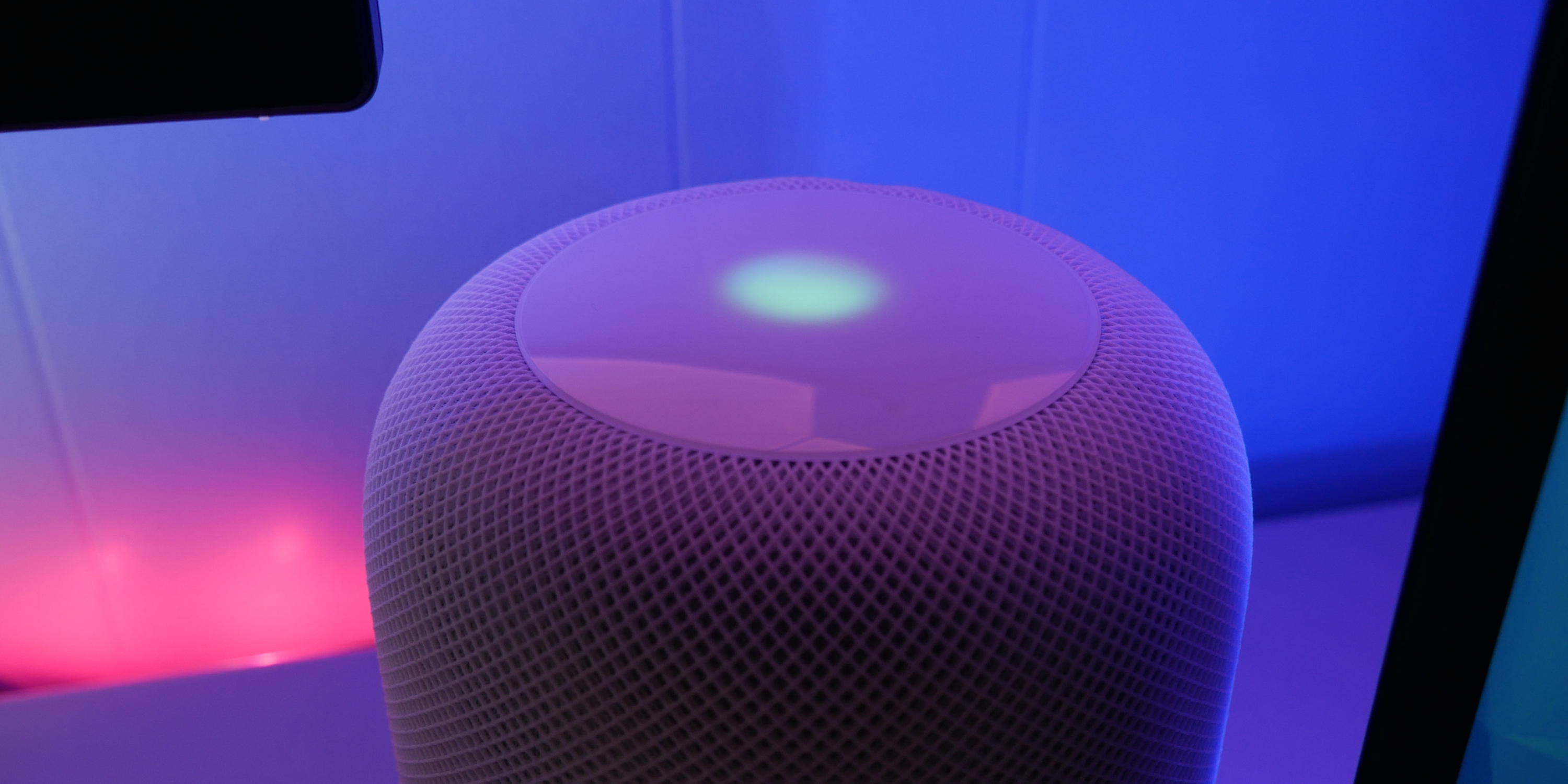 I began putting together my current workspace right around the same time Apple brought stereo support to the HomePod, making it pretty easy to decide which route I’d take for my audio preferences. So right now I’m rocking dual HomePods and for the most part, I’m thrilled. Sound quality is just as phenomenal as everyone says and despite its flaws, Siri gets the job done for me almost every time. The only downside is that I still can’t output audio from my Mac to the stereo pair, but in practice it’s almost never an issue. 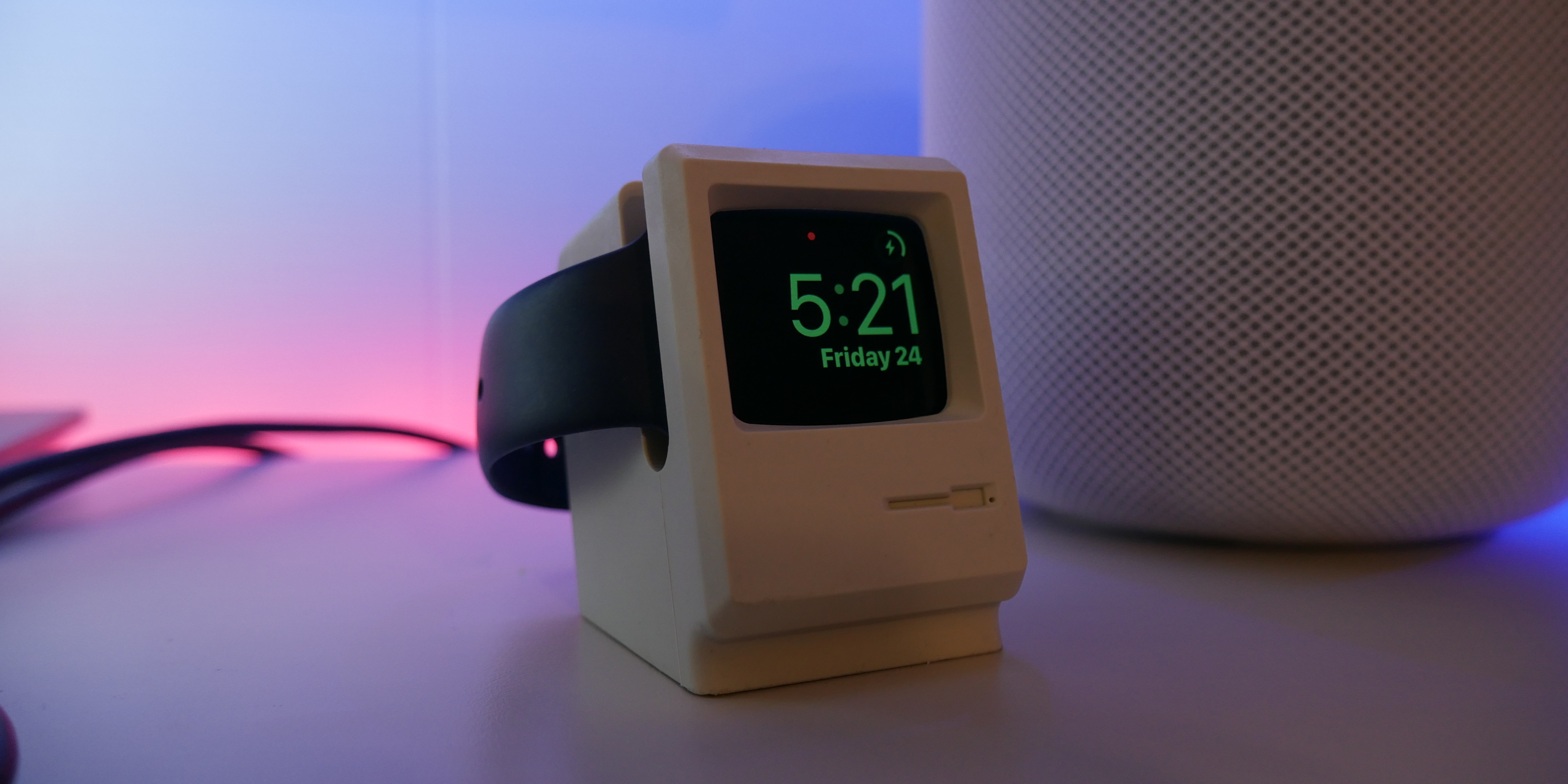 To go alongside my MacBook Pro, the main peripheral for my setup is a Belkin Thunderbolt 3 Hub, which I’ve mounted on the underside of the desk. It handles Ethernet, power and drives one of the displays, as well as any of the legacy USB-A connections I need. When it’s all said and done, it means I only have two cables extending from my Mac, which is just great.

Otherwise my desk isn’t too cluttered with gear, but I do have an Anker 7.5W Qi Charging Stand to the left of my MacBook. It lets my phone sit at just the right angle for Face ID to work pretty flawlessly and is as reliable as they come in terms of charging. And lastly, you’ll also spot the classic Mac elago Apple Watch dock. 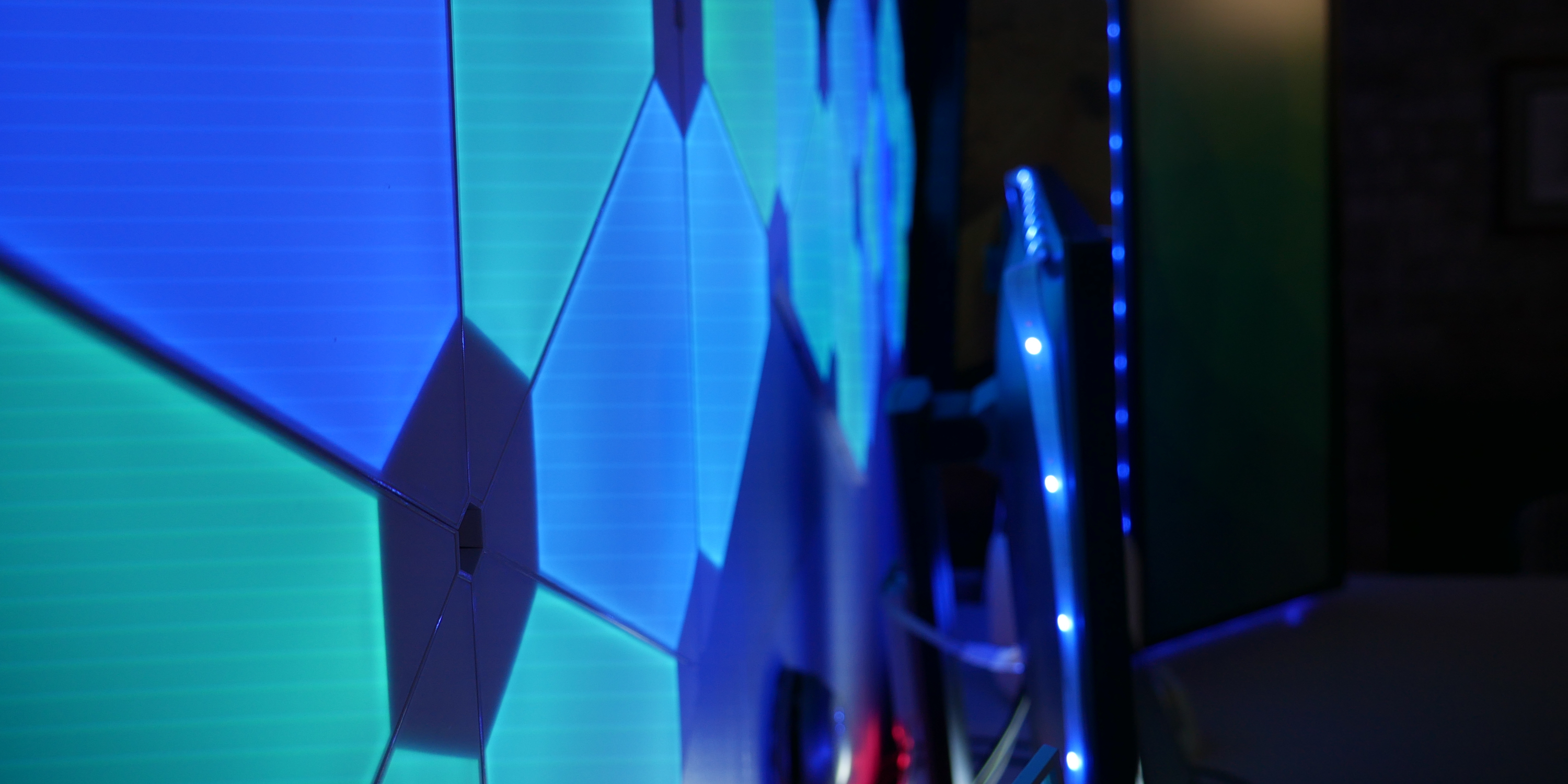 As a huge fan of home automation, I’ve outfitted all the lights in my office with Color Philips Hue bulbs. My workspace itself is covered in smart lighting as well, with a Hue Go as well as Lightstrip Plus attached to the back of my desk and each of the monitors. Above my setup are the beloved Nanoleaf Aurora lights.

Automations are scheduled throughout the day that change the lighting’s temperature or set different ambient lighting patterns on the Aurora lights. It may be overkill to have so many smart devices, but I couldn’t be happier with how things turned out. 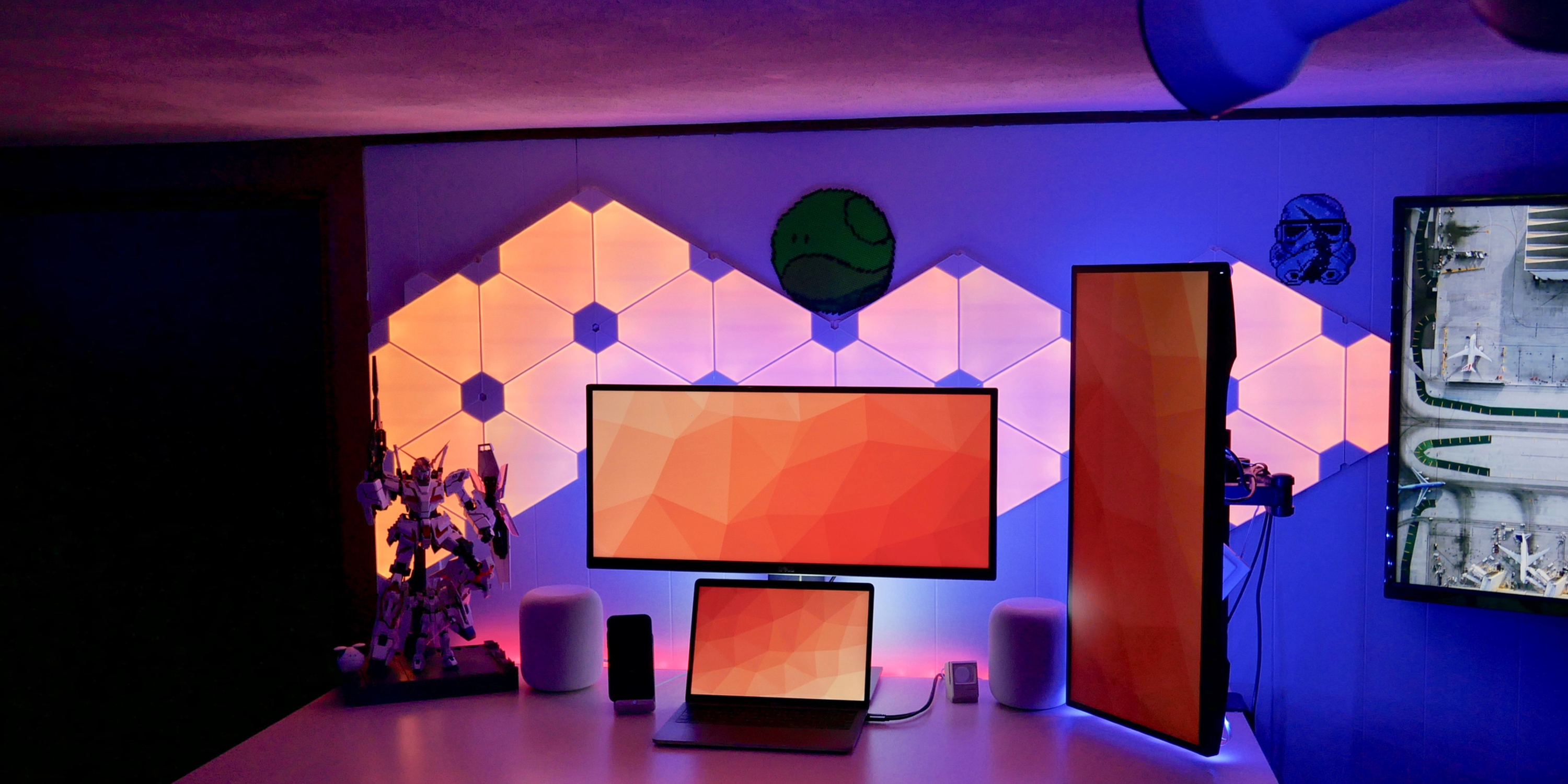 Despite all the upgrades I’ve made over the past few months, there are still some aspects of the workstation I’ve been rethinking. Picking up a Magic Trackpad and Magic Keyboard is at the top of the list, which would let me move my MacBook to a stand on the left-hand side of my desk. So far I haven’t given in, but it feels like I’m bound to make the switch.

Ideally I’d like to pick up a higher-end Thunderbolt hub that can drive both displays. Only having one that I had to connect my MacBook Pro to would be fantastic, but it really doesn’t make much of a difference.

Lastly, cable management is still kind of a mess. I’ve been doing my best to keep things tidy and so far I’m pretty happy with the current progress, but there’s still some work to be done tackling the cable clutter.