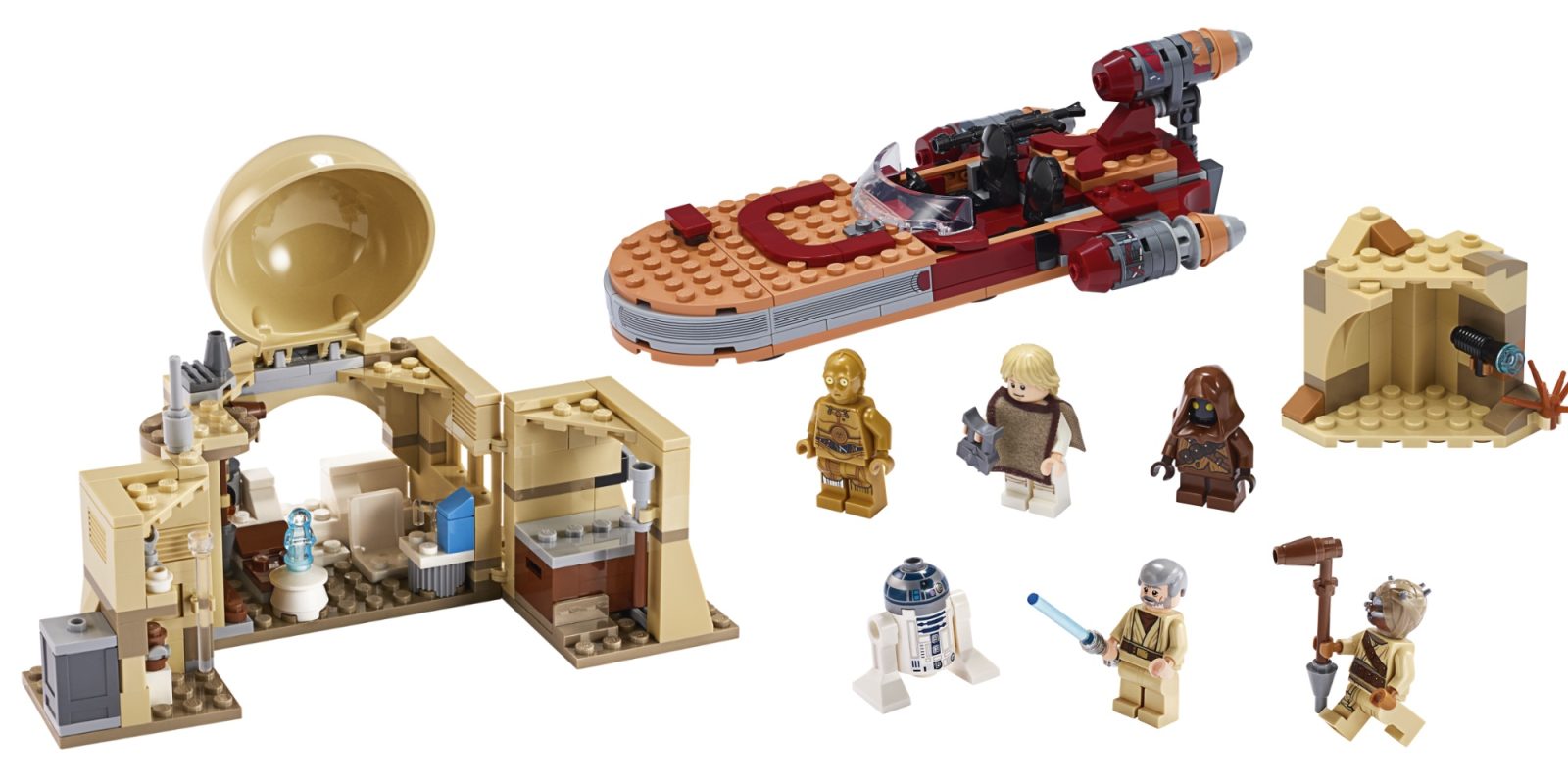 Following June’s new Captain Marvel and Batman Comic-Con sets, LEGO is back with two Tatooine-focused Star Wars builds. Today we’re getting at first look at the new creations; both of which journey to Luke’s home planet in order to recreate scenes from A New Hope. Hit the jump for a closer look at each of the new brick-built models from a galaxy far, far away.

Compared to many of the LEGO past sets which are released at Comic-Con, the new Star Wars models stand out for a few different reasons. While this year’s Marvel and DC releases both assembled display-worthy vignettes, the upcoming creations are more minifigure-centric.

First up is Obi-Wan’s Hut, which is comprised of 200 pieces. As the name plainly suggests, this kit recreates Luke’s famous encounter with the fallen Jedi Knight. Inside the hut is where Luke first hears Prince Leia’s distress signal; a part of the film which makes an appearance in the form of a brand-new element. Alongside including Luke and Old Ben minifigures, there’s also Tusken Raider and R2-D2 figure. 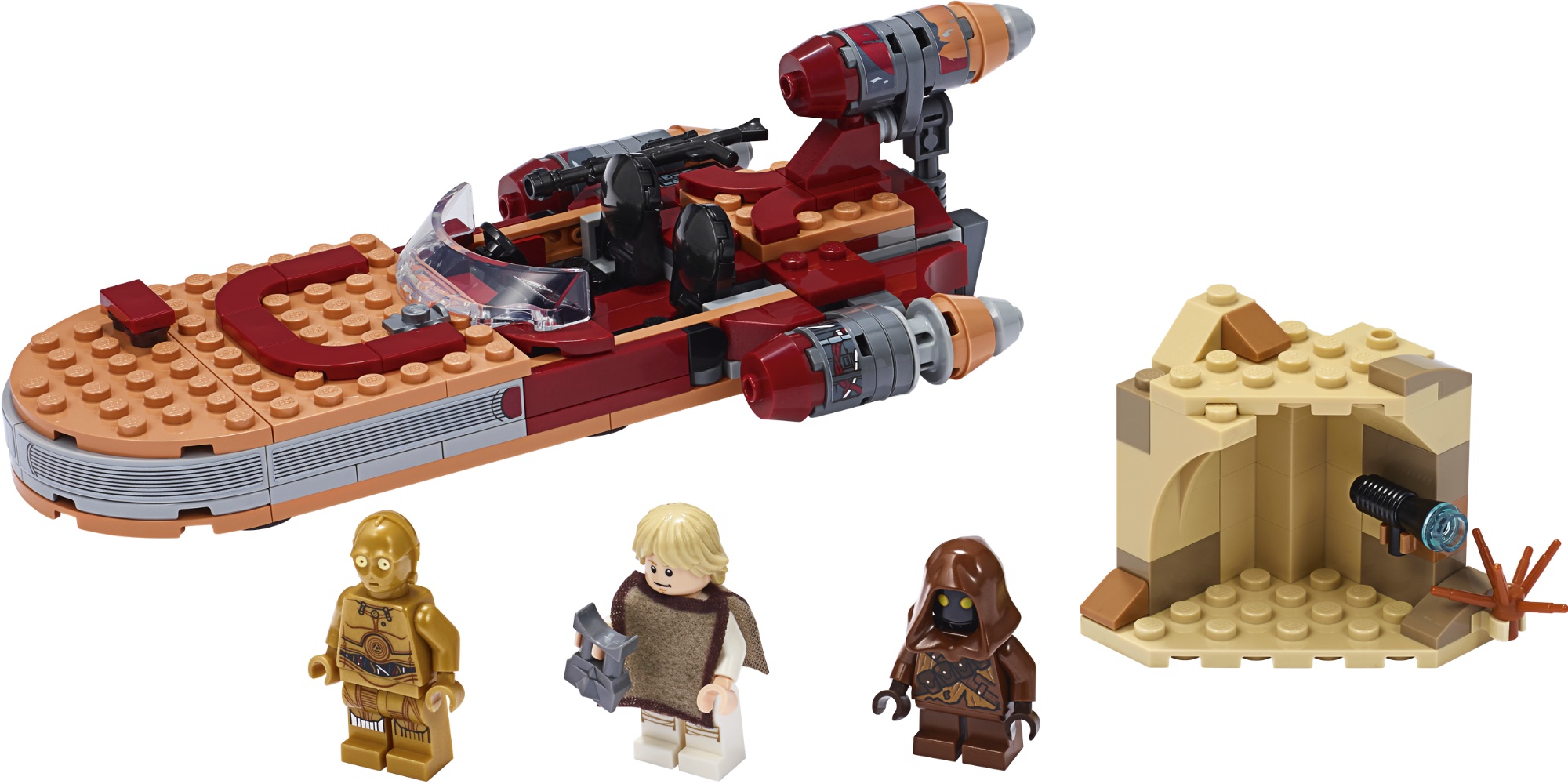 Continuing with the Tatooine theming, the second of today’s new Star Wars LEGO sets assembles Luke Skywalker’s Landspeeder. The 236-piece build isn’t as heavy on minifigures as the other model, but gives us the most detailed brick-built release of the Landspeeder yet. It of course includes Luke, but you’ll also find C-3PO as well as a Jawa.

Both of the creations ditch the typical Comic-Con style box art and collectibility. Unlike these other builds we’ve seen intended for the convention, LEGO will not be making today’s releasing exclusives. Each of the new Star Wars kits will be made available to the public at a later date. And LEGO certainly emphasizes the later here, as you won’t be able to add them to your collection until January 1st of 2020.

Today’s releases also carry a more affordable price tag, with both Luke Skywalker’s Landspeeder and Obi-Wan’s Hut retailing for $29.99 each.

Your young Jedi will love this detailed LEGO® Star WarsTM 75270 Obi-Wan’s Hut model. The hut folds out for easy access and there are lots of cool items to spark kids’ creativity, including Lightsabers, a training remote and a new-for-January 2020 Princess Leia hologram element to recreate classic Star Wars: A New Hope scenes. The set includes iconic Star Wars characters Obi-Wan, Luke Skywalker and R2-D2, plus a Tusken Raider for role-play battles.

Young Jedi will love pretending to power across the Tatooine desert with this new-for-January-2020,collectible LEGO® Star WarsTM 75271 Luke Skywalker’s X-34 Landspeeder model! More detailed thanever before, there’s space for the Luke and C-3PO minifigures, an opening trunk with macrobinocularsinside, and a clip for Luke’s blaster rifle to inspire creative play. And kids can reimagine Star Wars: A New Hope movie action with the buildable cave hideout for an armed Jawa minifigure.