CES is a great place to get a sneak peek at some of the prototypes in development, like Alienware’s new Concept UFO. It is a small handheld gaming system that is essentially a full-on Windows 10 gaming PC in the shape of a Nintendo Switch in almost every way. Head below for a closer look and more details.

Concept UFO is identical to a Nintendo Switch. It consists of the central console unit, which houses the 8-inch, 1200p display along with all the CPU/GPU hardware and the internal battery. A pair of Joy-Con like controllers affix to the side of the unit using a magnetic rail system, while an included dock allows you to connect it to the big screen. There’s even a small device that acts like a Joy-Con Grip to transform both smaller controllers into a single gamepad.

You’ll find a pair of USB-C connectors along the top and bottom of the main angular unit that allow for both charging and connecting to external monitors. But this is a Windows 10 machine with a custom front head in top, so you can just as easily use it as a typical PC with a mouse and keyboard connected via USB-C as well. 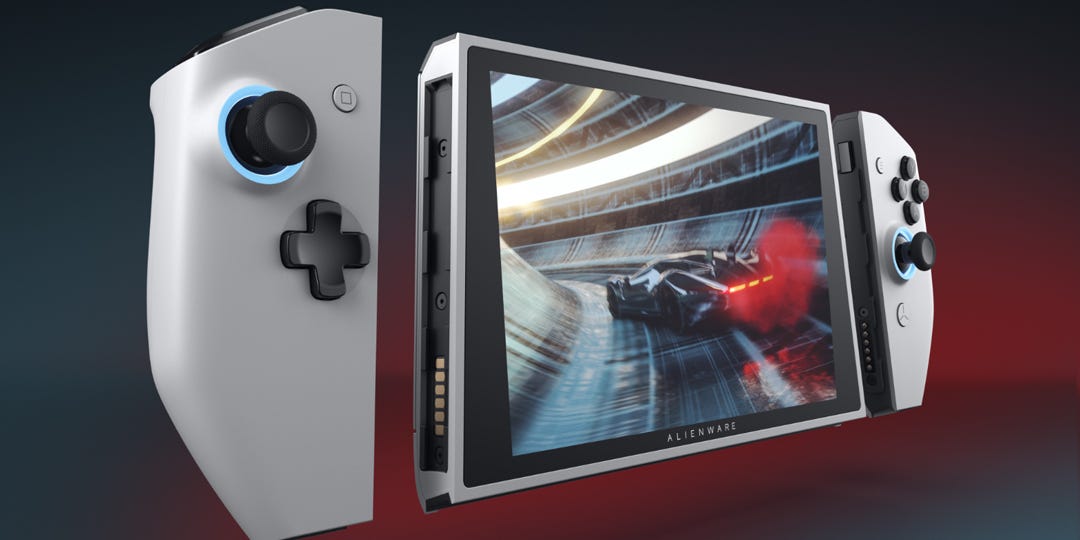 The futuristic aesthetics have Alienware written all over it with a sharp, angular design and lit-up thumbtacks. According to reports, the Concept UFO is also significantly more massive than something like the Nintendo Switch, which makes sense based on the games it is supposed to be able to run. Hands-on accounts suggest the demo games were less intensive titles like Rocket League, F1 2019, and Mortal Kombat 11, but the system’s fans were already in overdrive.

While the Concept UFO might still be a prototype, it’s still quite an exciting one. The hardware/software optimization still needs some tweaking by the sounds of it, but a Nintendo Switch-like device that can potentially run any Windows 10 game could be a game-changer. It’s not an unheard-of concept, but Alienware looks to be experimenting with a proper portable Windows machine to market. As of right now, this is very much a prototype concept with no details on release and the like.

For more CES 2020 announcements, be sure to swing by our guide. We have already seen our fair saber of gaming-related gear, including a closer look at the Xbox Series X ports, the Super Retro Champ handheld console, Razer’s Kishi gaming controllers for iPhone and Android and Origin’s new PC gaming rig with built-in Xbox One or PS4 Pro console.