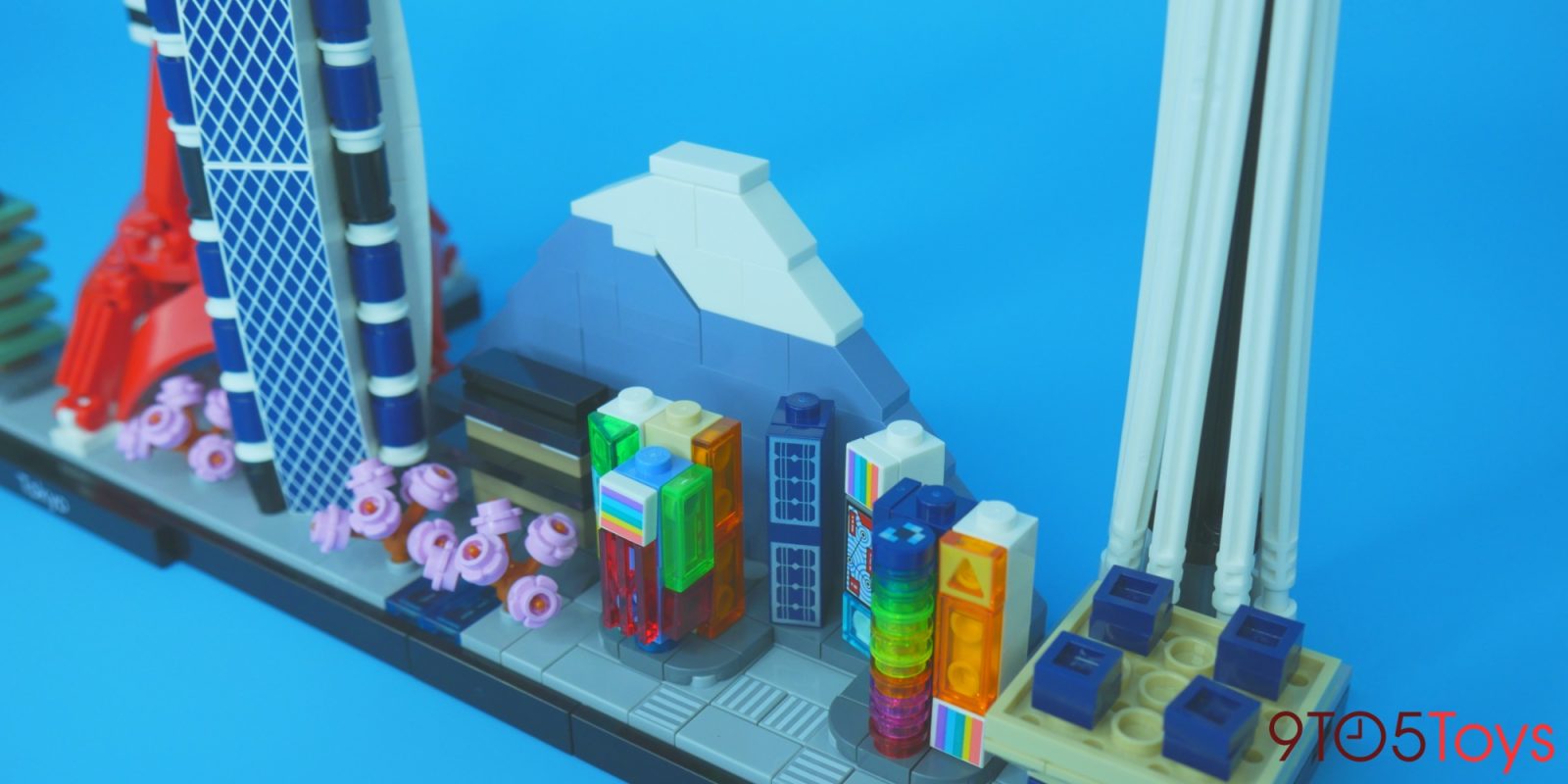 At the beginning of the year, the LEGO Architecture lineup saw its two most recent additions arrive in the form of new Japan and United Arab Emirates creations. Today we’ll be taking a hands-on look at the former of the two kits, the 550-piece Tokyo Skyline. Complete with some excellent new printed elements and a solid price tag, this kit stacks up to one of the more well-rounded and highly-detailed models in the Architecture series. Head below for our full LEGO Tokyo Skyline review.

While this won’t be the first time that LEGO has headed east to The Land of the Rising Sun for its Architecture series, this is the brick-built debut for just about all of the included landmarks. Spread across the kit’s included 547-pieces, you’ll assemble iconic locations like Tokyo Tower, Shibuya Crossing, Mode Gakuen Cocoon Tower, and more. This ensemble of Japanese cultural icons is completed with a fitting Mount Fuji backdrop. Everything is then topped off with some cherry blossom trees.

Fitting into the same footprint as past LEGO Architecture kits, the Tokyo Skyline stands 11-inches tall at its highest point and is 10-inches wide. Instructions are another area that stays consistent with the greater Architecture lineup and are packed with tidbits about Japan as a whole. Then throughout the build, occasional blurbs appear to offer additional information about specific sections of the creation. 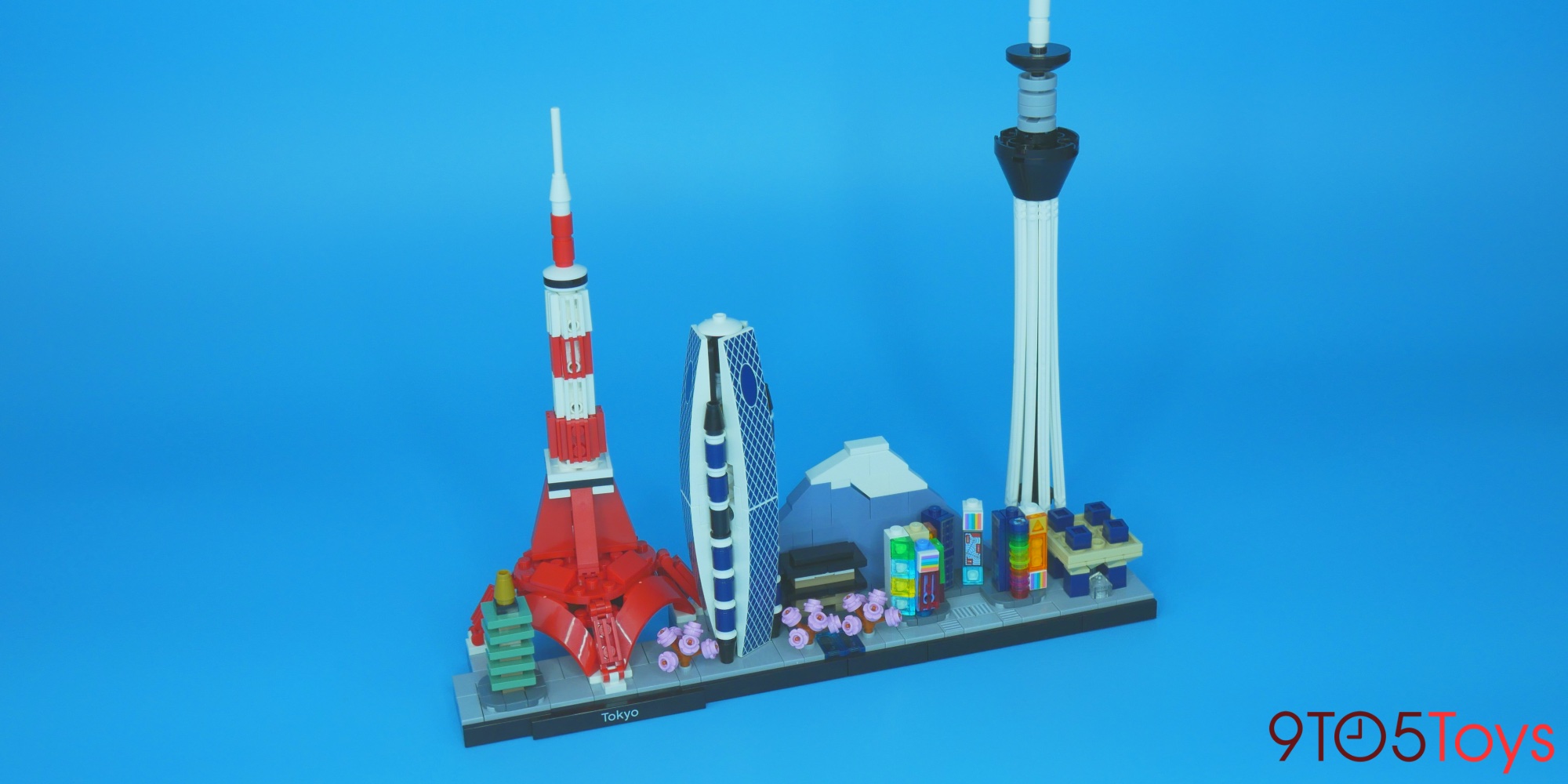 To recreate the various landmarks as instantly-recognizable builds at such a small scale, LEGO has to rely on some interesting part usage. Over the years, the Architecture sets have become more and more refined, and the Tokyo Skyline delivers a culmination of techniques that think outside the box and usage of unique elements.

The former can easily be noted when assembling the Mode Gakuen Cocoon Tower as well as Tokyo Tower. Both rely on some interesting processes that are more in-depth than other sections of the Tokyo Skyline. Unlike some of the other LEGO Architecture builds, you won’t find many of the same techniques repeated over and over throughout the build. Having a batch of different building methods not only allows all of the landmarks to clear standout from one another, but provides a fun assembly experience. 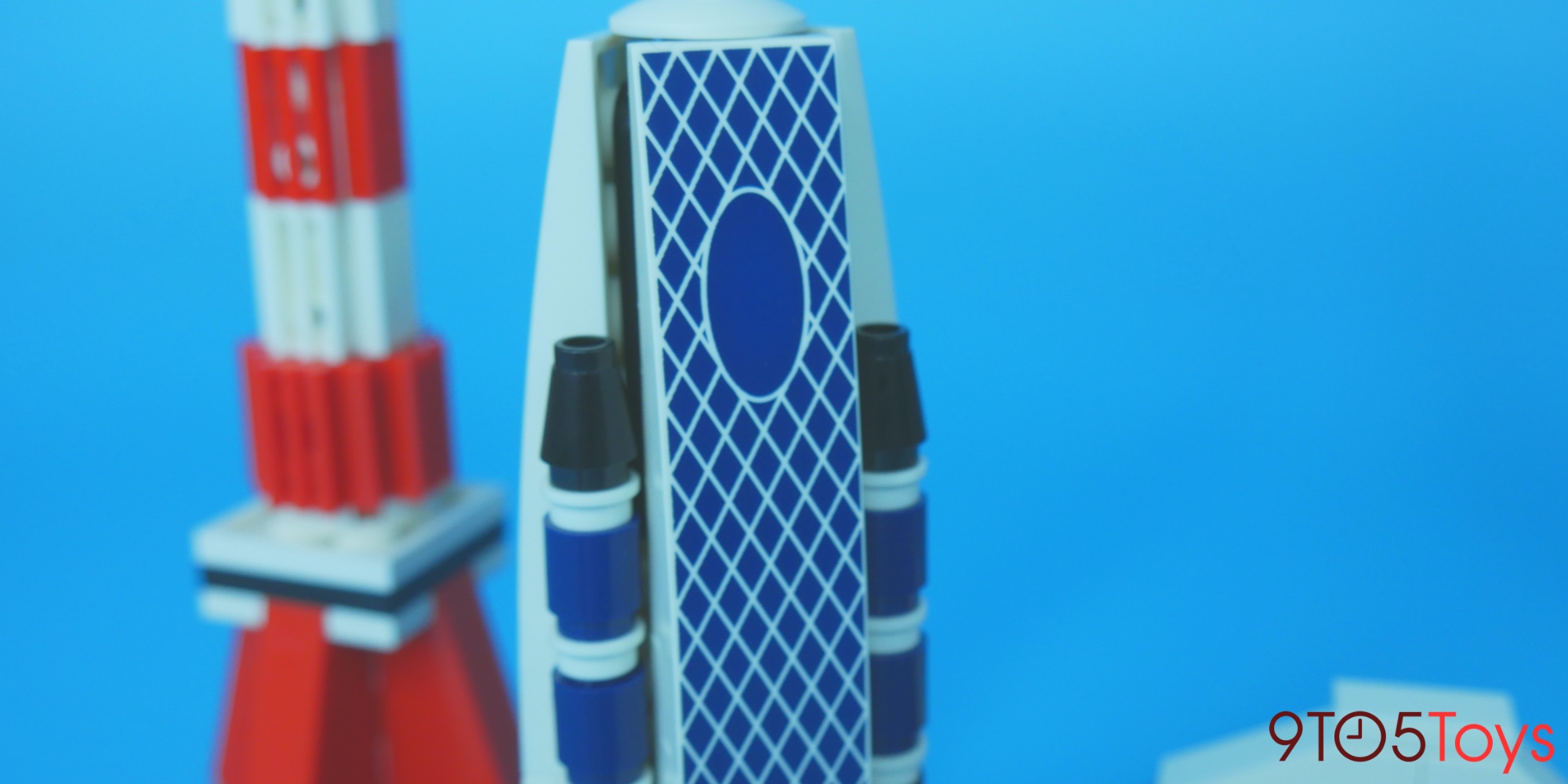 Now when it comes to unique elements, there’s plenty to be excited about. From printed 1 x 1 tiles, which represent street crosswalks to some neon bricks for depicting the lively Shibuya Crossing, there are a lot of bricks that LEGO builders will want to bring home for their creations. By far, the coolest of the unique pieces here are the printed curved slopes which accomplish the Cocoon Tower’s latticework exterior.

If it ain’t broke, don’t fix it

Despite bringing Tokyo into the brick-built world for the first time, this Skyline set touts simple techniques that LEGO Architecture veterans will surely recognize. Many of the smaller portions of the build are staples of the microscale landscapes; after all, there are only so many ways to design a city building, for instance. 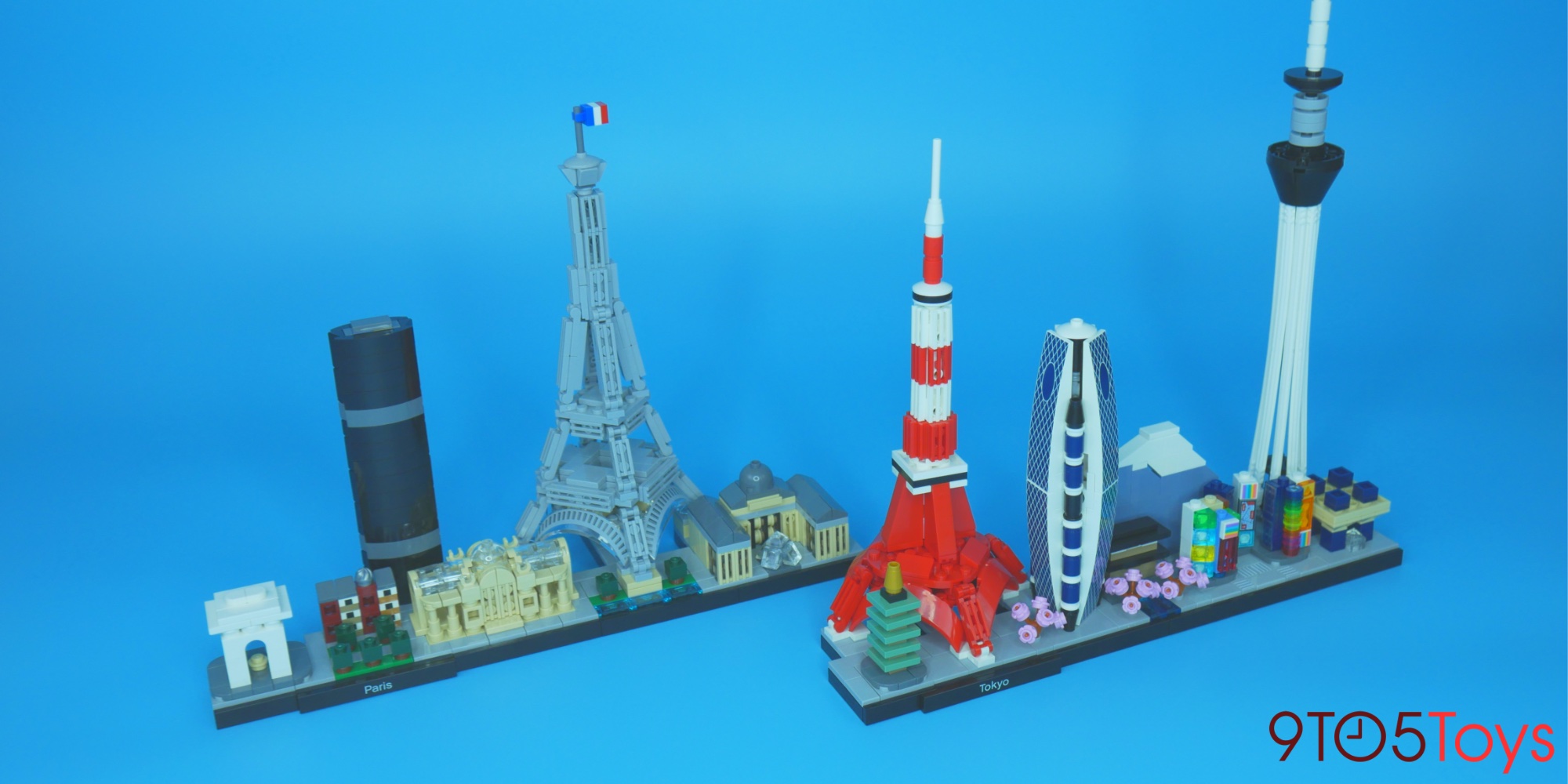 Outside of those instances, LEGO has opted to refresh a few structures that were in previous kits, for better or worse. One such of those is Tokyo Tower, which clones the base from the Paris LEGO Architecture installation.

Of course, there’s a fresh red coat of paint, but the design is quite similar. It may feel like cheating, but the way that LEGO was able to differentiate this section of the Tokyo Skyline from its French brethren is impressive. While the Eiffel Tower served as a real-world inspiration for Tokyo Tower, it’s only fitting that the LEGO Architecture version would too.

One area where trying to repurpose a design of the past doesn’t work so flawlessly is with the Tokyo Skytree. The rubbery tube elements are only secured into place at the bottom, with friction keeping them held together at the top of the structure. It took a lot of finessing to get all eight of the beams to line up in a uniform way that looks right, and even then, it was still a little off compared to what you’d find in the instruction booklet. So I wish the set’s designer would have opted to leverage some other pieces or at least changed the design a little. 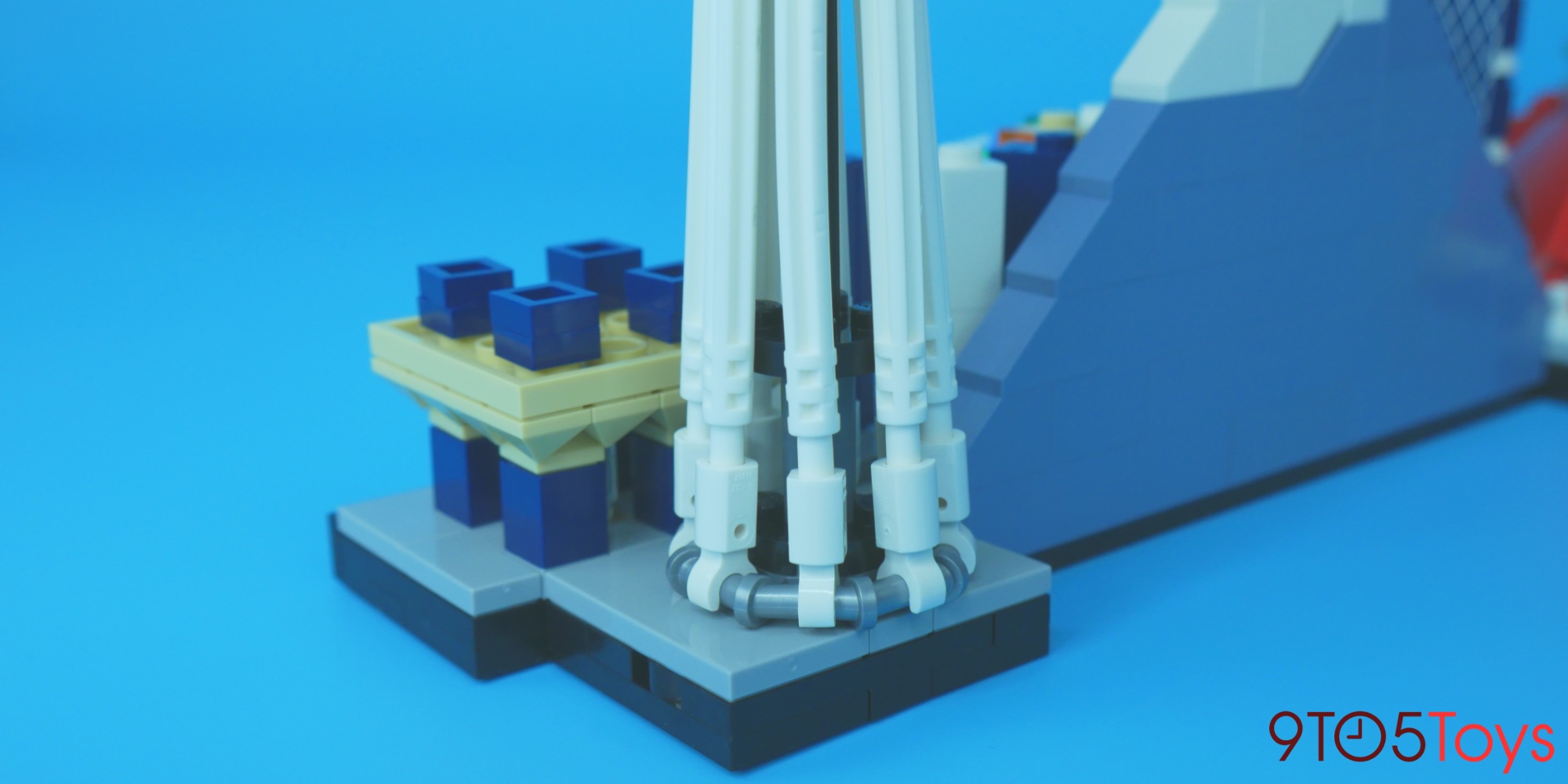 Aside from the value that the overall model brings, this kit packs a relatively decent amount of bricks for the cash you’re spending. Priced at $59.99, the LEGO Tokyo Skyline includes 547 pieces. That equates to about $0.11 per brick, or right around the sweet spot that we always hope to see.

That valuation doesn’t consider the quality of the bricks you’re getting, with plenty of elements that are out of the ordinary. Between the slew of printed pieces and less common parts, there’s a lot to be said about how LEGO chose to portion out the allowance of bricks thus time around.

Is LEGO’s most recent Architecture set worth your time?

So when it’s all said and done with our review, is the most recent Architecture kit, the LEGO Tokyo Skyline, worthy of your collection? Absolutely. You won’t find the same overall building experience, part selection, or final model in any of the LEGO Architecture sets that have come before. The variety in each of the individual sections make it stand out compared to some of the more uniform Skyline builds.

It’s easy to recommend at full price, and with this being such a new kit, odds are it’ll be a while before we see a price drop. Though as much of an instant-buy and it stands now, any future discounts will surely make this one of the coolest creations on the market for the price.

Buy the LEGO Tokyo Skyline set featured in our review

Read more
You’re reading 9to5Toys — experts digging up all the latest technology and lifestyle deals, day after day. Be sure to check out our homepage for all the latest news, and follow 9to5Toys on Twitter, Facebook, and LinkedIn to stay in the loop. Don’t know where to start? Check out the best Apple deals, our daily podcast, and subscribe to our YouTube channel