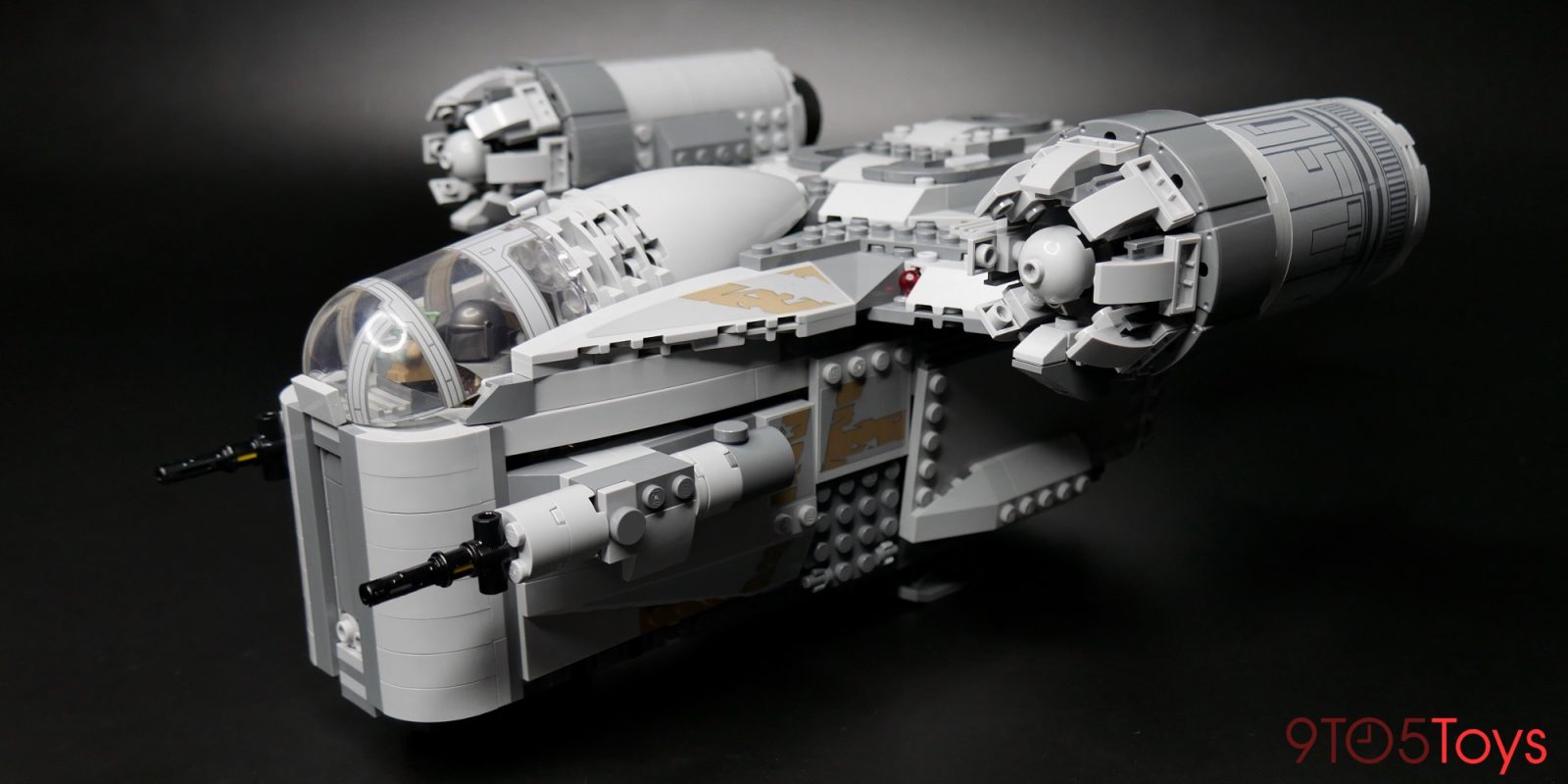 After first being announced in February, the latest LEGO Star Wars set from The Mandalorian finally dropped at the beginning of the week. Debuting as the bounty hunter’s iconic ship, the new Razor Crest stands out among the LEGO catalog, not just because of its unique design, but also its must-have selection of minifigures. Head below for a closer look at the build and all of our thoughts on the latest creation from a galaxy far, far away.

The latest creation from The Mandalorian brings the Razor Crest into brick-built form for the very first time. Stacking up to 1,023 pieces, the creation stands over 15 inches long, 5 inches tall, and 11 inches wide. Inside and out, there are plenty of details that make this build instantly recognizable to fans of the show, but we’ll start with the exterior.

First and foremost, the ship has a pretty great presence and is much larger than I had initially anticipated. All of the included bricks are put to great use throughout, resulting in a model that looks fantastic. At minifigure scale, it’s not too often that ships nail the source material, but that’s by no means the case here. The cockpit area is easily one of the best aspects of the ship in terms of how well it was executed with the new printed canopy piece. But some other highlights include the two massive engines on either side, as well as the overall shaping for some of the more complex angles. 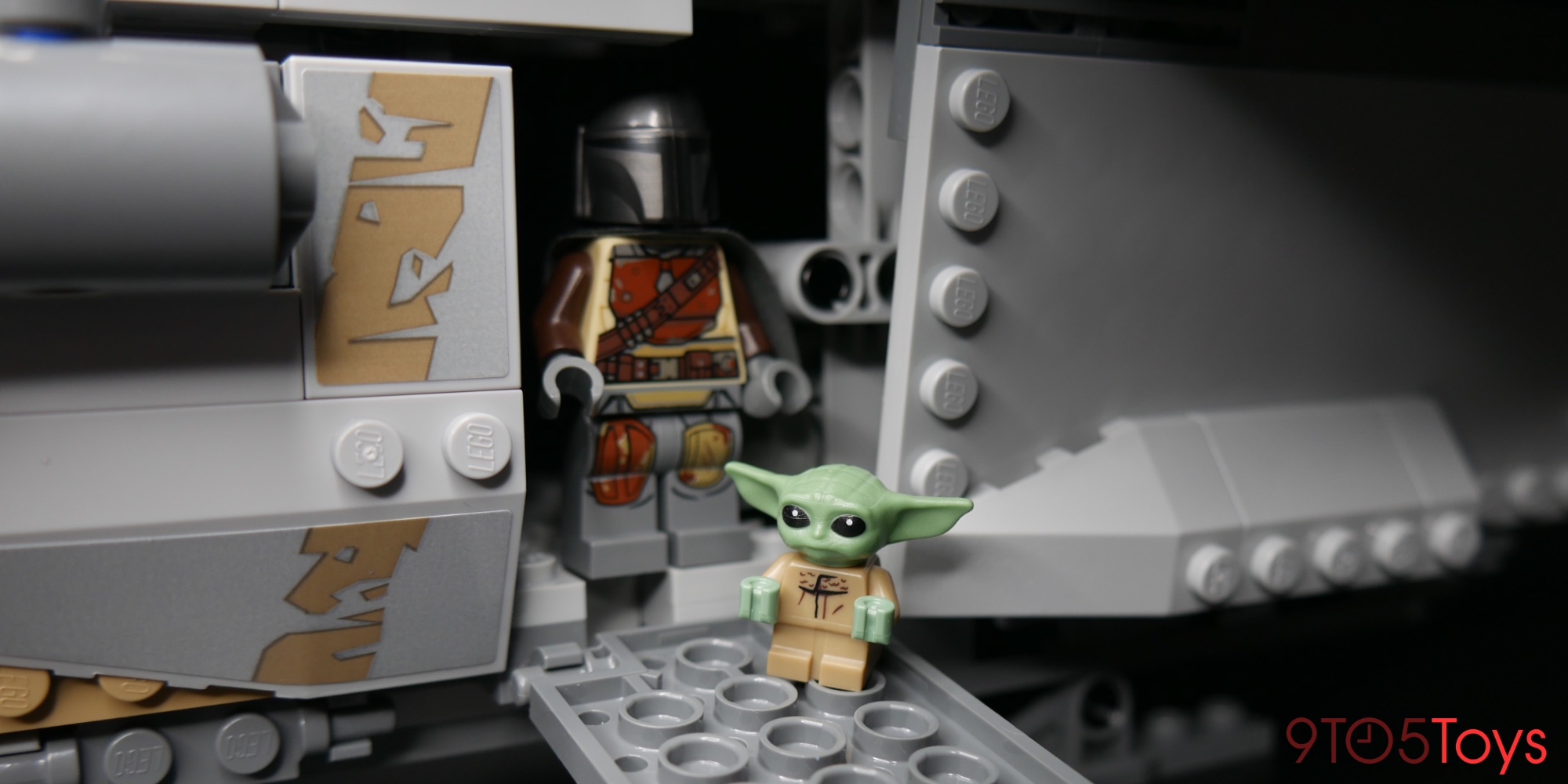 Not only does it have an insane display-ablity factor with its attention to detail, but the build is very sturdy, too. So if you’re picking this up for your little ones to swoosh around, it should be able to stand up to more rugged play than the average starfighter.

LEGO has also packed the inside of the Razor Crest with some eye-catching details as well. The ship notably folds open to give you a better look at the inside, with a series of panels around the outside that fold down.

The cockpit is also fairly detailed and has room for a pair of figures to sit down. It’s not quite as accurate to as what you’ll see in The Mandalorian itself, but gets the job done for the scale. Moving into the back of the ship, there’s plenty of storage for the rest of the ship’s crew as well as some other noteworthy inclusions. On the left hand side of the Razer Crest you’ll find a bed for the bounty hunter to rest on, as well as a pair of the carbon-frozen bounties.

There’s also a little escape pod on the top of the ship. It blends in pretty well and doesn’t utilize too many bricks to pull off the distinct look, which is really the most praise I can give here. Often these kinds of builds are clearly afterthoughts, and the fact that it’s so well-integrated into the model here is a huge plus.

A closer look at the minifigures 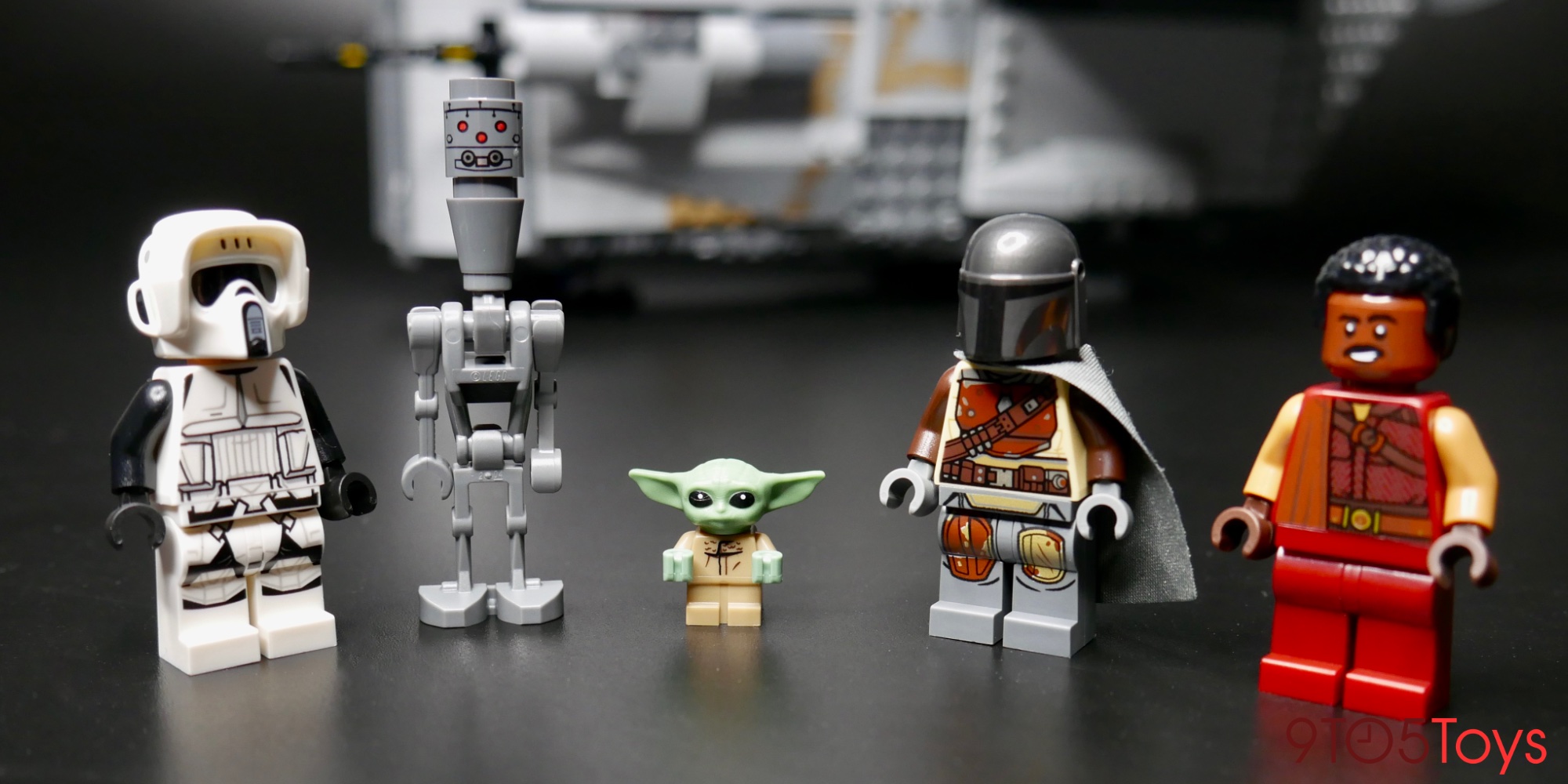 Regardless of everything the Razor Crest has going for it, this kit’s included figures are an equally enticing aspect of the build. While you’re getting a total of three minifigures and a droid, the real star of the show is The Child, aka Baby Yoda.

As of now, the Razor Crest is the first appearance of the figure to date in the LEGO world, and oh, was it worth the wait. Iterating on the existing baby figure design that we’ve seen over the years, there’s an entirely new head and some printing on the body to give him the swaddled look from the series.

On top of The Child, you’re also getting four other brick-built characters that round out the main cast of the Disney+ series. The Mandalorian himself makes a second appearance in this set after first being introduced in the AT-ST Raider that we reviewed last year. Unfortunately, it’s still the same future, and he’s not donning the Beskar armor shown later on in the series. Nonetheless, it’s still a great figure, especially for those who haven’t added it to their collections. 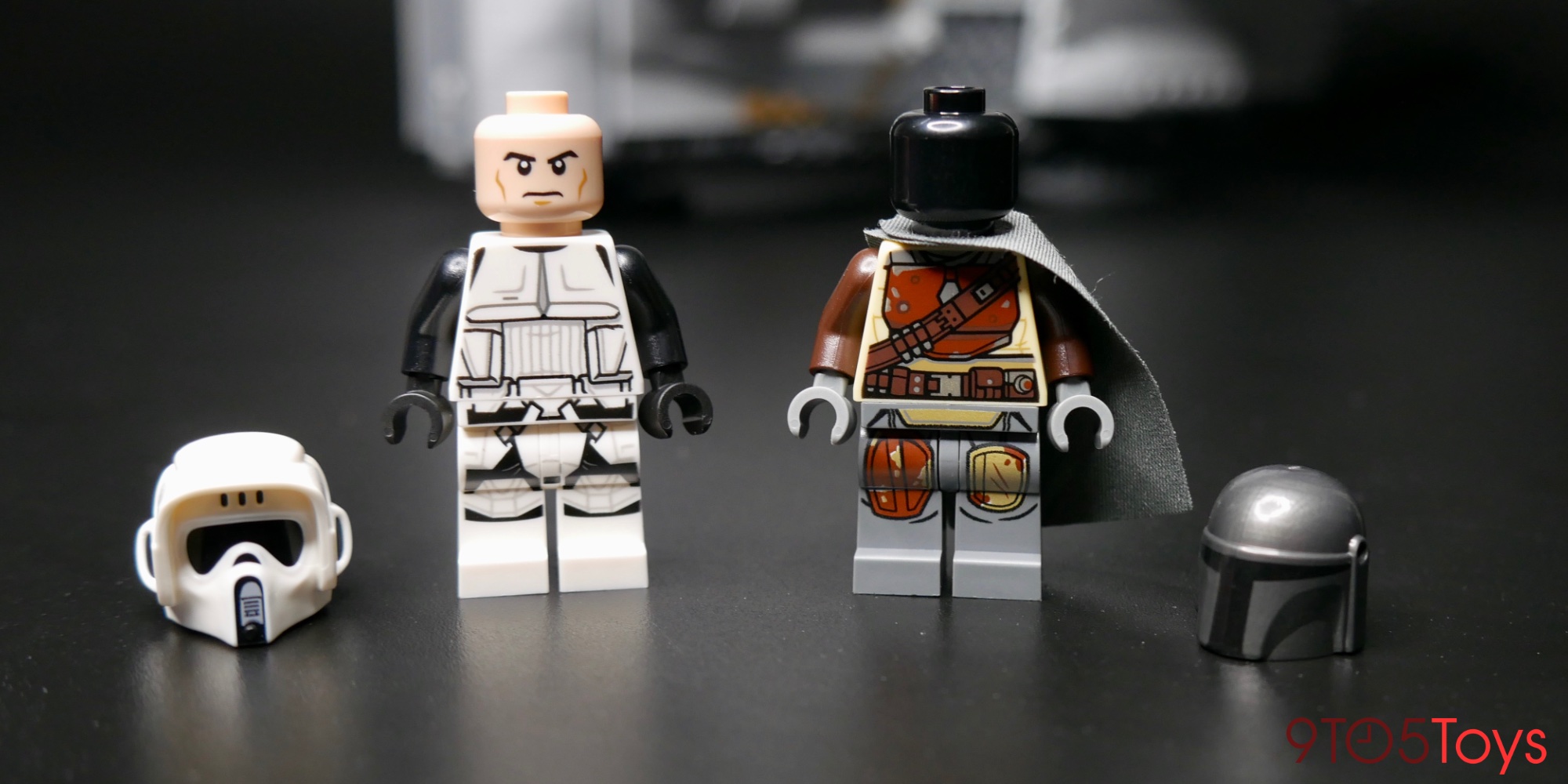 Greef Karga also makes a brick-built debut in this set. The minifigure has some solid printing on the torso and does Carl Weathers’ character in the series justice. There’s also a Scout Trooper included here, which we’ve seen in a handful of kits in the past. Alongside just having phenomenal printing throughout, it’s funny that this figure includes an actual head before The Mandalorian does.

Lastly, there’s an IG-11 droid that rounds out the included figures here. It’s the same design as other IG series droids in the past, but does notably still have printing on the head piece. These haven’t been all too common in the LEGO Star Wars world, so it’s certainly a nice addition to the kit. 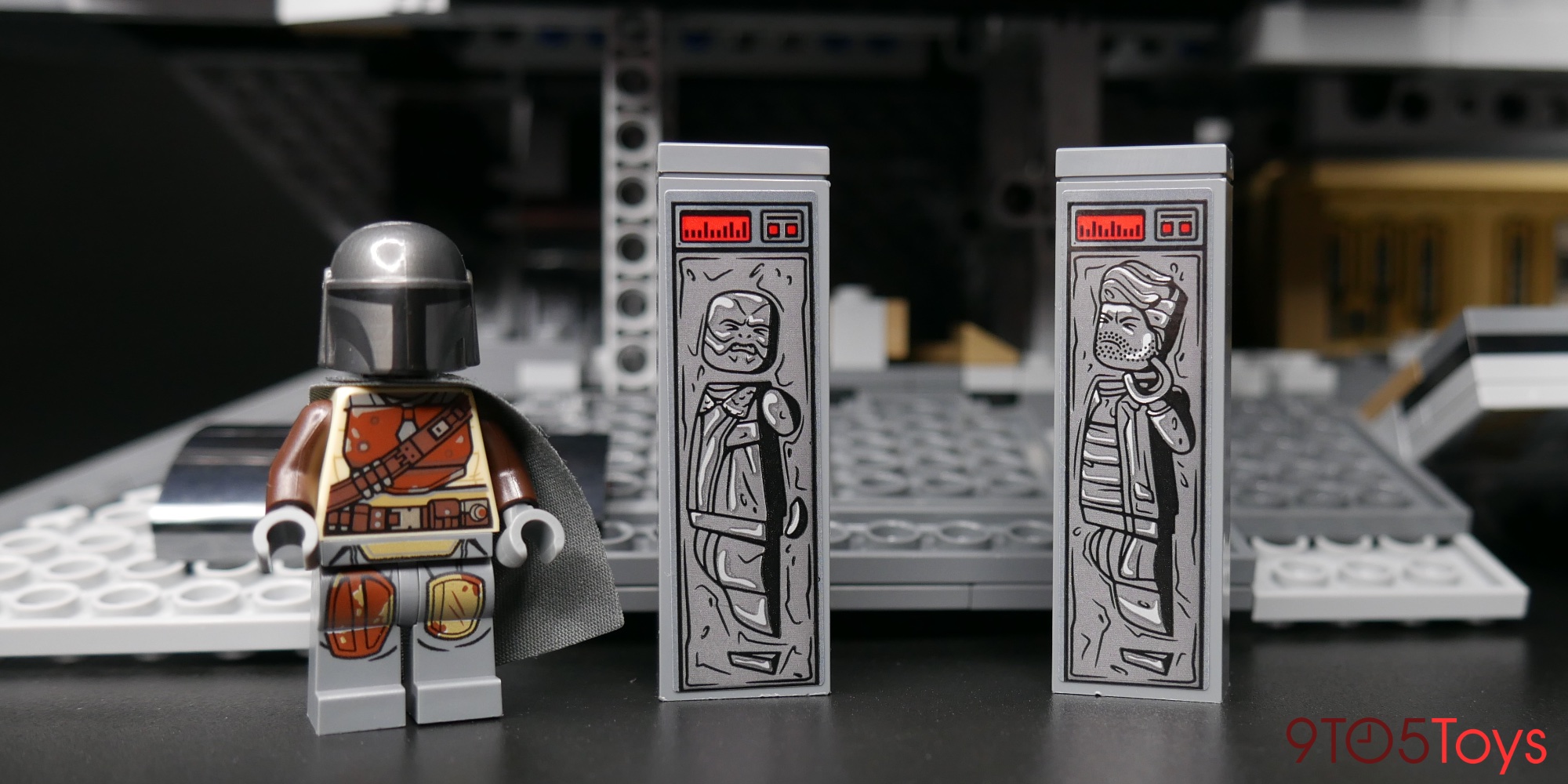 If there’s ever a set that is more than worth its price per dollar ratio, you’re looking at it. Entering with 1,029 bricks at $129.99 isn’t a great value on paper, but there’s so much going for this creation outside just the number of pieces you’re getting. The final model exceeds my original expectations and really does the ship justice compared to its on-screen counterpart. The size of the LEGO Razor Crest alone makes me feel like you’re getting your money’s worth here, not to mention, the fact that it also includes pair of exclusive figures alongside three additional minifigures.

How does it compare to other LEGO Star Wars kits?

When it comes to spending this kind of cash on any other LEGO set, does it still hold up? Absolutely. $130 goes a long way in the LEGO world these days, but there’s nothing quite like this for Star Wars fans, and it all comes down to two words: Baby Yoda. This minifigure is easily going to be the one of the sole reasons people get this set, and rightfully so. But even setting The Child aside, the Razor Crest stands out from pretty much any other LEGO set. 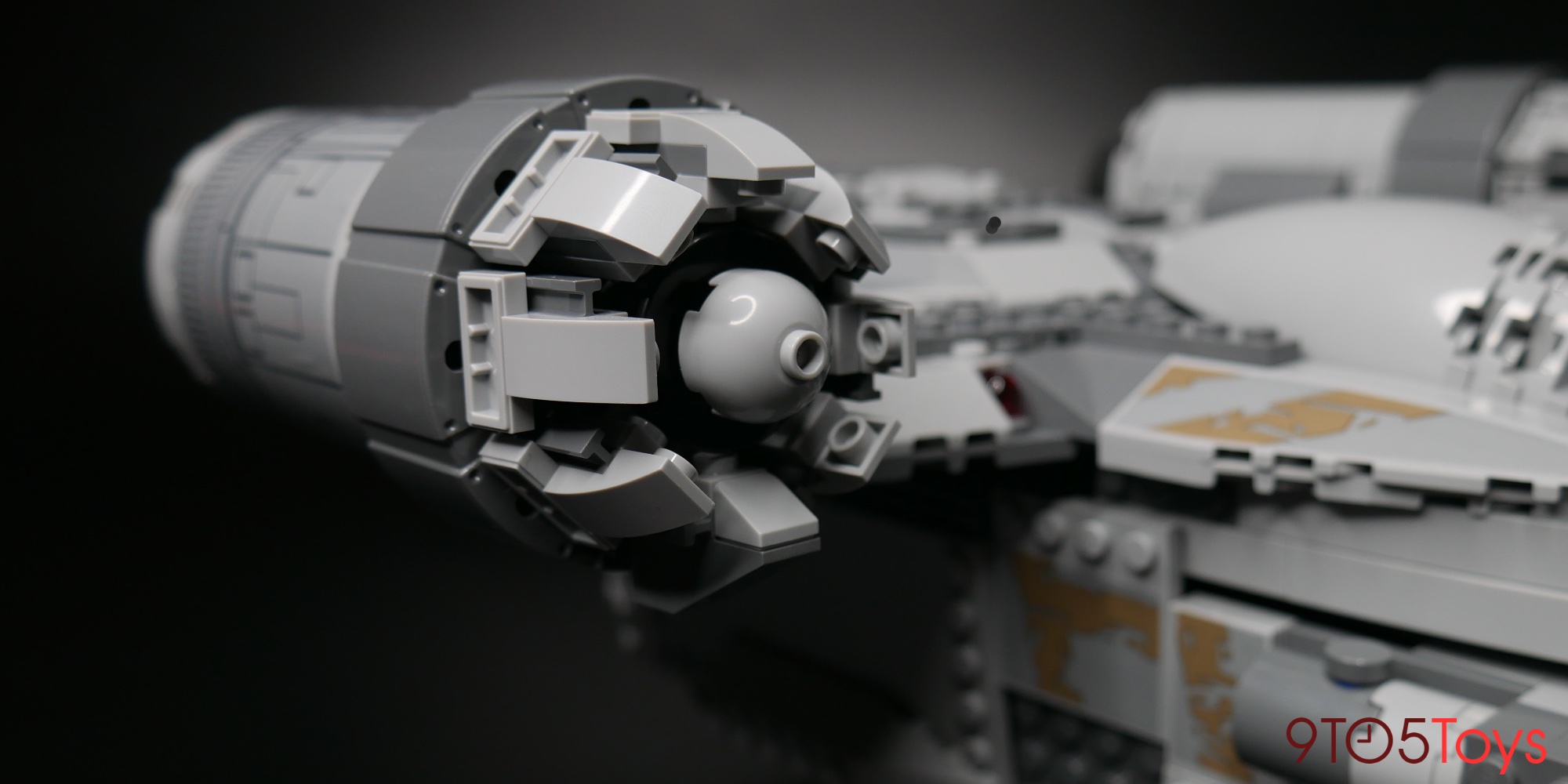 All things considered, the LEGO Razor Crest is easily my favorite Star Wars kit of the year so far. Aside from how great it would have been for LEGO to include a Beskar armor version of The Mandalorian, there’s not too much here that I’d change. The price feels more than justifiable, and the final build is fantastic. While this isn’t one of the more recent kits geared toward adults, specifically, it feels like a miniature UCS kit in just how display-worthy it is.

The Razor Crest would have been one of the best kits of the year just by itself, but the fact that you’re getting a collection of great minifigures really seals the deal for me. Baby Yoda will likely steal the show for many collectors, but all the other characters are great additions, too. So with the second season of The Mandalorian coming out in just under two months, this will surely be a fan favorite as we head into the fall.