Review: LEGO’s Super Mario theme is finally here, but was it worth the wait? 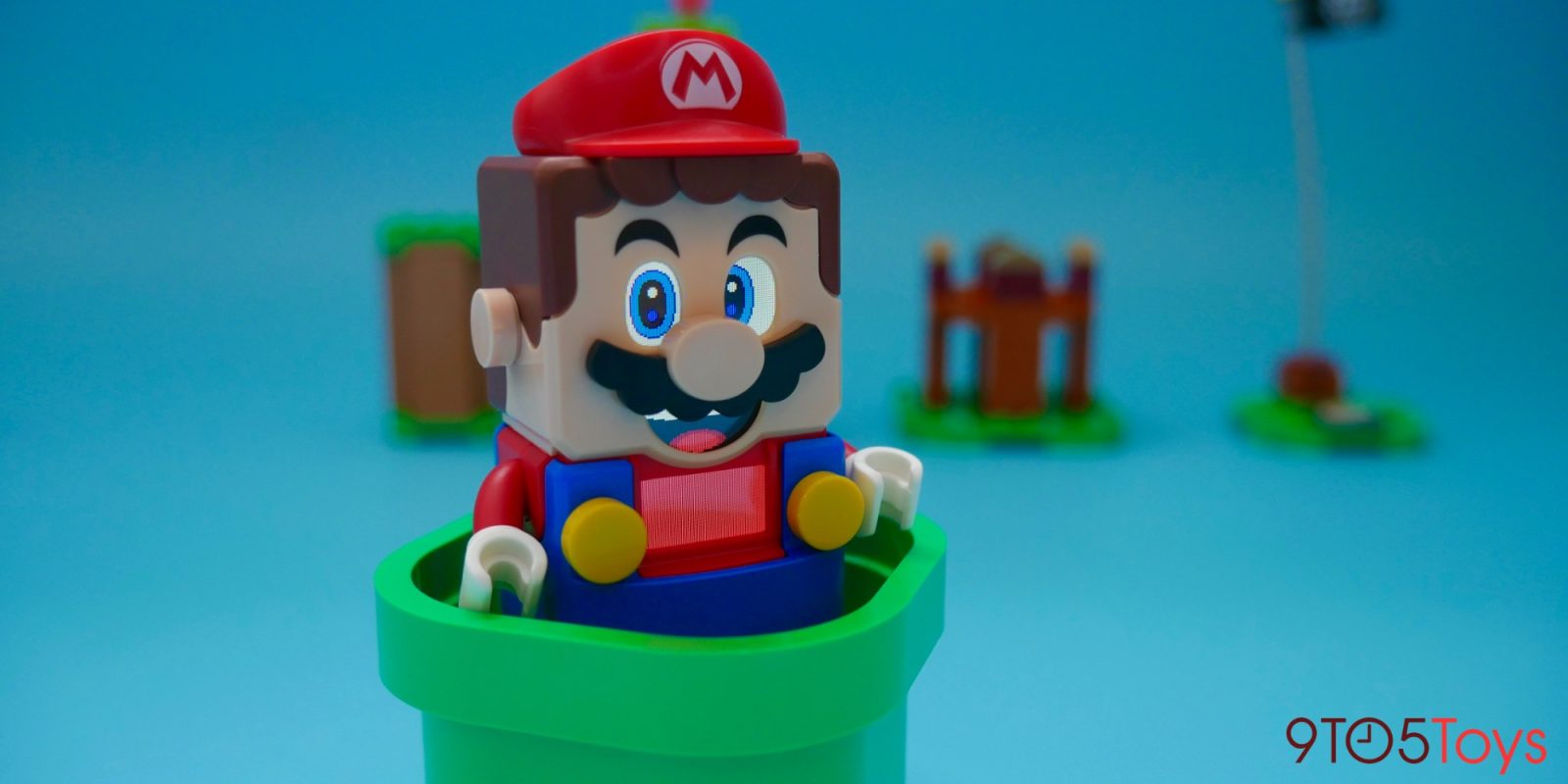 After going hands-on with the NES last month, today we’re turning our attention to yet another creation from LEGO and Nintendo’s recent collaboration. The new Super Mario theme kicks off with a starter course set that includes a brick-built version of the iconic character complete with integrated displays, sound effects, and more to mix up the usual LEGO formula. How does Mario’s debut into the world of LEGO pay off? Be sure to head below for all of the details as we take a closer look at the LEGO Super Mario Starter Course in our latest review.

Nintendo’s introduction to the world of LEGO seems like a long time coming, especially after having to wait a few months since being revealed in March. I’ve been playing around with it for about a month now, and am finally ready to dive in to cover all the details on this unique kit.

The LEGO Super Mario Starter Course enters as just one of a few new Nintendo kits launched earlier this summer. While you’ll find a pretty expansive collection of other characters, locations, and power-ups from the Mushroom Kingdom in the other kits, this one is the core piece of the experience. It includes 231-pieces, and most notably, an all-new electronic Mario figure. 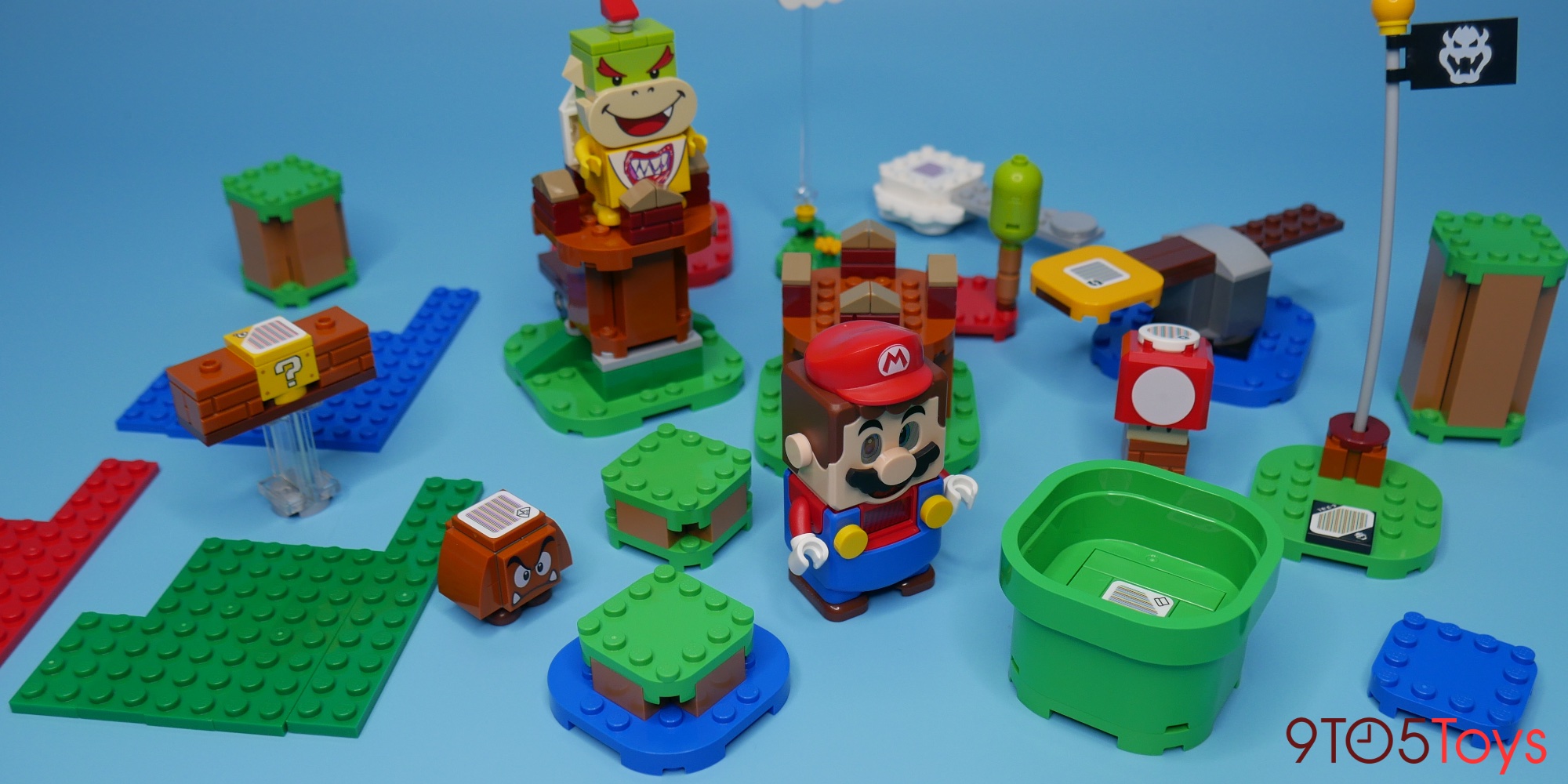 You’re also getting various structures from the Super Mario world in the LEGO starter course, as well as Bowser Jr. and a Goomba, but more on that later in the review. Building is a bit different from most other LEGO kits out there, as you’ll have follow entirely digital instructions to actually piece together the set.

As the very first brick-built version of Mario, there are plenty of new bricks here to help bring the franchise to life. Mario aside, there are some new molds for everything from the Goomba’s feet to Bowser Jr.’s shell and more. LEGO is also introducing some pre-applied sticker pieces for Mario to interact with that are said to be more durable over time.

Aside from just bringing Nintendo characters to the LEGO world for the first time, there’s also plenty of exclusive bricks in the theme, as well. The most apparent of these are the new baseplate pieces, which are at the center of the experience here. They’re what allow you to so easily assemble new layouts and courses thanks to the larger size. These bricks come in four colors, which are complemented by some traditional bricks and plates that complete the set.

A closer look at the new Mario figure 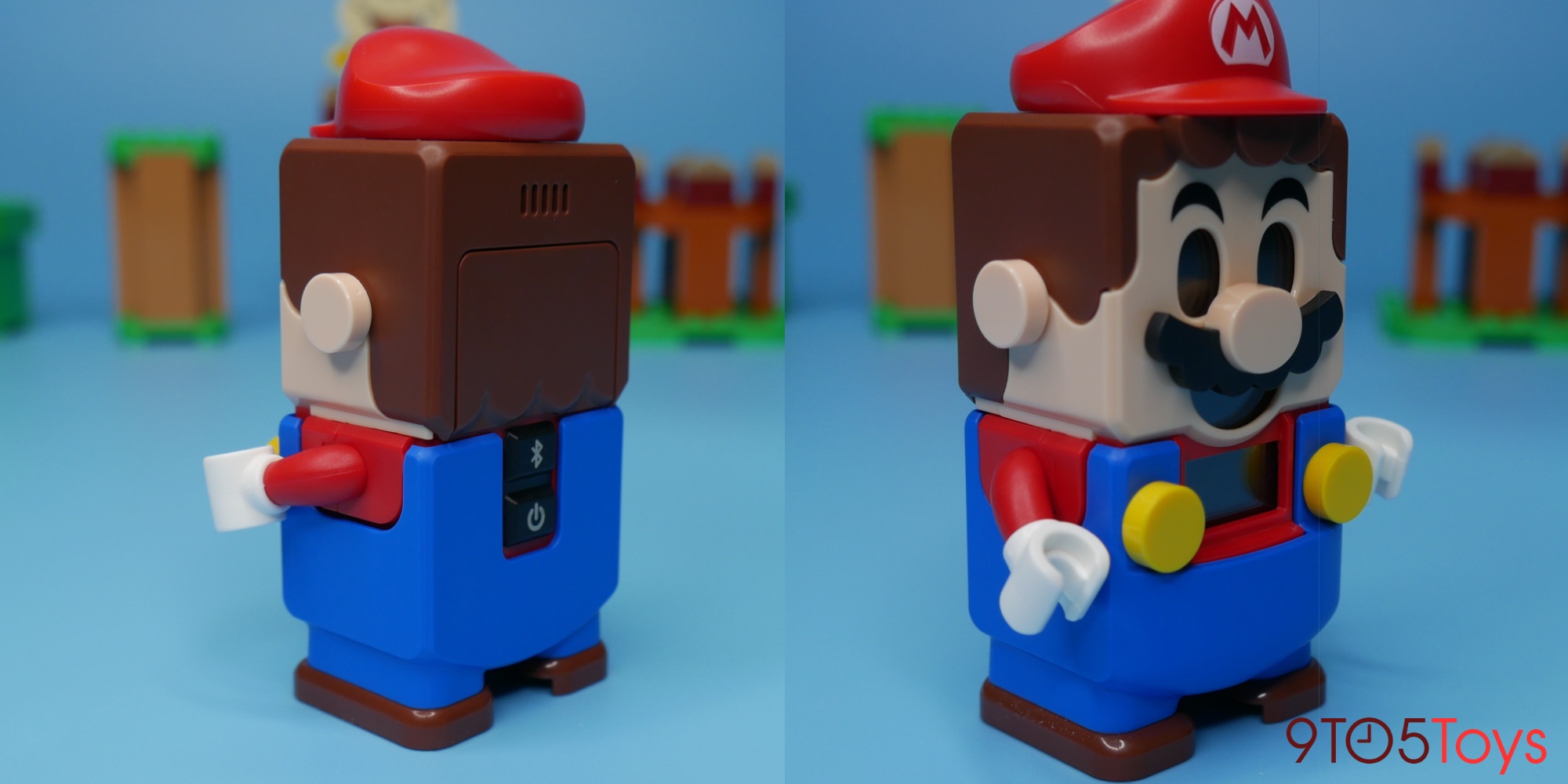 Now as cool as all the other new bricks are, Mario himself is easily the coolest part about the LEGO starter course set here. He’s comprised of two main pieces, with a few bricks that add on some additional details like his iconic hat. And for a sense of scale, Mario isn’t quite the size of a BrickHeadz figure, but is much larger than your traditional minifigure.

The more unique size allows Mario to pack some pretty interesting technology inside. Most notably, there are two LED displays that give him some interactive eyes, as well as the ability to show off some images on his chest. There’s also a built-in gyroscope and speaker, so he can make sound effects you’d find in the game when lifted up to simulate jumping and the like.

Though the coolest part is an integrated scanner at the bottom. It’s not only used to interact with the various barcode bricks noted above, but also can differential colors for giving Mario various interactions when he’s on grass-, water-, or fire-colored bricks. Lastly, Bluetooth allows for pairing with a companion app.

Arguably the biggest draw for a lot of LEGO fans is that we’re finally getting official recreations of Nintendo characters. And the Starter Course here definitely delivers on that. On top of just including Mario, you’re getting a Goomba as well as Bowser Jr. who servers as this kit’s boss. Both do their in-game counterparts justice and are wonderful additions to the kit. Plus, you’ll find iconic items like a Question Mark block, warp pipe, and power-up mushroom. 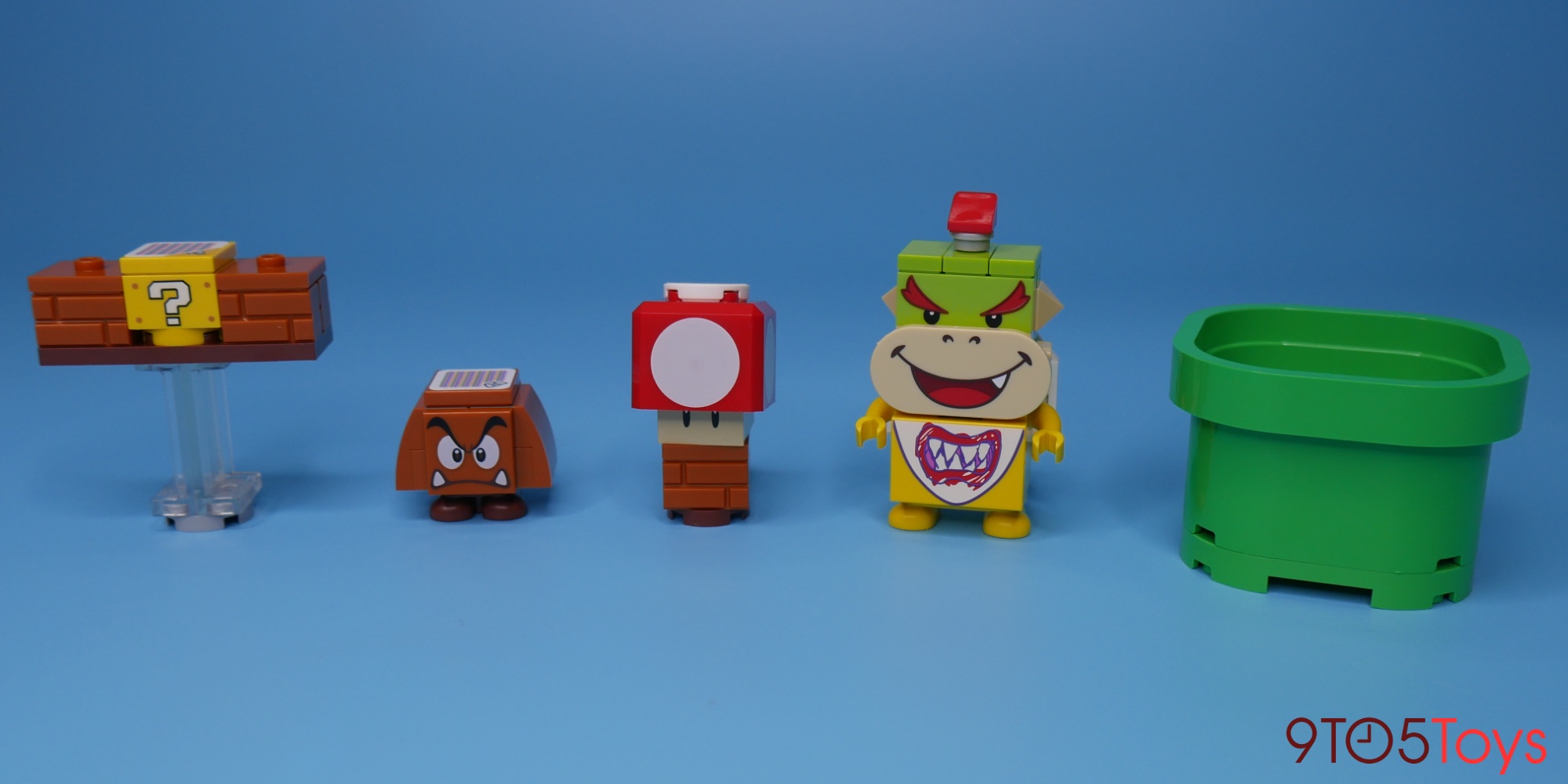 Characters aside, the big draw for the LEGO Super Mario Starter Course, and the rest of the sets from the theme, is the customization. Everything in this kit is geared towards crafting your own brick-built Mario experience that you can have him run through. Think of it as a real world Mario Maker, but with LEGO. Aside from some online leaderboards and small features in the app, it’s an entirely offline experience, which parents are sure to love.

Breaking down the overall value

Coming with 231-pieces, the $59.99 list price isn’t exactly an easy sell at first glance. The part per dollar ratio we typically use for reviews doesn’t tell the whole story on the LEGO Super Mario Starter Course, not by a long shot. While there’s certainly a Nintendo tax here, most of the included bricks are not only exclusive to this kit, but also on the larger side compared to the average set. Then when you take the electronic Mario figure into account, there’s definitely more value here than you might initially expect.

How does it compare to a usual Mario experience? 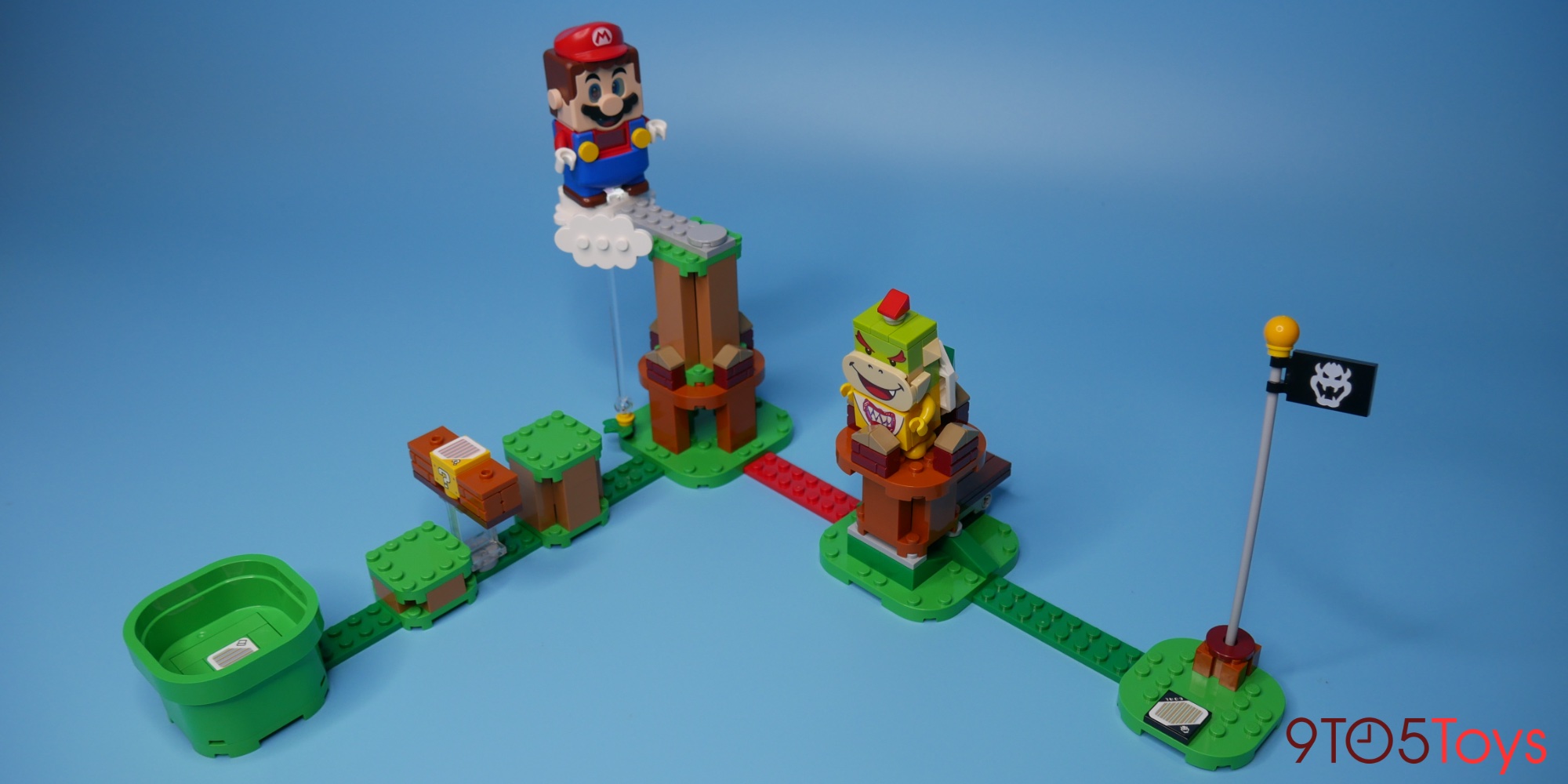 At $60, comparing the LEGO Super Mario set in this review to other creations might not be the most ideal. A better way to look at it would be the fact that you can score a Nintendo Switch title for the same price or even less. Nintendo’s recent announcement of Super Mario All-Stars also makes that $60 price tag even more competitive considering you’re getting three of the best titles from the franchise to date.

So at the end of the day, it comes down to how much you value the LEGO and offline experience. Sure there are more comprehensive ways to enjoy Mario out there, but nothing really comes close if you’re looking to put the Switch aside.

Final thoughts: Does it do Mario justice? 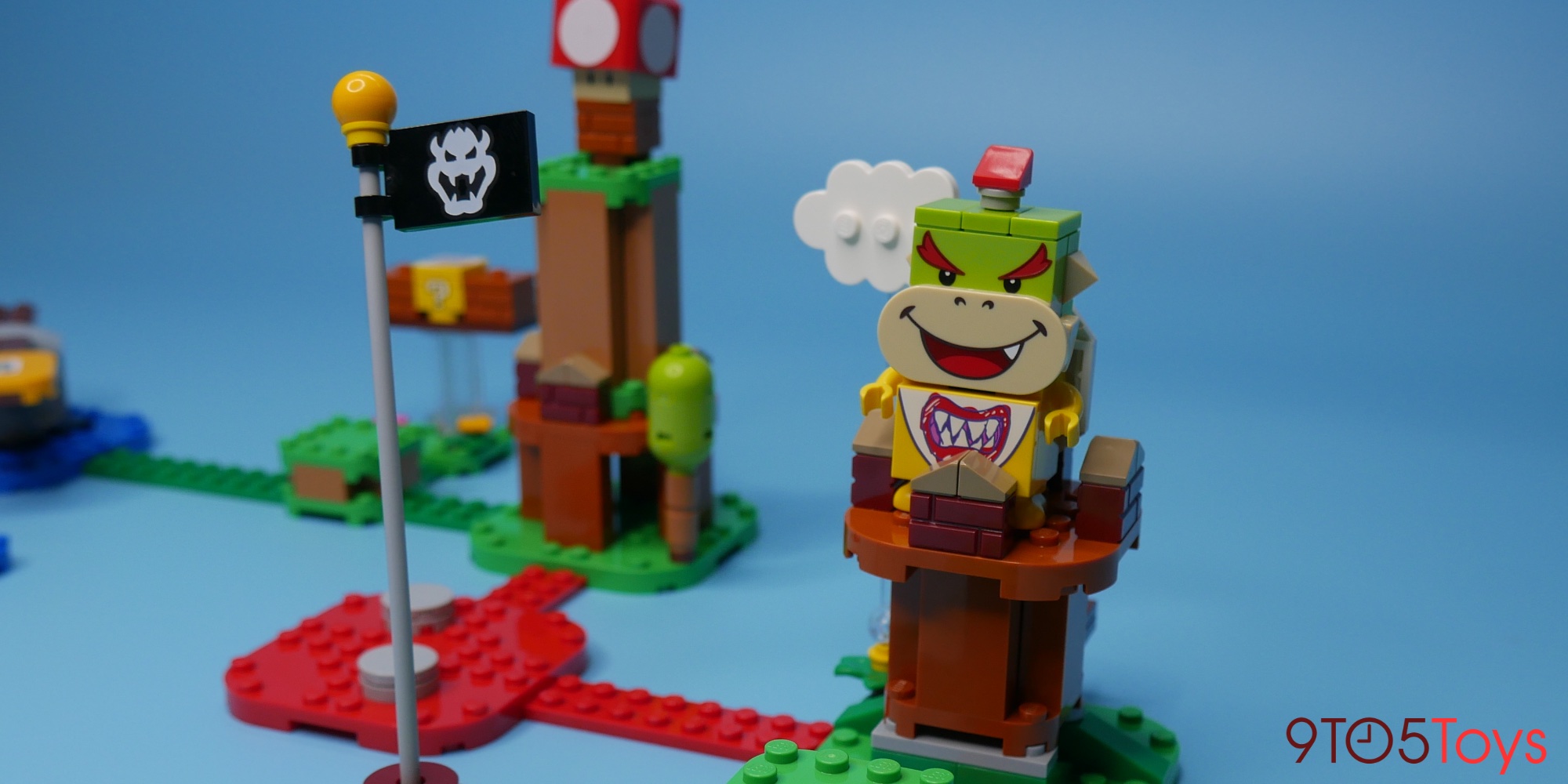 For what the Super Mario Starter Course is, LEGO has done a fantastic job bringing the classic Nintendo title to brick-built form. But the average LEGO fan might not find it to be exactly what they’re looking for out of the collaboration. It’s certainly a more kid-focused set than many others, which makes sense given that older builders have the NES to consider for some Nintendo action.

But for parents looking to get their kids an offline Mario experience, I do have to say I’m really impressed here. The Super Mario Starter Course captures the essence of being able to craft your own level in a way that I wasn’t sure LEGO could pull off. This kit is overflowing with Nintendo influence and it really shows. Even though I can easily see people buying this kit just for the characters, the full value comes from the full experience, one that I’d definitely recommend.